The United States saw worse economic growth than seven other major economies in the second quarter of 2022, according to an analysis of government statistics.

On Thursday figures from the Commerce Department revealed the U.S. economy has shrunk in two consecutive quarters, the standard definition of a recession.

America's GDP, which measures all the goods and services the country produces, dropped by an annualized rate of 0.9 percent in the second quarter following a 1.6 percent drop in the first three months of 2022.

Figures compiled by Trading Economics show that the U.S. one of the worst performing major economies, with seven of its rivals doing better from April-June of this year.

Only one major economy, lockdown-hit China, recorded worse figures in the second quarter.

Of the major countries which have released growth figures for the second quarter, encompassing April-June, Spain performed the best with an annualized growth rate of 1.1 percent.

It was followed by Italy and Mexico, both on 1.0 percent, then South Korea with 0.7 percent and France on 0.5 percent.

Germany and Singapore both recorded zero growth, although as their economies did not shrink this was still better than the U.S. figure.

The Eurozone, made up of 19 European Union members who use a common currency, also outperformed the U.S. with growth of 0.7 percent despite falling supplies of Russian gas. 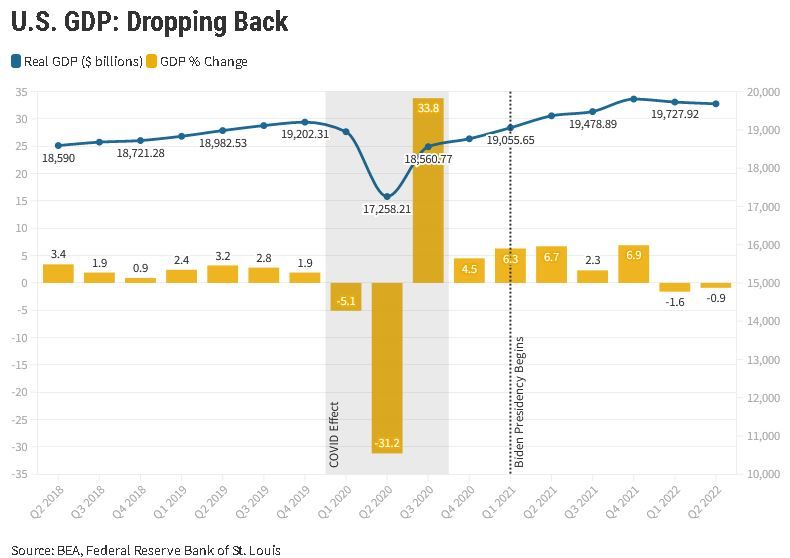 Out of the world's major economies only China, which recorded annualized growth of minus 2.6 percent, performed worse.

The figures for the country's second quarter come as it struggles with coronavirus.

Several other major economies are yet to release their second quarter statistics.

Since negative growth figures were released by the Commerce Department on Thursday the Biden administration has refused to admit the U.S. has entered a recession.

In a statement reacting to the news the President insisted America remains "on the right path" and "will come through this transition stronger and more secure".

The statement added: "Coming off of last year's historic economic growth, and regaining all the private sector jobs lost during the pandemic crisis, it's no surprise that the economy is slowing down as the Federal Reserve acts to bring down inflation.

"But even as we face historic global challenges, we are on the right path and we will come through this transition stronger and more secure."

This sparked a furious response from Republican Kevin McCarthy, the House Minority leader.

Addressing the President from the House he said: "You would rather redefine a recession than restore a healthy economy."

The National Bureau of Economic Research will confirm whether the U.S. is in a technical recession in the following months, when more data becomes available.

However, news America is suffering an unofficial recession is a big blow to Joe Biden ahead of the November mid-terms.

No Democratic President since Franklin D. Roosevelt has secured re-election after a recession broke out when they were in office.