Manchester United will be without Anthony Martial and Diogo Dalot for their trip to Premier League leaders Arsenal.

Erik ten Hag takes his team to the Emirates Stadium on Sunday as United look to take more points off title-chasing Arsenal.

The Red Devils are one of just three teams to have forced Arsenal to drop points this season, having beaten Mikel Arteta’s side 3-1 at Old Trafford in September.

United have travelled to London without influential midfielder Casemiro, who is suspended after receiving his fifth yellow card of the season in Wednesday’s 1-1 draw with Crystal Palace.

French forward Martial and Portuguese defender Dalot will also be absent for Manchester United, with the duo not travelling with their team-mates down to London on Saturday evening.

Martial was forced off at half-time during last weekend’s Manchester derby and did not feature in United’s matchday squad at Selhurst Park.

Dalot, meanwhile, has missed United’s last two games as he continues his rehabilitation from a muscular injury. 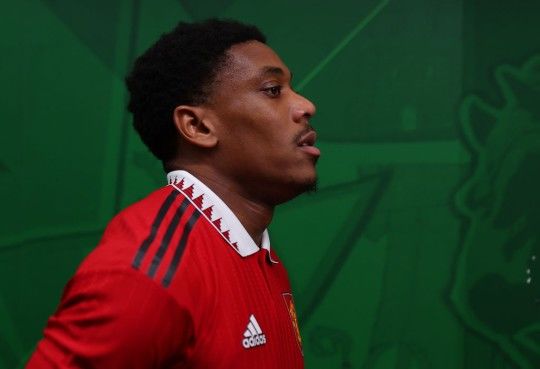 Anthony Martial broke down during the Manchester derby
The absence of Martial and Dalot will give January signing Wout Weghorst and Aaron Wan-Bissaka another chance to impress.

Netherlands striker Weghorst made his Red Devils debut against Crystal Palace, while Wan-Bissaka has begun to feature more heavily for United after being overlooked earlier in the campaign.

Meanwhile, Jadon Sancho will not feature against Arsenal despite returning to first-team training earlier in the week following a lengthy spell away from the squad.

With Casemiro unavailable, Rio Ferdinand expects Ten Hag to play Lisandro Martinez in midfield and resist the temptation to revert back to Fred and Scott McTominay.

‘There’s no getting away from the fact that Casemiro will be a big miss against Arsenal this weekend,’ Ferdinand told William Hill.

‘He’s been brilliant since he’s come in, but United did beat Arsenal without him earlier in the season, so it’s not the end of the world.

‘With him out, I’d imagine Erik ten Hag will shuffle the pack with Luke Shaw back at centre back, [Tyrell] Malacia at left back and [Lisandro] Martinez into central midfield.

‘You’d think that is the way he’ll go, and in all honesty, I’d be pretty shocked if Ten Hag went with Fred and Scott McTominay in midfield as that doesn’t seem to work.’