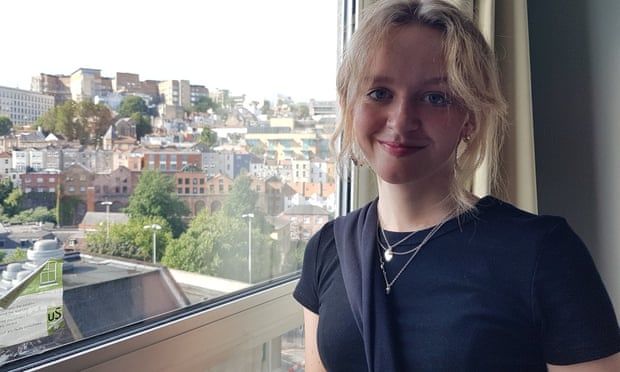 Father’s pride as teenager starts university in city where, as a one-year-old, she was treated for leukaemia

When Martin Dorey tweeted about his daughter Maggie moving into her new university halls in Bristol that overlook where she had been treated for cancer as a baby, he did not expect what followed. Since then his post has been shared thousands of times, he has appeared on Radio 4, and even reconnected with the nurses who helped save Maggie’s life 17 years ago.

He says he would have been more apprehensive if he had known, as a lot of attention has focused on his daughter as she starts university. However, he admits he understands the interest as the story of Maggie going “full circle” – returning to the city where she spent six months having chemotherapy for leukaemia – is an amazing one of survival.

Maggie was one when the family, from Bude, Cornwall, received a diagnosis of acute myeloid leukaemia. “Her mother was pregnant at the time, so Charlie, my second daughter, was born in Bristol in the same hospital [where Maggie was treated],” Martin said. His younger child was named after the nurses who saved Maggie’s life after she had a severe allergic reaction to the chemotherapy.

One of these nurses got in touch in response to the tweet. “She said she remembered Maggie and had no idea that Charlie was named after her [Charlotte] and Charlie [the other nurse],” he said. “We really appreciate what they did – it’s remarkable really. That is the power of Twitter.”

Jamie Cargill, a clinical lead nurse who also worked at the hospital and cared for Maggie, tweeted: “I remember her so well … It’s such a delight to see her grow and succeed.”

Martin said Maggie, now 18, had been overwhelmed by the attention as she started her first year studying fine art. Since sharing his family’s story, he has received messages from all over the country, with parents who lost children to cancer wishing him and Maggie well. “In any other country, we would have lost everything … but because of the NHS and what it is and does, Maggie wanted for nothing in hospital.”

He said the family had been particularly supported by a charity called Young Lives Vs Cancer, which offers free places for relatives to stay when a child is receiving cancer treatment.

“Now she has come full circle and is back where she started and it is good, it is quite cathartic,” he said. “So many people have got in touch, and some parents of those kids who did not make it have been so generous in saying that they wish Maggie luck. That is a big thing to do … It’s a good news story because she survived, but let’s not forget those who did not.

He said seeing her leave home had been “emotional”, as it is for any parent. “It’s a child going off to university and starting a new life,” he said. He did not want her cancer story to define her.

“I am incredibly proud of her and her sister. Maggie was working as a lifeguard this summer and really achieved amazing stuff, and apart from a few scars, you would not know she had had cancer. It is an emotional time, but also really positive, as she is off and having a good time, and I am really happy for her.”
Add Comment