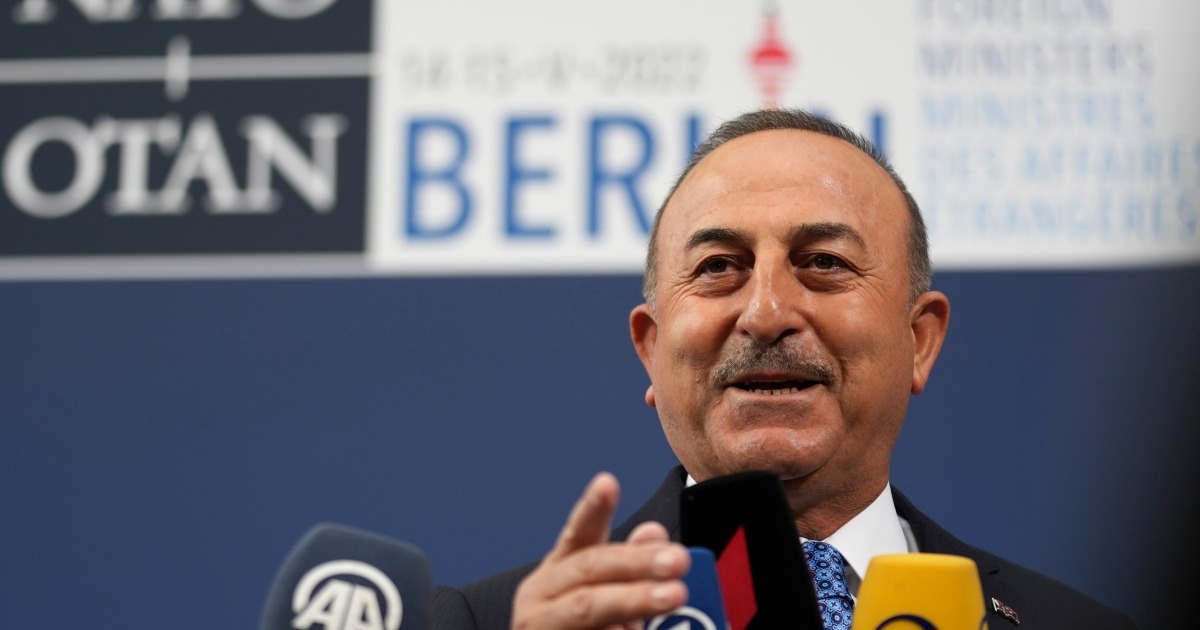 Turkey’s foreign minister has described as “unacceptable and outrageous” the support that prospective new NATO members Sweden and Finland give to the PKK, a Kurdish rebel group designated a “terrorist” organisation by Ankara and its Western allies.

The PKK (Kurdistan Workers’ Party) has waged a rebellion against the Turkish state since 1984 that has claimed the lives of tens of thousands of people, and Ankara’s criticism of Sweden and Finland has potentially complicated plans for NATO’s enlargement.

“The problem is that these two countries are openly supporting and engaging with PKK and YPG [People’s Protection Units],” Turkish Foreign Minister Mevlut Cavusoglu said on Saturday as he arrived in Berlin for a meeting with his NATO counterparts.

“These are terrorist organisations that have been attacking our troops every day,” Cavusoglu said.

“Therefore, it is unacceptable and outrageous that our friends and allies are supporting this terrorist organisation,” he said.

“These are the issues that we need to talk about with our NATO allies, as well as these countries [Sweden and Finland].”

“We have had those discussions in the alliance many times before. I think that we have always found sensible solutions, and that we will find one this time also,” he told reporters in Berlin.

“Swedish and Finnish membership is of paramount importance to the whole alliance, and ultimately also to Turkey,” he said.

“It’s a big historical moment for both nations who have been neutral for such a long time,” Vaessen said, adding that Russia’s action in Ukraine had “pushed them towards NATO”.

All 30 NATO members must approve their application and the acceptance process is likely to take several months, Vaessen said, explaining that it is during the “so-called grey period”, between application and membership, that is most concerning for both countries. During this period, Sweden and Finland will not have the collective defence protection of NATO’s Article 5, which stipulates that “an attack on one, is an attack on all”, she said.

President Recep Tayyip Erdogan’s spokesman, Ibrahim Kalin, said earlier on Saturday that Turkey had not shut the door to Sweden and Finland joining NATO, but negotiations are needed with the Nordic countries and a clampdown on what Ankara views as terrorist activities.

Turkey considers YPG, the US-backed Kurdish fighters based in Syria, a “terrorist” organisation. Ankara views YPG as a PKK affiliate.

“We are not closing the door. But we are basically raising this issue as a matter of national security for Turkey,” Kalin, who is also the president’s top foreign policy adviser, told Reuters in an interview in Istanbul.

Kalin said the PKK was fundraising and recruiting in Europe and its presence was “strong and open and acknowledged” in Sweden, in particular.

“What needs to be done is clear: They have to stop allowing PKK outlets, activities, organisations, individuals and other types of presence to … exist in those countries,” he said.

“We will see how things go. But this is the first point that we want to bring to the attention of all the allies, as well as to Swedish authorities,” he added.

Erdogan surprised NATO members and the two Nordic countries by saying on Friday that it was not possible for Turkey to support enlarging the military alliance when Finland and Sweden are “home to many terrorist organisations”.

Any country seeking to join NATO requires the unanimous support of member states. The United States and other member states have been trying to clarify Ankara’s position on Finland and Sweden.

Sweden and its closest military partner, Finland, until now have remained outside NATO, which was founded in 1949 to counter the Soviet Union in the Cold War.

The two countries are wary of antagonising Moscow, but their security concerns have increased since Russia invaded Ukraine on February 24.

Turkey, the second-largest military in NATO, has officially supported enlargement since it joined the US-led alliance 70 years ago.

Turkey has criticised Russia’s invasion of Ukraine, helped arm Kyiv, and has tried to facilitate talks between the sides, but has opposed sanctions on Moscow.

Asked whether Turkey risked being too transactional at a time of war, and when Finnish and Swedish public opinion favours NATO membership, Kalin said, “If they [Finland and Sweden] have a public concerned about their own national security, we have a public that is equally concerned about our own security,” he said.

Kalin said Russia’s sharp criticism of Finland and Sweden for their plans to join NATO was not a factor in Turkey’s position.

Russia’s President Vladimir Putin told his Finnish counterpart on Saturday that joining NATO would be “a mistake”.

“Putin stressed that the end of the traditional policy of military neutrality would be a mistake since there is no threat to Finland’s security,” the Kremlin said in a statement on Saturday.