Commuters have been warned they face a miserable Friday morning rush-hour due to the knock-on impact of the Tube strike.

Services on the London Underground are not expected to return to “normal” until mid-morning, with fewer early morning trains meaning services will be busier than usual.

Transport for London said: “Disruption will continue into the morning of Friday November 11, with affected services expected to return to a normal service by mid-morning.”

It comes after about 10,000 members of the RMT union walked out on Thursday in an ongoing dispute over pensions and the loss of up to 600 station staff posts.

This forced the closure of eight Tube lines - the Bakerloo, Circle, Hammersmith & City, Jubilee, Metropolitan, Piccadilly, Victoria and Waterloo & City - and left only “shuttle” services running on the outer branches of the Central, District and Northern lines.

There were also problems on the London Overground, with no trains on the key commuter routes between Liverpool Street and Cheshunt, Chingford and Enfield Town.

Large queues formed for buses and rail services were packed, while commuters could not board trains at some stations that also have Tube lines due to closures.

TfL said that by 2pm on Thursday passenger numbers had been only at 10 per cent of normal demand on the Underground and down 86 per cent on the previous week as the strike took its toll.

But there was a 16 per cent increase in demand for buses - taking it to 93 per cent of normal levels.

Previous Tube strike days have resulted in the number of passengers using the Underground plummeting to as little as four per cent of normal.

The Elizabeth line came to the rescue of many travellers by offering a regular service between Heathrow, Shenfield and Abbey Wood via central London.

At Liverpool Street, there was a 43 per cent increase in Elizabeth line passengers but a 30 per cent reduction at its new station at Bond Street, showing how the West End suffers during a Tube strike.

Thameslink’s north-south route through central London was also running but many rush-hour trains were packed, and unable to stop at stations such as Finsbury Park that are run by TfL.

Members of the Unite union also took part in the strike, the sixth 24-hour walkout on the Tube in 2022. The RMT had already brought the Tube to a standstill on March 1 and 3, June 6 and 21 and August 19.

Mr Leach told the Standard: “If these pensions are attacked and jobs are cut and people’s contracts and conditions of employment are put in jeopardy and made worse, we will keep going.”

Asked who was to blame for the disruption, Mr Leach said: “The people in power are to blame. It’s the Government that is starving Transport for London of the funding it needs. 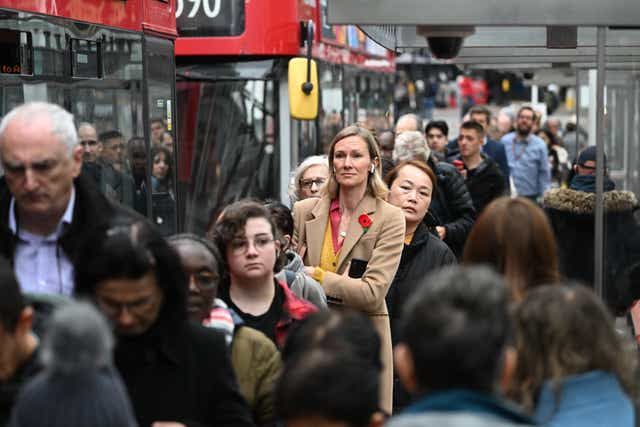 The scene at Victoria station earlier on Thursday
“Then we have got a mayor of London who seems to want to face everywhere apart from leading his staff. The staff pension fund has been put on the table in negotiations to deliver a bailout.

“The problem with that is that it is dependent on their being millions of pounds of savings, which means our pensions getting worse, and we are not having that.”

Mr Khan said he had been forced to agree to “onerous” conditions in order to secure £6bn in Government bailout funds for TfL.

“Nobody wants to see strike action and I have repeatedly urged the unions to call off this action and work with TfL to find a resolution.,” he said.

“This industrial action is having a serious impact on London’s businesses and commuters, at a time when we’re working hard to boost the capital’s economic recovery in order to help us continue building a better, greener and more prosperous London for everyone.”