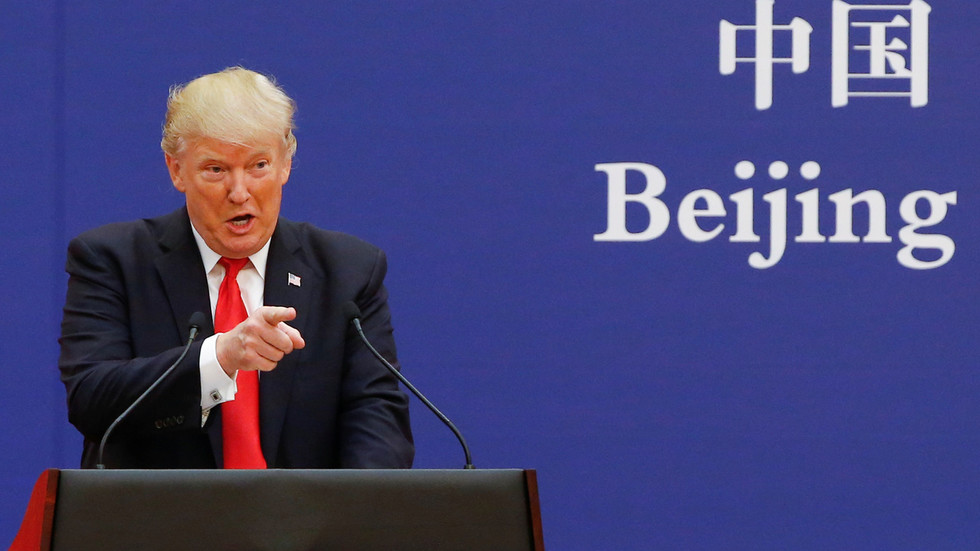 “I will Veto the Defense Bill, which will make China very unhappy,” Trump tweeted on Thursday. “They love it. Must have Section 230 termination, protect our National Monuments and allow for removal of military from far away, and very unappreciative, lands. Thank you!”

The National Defense Authorization Act (NDAA) passed the Republican-controlled Senate on Friday, despite facing opposition from some pro-Trump Republicans. The $740-billion legislation previously passed the House of Representatives, but according to Trump it will die on his desk.

Trump initially called on Congress to include a passage in the bill repealing Section 230 of the Communications Decency Act, which shields social media companies from legal action over content posted on their platforms. Trump and his allies argue that these companies’ censorship of the president – attaching warning labels to his tweets about alleged election fraud, for example – make them “publishers” and not “platforms.”

Two days earlier, Sen. Lindsey Graham (R-South Carolina) announced that he would introduce a bill repealing the controversial section, claiming Silicon Valley tech giants would “destroy conservatism” unless their power is reined in. If his bill were to become law, Graham told Fox News’ Sean Hannity, conservatives could “sue the bastards when they try to censor content.”

Trump’s other gripes with the NDAA include its lack of a provision protecting Confederate monuments from removal and banning the renaming of US military bases bearing Confederate names, as well as its inclusion of an amendment forbidding the withdrawal of troops from Afghanistan without congressional approval.

The latter amendment was written by Liz Cheney (R-Wyoming), daughter of ‘War on Terror’ architect Dick Cheney, and was criticized by libertarian Sen. Rand Paul (R-Kentucky) for guaranteeing “perpetual war” in Afghanistan.

What China stands to gain from the bill, however, is unclear. Given that the NDAA affirms US support for India in its ongoing border struggle with China and allocates billions of dollars for deterrence measures against China in the Pacific, it’s likely that Trump is simply attempting to drum up support for a veto any way he can.

Its boost to military spending, along with pay raises for US troops, will “keep our forces ready to deter China and stand strong in the Indo-Pacific,” Senate Majority Leader Mitch McConnell (R-Kentucky) said before the Senate passed the bill.

If Trump keeps his word and vetoes the bill, it will be kicked back to the Senate for changes, or for senators to secure a larger, veto-proof majority. The president has until December 23 to veto the bill.