Tributes were paid to Her Majesty Queen Elizabeth II on day three of the third Test between England and South Africa at The Oval.

A minute's silence was observed before the national anthems, with God Save The King followed by sustained applause from the crowd.

Players from both sides and the match officials are wearing black armbands.

No play was possible on day one because of rain before day two was called off as a mark of respect.

The match has therefore begun on the third morning, with South Africa batting after England won the toss on Thursday.

There were discussions over extending the match into a sixth day on Tuesday but that was ultimately not deemed possible because of the tourists' plans to travel home.

The series is level at 1-1 after an innings victory apiece in the opening two matches.

Spectators attending the Kia Oval were asked to be in their seats 30 minutes before the scheduled start of 11:00 BST in order to observe the tributes to Her Majesty.

Similar tributes were paid later in the day, before England played India in the first women's Twenty20 international at Chester-le-Street.

Both teams observed a minute's silence, followed by a rendition of God Save The King.

At The Oval, the players and umpires entered the field through a military guard of honour before the ground fell silent.

The period of silence was ended by a single chime of a bell from the highest ranking military official in attendance, Senior NCO Robert Brockelsby Miller of the Irish Guards.

Singer Laura Wright performed the anthems, firstly of South Africa before God Save The King, both a cappella. Movingly, the Oval crowd joined in with the new anthem of the United Kingdom.

Applause followed, only ended when James Anderson delivered the first ball of the match.

"It's always very special to stand on the ground and sing the national anthem and obviously today will have even more on it," England captain Ben Stokes told the BBC before play.

"The national anthem might be sung a little bit louder than it is normally, and rightly so.

"It's great knowing that we're going to be playing this game, not just for us but in memory of the Queen, so it's a very special occasion for us."

The Oval sits on land owned by the Duchy of Cornwall, responsibility of which is passed on to the new Duke of Cornwall, the Prince of Wales.

Spectators have been prevented from attending in fancy dress for the remainder of the match and sales at bars are restricted to two drinks per person. 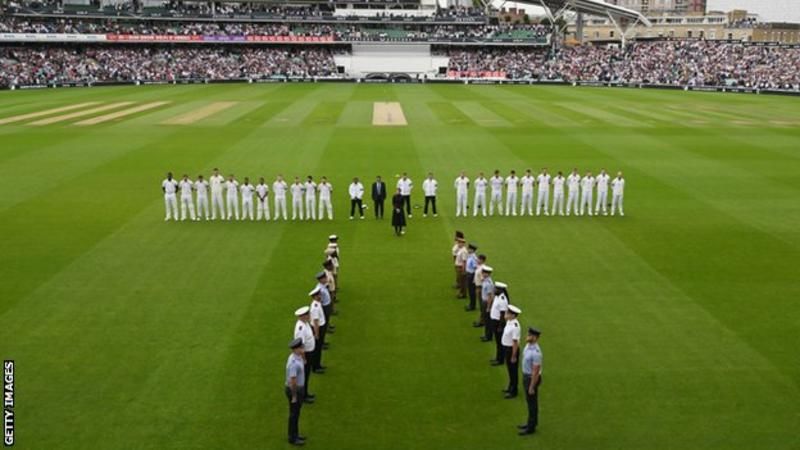