A series of strikes by railway workers planned for 5, 7 and 9 November has been suspended, the RMT union has said.

But Network Rail warned that the late notice meant services on Saturday would remain "extremely limited", and trains on Monday are likely to be affected.

The RMT, which represents rail workers, said it would now enter "a period of intensive negotiations" with Network Rail and train operating companies.

The strikes had been called in a dispute over pay and conditions.

They involved staff at Network Rail, which employs signalling workers across England, Scotland and Wales, as well as workers at 14 train companies.

The action had been expected to have a major impact across the network, with only a fifth of services due to run.

The suspension is a significant development, as it is the first time in the RMT's long-running dispute that a strike has been called off to make further talks easier.

Another transport union, the TSSA, had already called off November action at Network Rail so that discussions could continue, and on Friday suspended planned rail strikes on Saturday, Monday and Wednesday at different firms.

It had planned to take strike action at five train firms including Avanti West Coast and West Midlands Trains.

Avanti said on Friday it would not reinstate services on Saturday, Monday and Wednesday.

West Midlands Trains said a reduced timetable will remain in place for at least Saturday and Monday.

However, the cancellation of the strikes has come "too late" for thousands of rugby fans travelling to Cardiff for the Wales v New Zealand autumn international, Network Rail Wales said.

There will be fewer trains before the game, and none leaving Cardiff after it has finished.

Tom and Lydia Ellis, who are from New Zealand but living in Bristol, will have to take a bus to get to the game.

"I won't be fully relaxed until we're in the stadium," said Mr Ellis.

ScotRail will only run a skeleton service on Saturday, with the rail operator warning of significant disruption to its services. Only 11 of its routes will remain open.

And a London Underground strike planned for Thursday is still set to go ahead.

"We have always wanted to secure a negotiated settlement and that is what we will continue to push for in this next phase of intensive talks.

"Our priority is our members, and we are working towards securing a deal on job security, a decent pay rise and good working conditions." 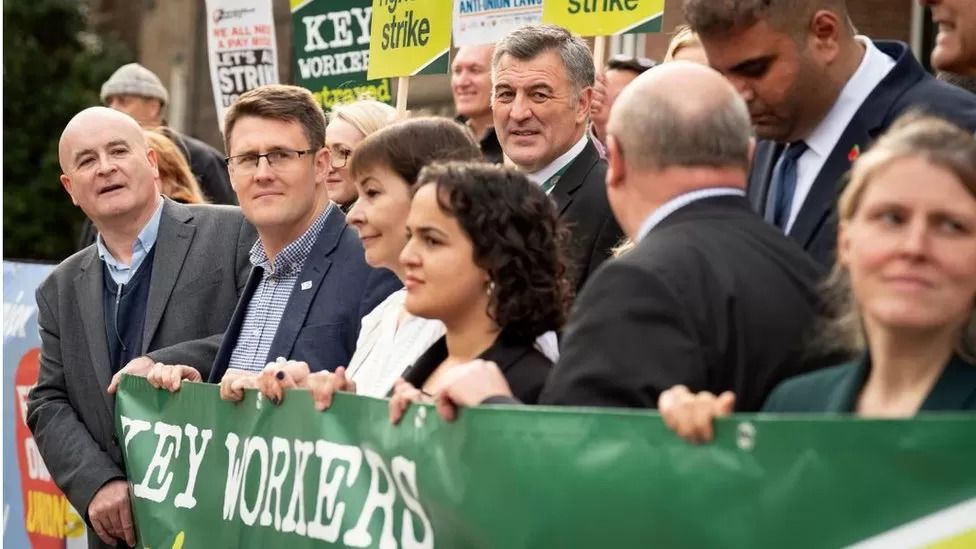 He added that there had been "the promise of an offer" on pay from the rail operating companies.

However, when contacted by the BBC, rail employers and the government said their position had not changed.

The suspension has been announced 11 days before a fresh RMT strike ballot is due to close on 15 November.

Mr Lynch previously told the BBC that he expected workers to vote in favour, and warned that there could be strikes for another six months if no agreement is reached.

He said Network Rail "look forward to getting back round the table with all our trades unions early next week to see if the progress made this week can be built on, and a resolution found."

Network Rail continues to advise passengers to check before they travel, and to only travel by rail if absolutely necessary on Saturday and Monday.

Mr Shoveller said on Monday there will be "limited ability" to change the strike timetable.

Transport Secretary Mark Harper said suspending the strike action was "a positive development for passengers up and down the country".

He added that calling off the latest ones has given negotiations between unions and employers a "better chance of success".

The Rail Delivery Group (RDG), which represents train companies, said that it was "positive" that the RMT had "stepped back from the brink".

Rosters for drivers are typically agreed a week in advance, and so the "short notice cancellation" of the strikes "means that train driver availability will inevitably be very challenging and rely primarily on volunteers", the RDG added.