Services have been severely disrupted in recent months as the row over pay, working conditions and job security has continued.

But the RMT said the latest strike action would send "a clear message" that workers want a better deal.

Its members at Network Rail and 14 train companies voted last week in favour of further walkouts.

More than 40,000 RMT members are expected to take part, the union said, after its bosses held a meeting on Tuesday to decide on the latest dates.

The RMT said there would also be an overtime ban from 18 December until 2 January, meaning the union will be taking industrial action for four weeks in total.

The strikes mean passengers will face disruption in the run-up to Christmas and while travelling to events such as performances by comedian Peter Kay in London and Birmingham on 16 and 17 December, as well as Paolo Nutini's gigs in Glasgow on 13, 14 and 16 December.

It also includes signalling staff, which means it is likely that only a small minority of services will run on main lines, while smaller branches will have no trains at all.

Separately, the Aslef union, which represents drivers, is holding another strike on Saturday 26 November in a dispute over pay. It affects 12 train companies.

In a statement, the RMT's general secretary Mick Lynch said: "Our message to the public is, we are sorry to inconvenience you, but we urge you to direct your anger and frustration at the government and railway employers during this latest phase of action."

The RMT suggested that Network Rail, which maintains the railways throughout Britain, had failed to make an improved offer during the last two weeks of talks. The union suspended strike action due to take place in early November, following what it said was a promise of an offer.

Network Rail's chief negotiator Tim Shoveller said: "No-one can deny the precarious financial hole in which the railway finds itself.

"Striking makes that hole bigger and the task of finding a resolution ever more difficult," he said, adding that the organisation was still hoping for a "breakthrough" during negotiations.

The RMT union also accused the government of "directly interfering" with attempts to reach a settlement.

But the Rail Delivery Group, which represents train companies, said: "We made real progress over the last fortnight of talks, and for the first time in months we can see the outline of a credible deal."

Its spokesman called on the RMT union to "stay at the negotiating table" for the benefit of passengers travelling or shopping over the festive season, as well as businesses in hospitality and retail who are dependent on trade at this time of year.

The RMT union has already held eight days of strikes since June, which have caused widespread disruption.

Claire Smith, a hotelier from Blackpool, said further strikes would be "very disruptive" to the hotel trade in the Lancashire seaside resort. 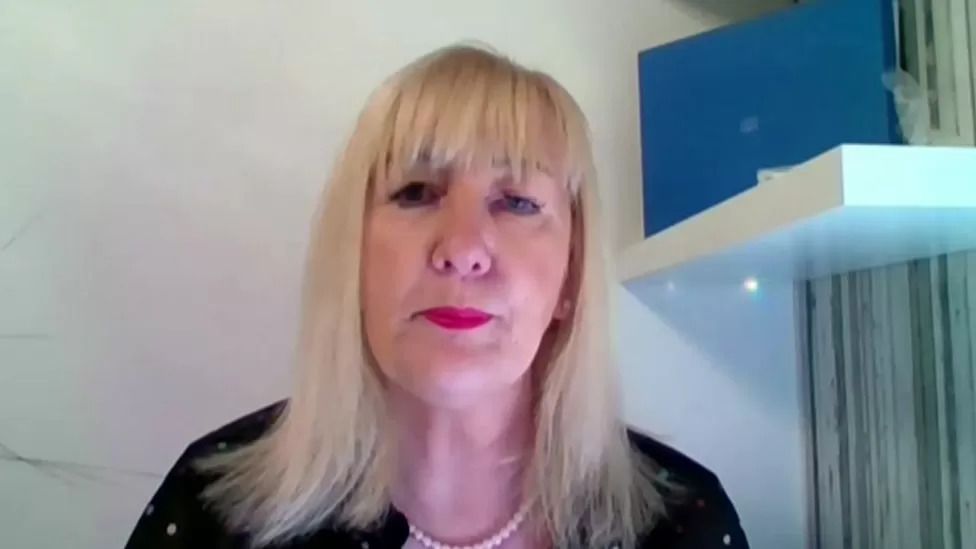 Blackpool hotelier Claire Smith says hotels have been put in a very difficult position by the strikes
She said that despite action in the summer it had been a "good season", partly due to the widespread chaos at airports due to staff shortages.

"But now is a very different situation," she said.

People are cutting back due to cost of living pressures, Ms Smith said, and the beginning of the year up to Easter is normally a lean time for hotels anyway, so "anything that's going to add to the difficult times" is "going to have a huge impact, because we're all struggling".

"So we're put in a very difficult position by this," Ms Smith added.

"December is a very busy period for us. It's our last bite of the apple.

"Of course we have huge sympathy for the strikers, and just wish they would do more negotiating round the table."

The rail industry is under pressure to save money after the pandemic left a hole in its finances. Bosses say reforms need to be agreed to afford pay increases and modernise the railway.

But unions say salaries should increase to reflect the rising cost of living.

A spokesperson for the Department for Transport criticised unions involved in the strikes, saying: "Strike action risks putting the very future of the entire industry in jeopardy.

"The rail industry is facing serious financial challenges and is in desperate need of vital reforms to address them.

"We once again urge union leaders to work with employers and come to an agreement which is fair for passengers, taxpayers and workers alike."

Earlier this month, Rail Minister Huw Merriman estimated that strike action had cost the railways about half a billion pounds so far this year.