Hong Kong rail giant the MTR Corporation has come clean and admitted that evacuation arrangements were mishandled after Sunday’s train derailment where people were put in danger by mistakenly using an emergency exit to leave carriages and walk along tracks in a dark tunnel before traffic was halted.

MTR Corp operations director Tony Lee Kar-yun apologised again for the miscommunication and “totally undesirable” situation on Wednesday, while lawmakers expressed shock about the lack of a protocol to automatically stop nearby trains after accidents and warned the consequences could be serious.

Two sets of carriage doors were ripped off in the accident as the train pulled up alongside the platform at Yau Ma Tei station, with hundreds of passengers evacuated and services knocked out on part of the Tsuen Wan line for the rest of the day. 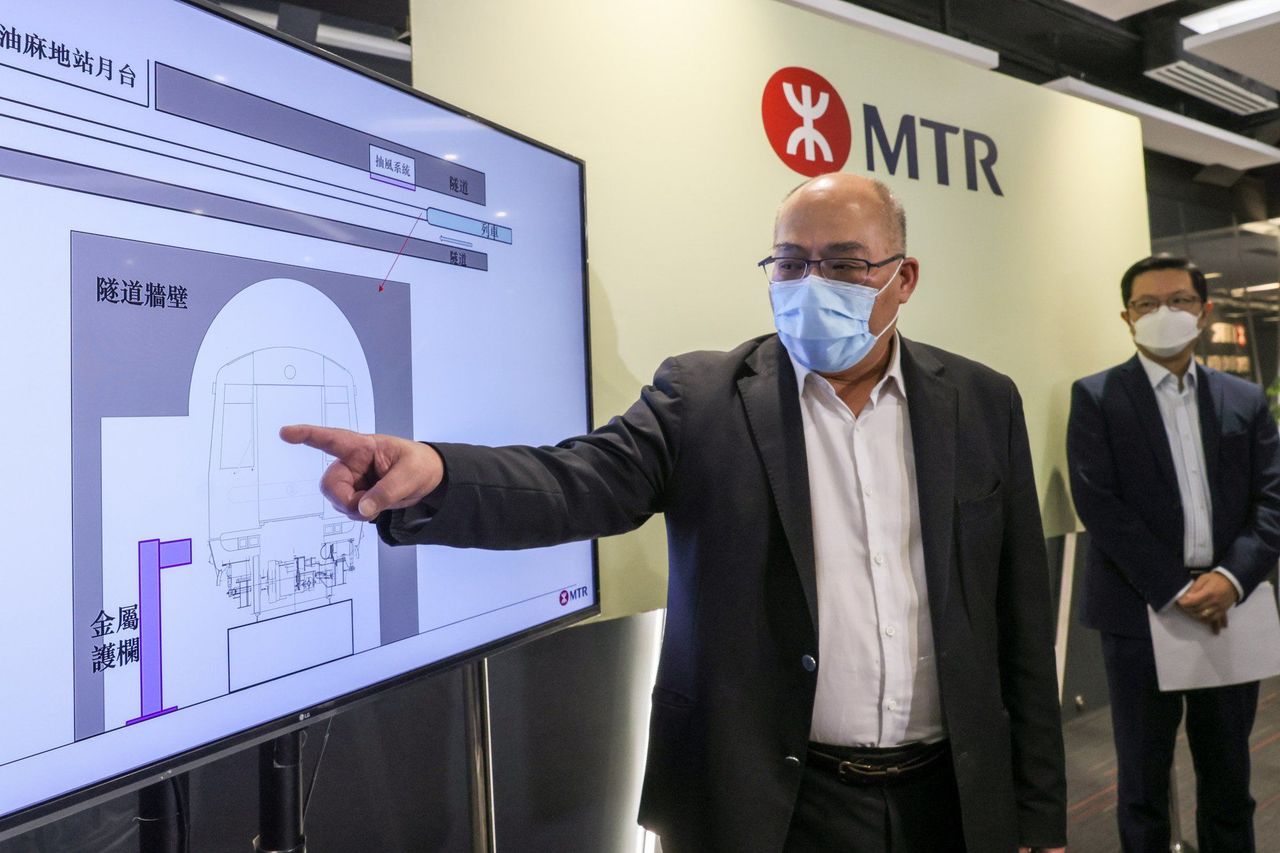 Operations chief Tony Lee has apologised over the incident.
Lee said the driver was not alerted about the passengers’ use of the emergency exit ramp as the train’s alarm system had also broken down. When station staff finally reported the matter to the operations control centre, it failed to immediately halt incoming trains on the Kwun Tong line from passing through the tunnel.

“There was a time gap before the operations control centre managed to halt any traffic inside the tunnel. As a result some trains of the Kwun Tong line had passed along the tunnel,” he said.

“We apologise for putting the passengers through this sort of experience. This situation was totally undesirable.”

Lee’s admission appeared to be a climbdown from the company’s previous stance. The MTR Corp had earlier defended the evacuation arrangements, with operating and metro segment chief Sammy Wong Kwan-wai saying the emergency exit was designed to allow travellers to leave carriages safely under urgent circumstances.

The company had previously refused to make clear whether staff were deployed to the tunnel.

The rail giant has submitted an interim report on the incident to the government.

Lee said the control centre’s original intention was to arrange for passengers to return to the Yau Ma Tei station platform using the carriage doors with the help of staff.

But he said “inadequacies” in their broadcast messages had failed to indicate clearly the evacuation arrangements to passengers, resulting in some people getting off the train by pushing open the emergency exit and walking towards Mong Kok station.

There is a section between the two stations where the Tsuen Wan and Kwun Tong lines overlap.

Lee’s apology came after the rail giant submitted an interim report on the incident to Secretary for Transport and Logistics Lam Sai-hung, covering the initial cause of the derailment, its follow-up action and how the firm handled the overall situation. It is due to submit a full investigative report in two months.

The firm has set up an investigation commission comprising local and overseas experts to look into the incident.

He said the initial investigation found the derailment happened after a displaced metal fence, seven metres long and 2.4 metres high located by the side of the tracks, caused the front carriage to veer off the rails as the train pulled into Yau Ma Tei station.

“As to why this metal fence was displaced and ended up crashing the train, we will conduct an in-depth investigation into different aspects such as the maintenance of its components, its original design intent and its tear and wear,” Lee said, adding that the company had checked 30 such fences, used to protect facilities including the ventilation system, along its tracks.

An insider said rail staff at present conducted checks on the metal fence by sight on alternate days under the company’s instructions.

“The MTR Corp doesn’t request the staff to check the metal fence with any equipment so they conduct the checks with physical detection only. But the fence is large in size and it will be easily detected if it has loosened,” the source said.

Lawmaker Michael Tien Puk-sun, former chairman of the Kowloon-Canton Railway Corporation, expressed shock over the lack of an emergency protocol to automatically halt traffic in cases where a train had got stuck in a tunnel.

“This fiasco was really serious. I was shocked to hear the operations control centre had to be alerted by the train driver before it could halt the tunnel traffic. What would happen if the driver lost consciousness?” he said.

“There should be a protocol in place to ensure that once a train gets stuck inside the tunnel, all the nearby traffic will automatically be halted to ensure passengers’ safety.” 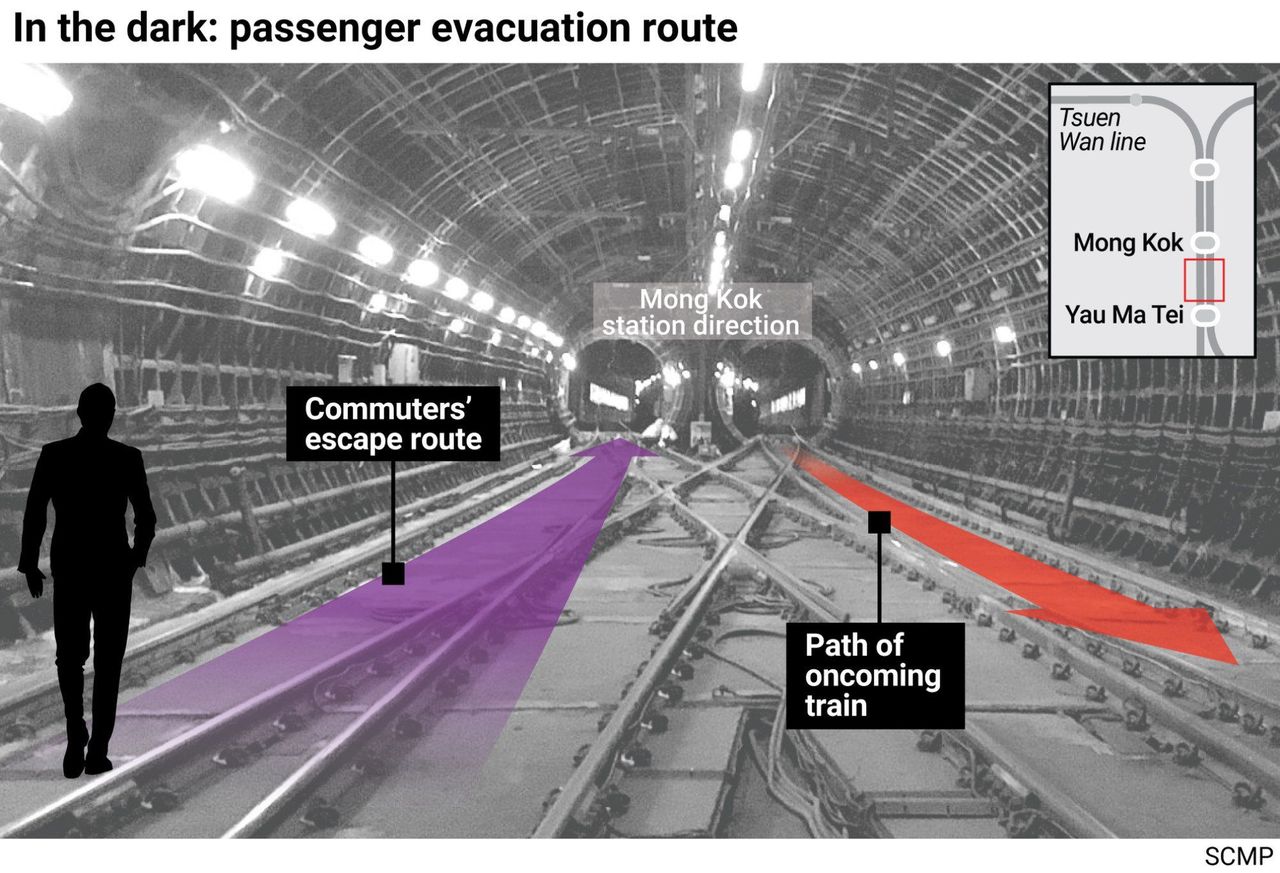 Legislator Gary Zhang Xinyu, an engineer who served as operations manager at the MTR Corp, said the fact passengers left the train unnoticed at the rear showed there should be an independent alert system for the emergency exits as the regular one had been knocked out in the crash.

He said the potential risks facing the passengers walking on the tracks could have been avoided if the train operator had been alerted immediately about the situation and initiated the safety response including stopping traffic along the line and turning on tunnel lighting.

According to what he had learned, the broadcast from the train operator during the incident instructed passengers to wait at the rear for further instructions from station personnel to help leave the train via the platform at Yau Ma Tei station, but he said he believed some of them might have opened the emergency doors and left before staff arrived.

In a statement on Wednesday night, a spokesman for the Transport and Logistics Bureau said it had received the preliminary report on Wednesday and the firm had to submit a detailed one within two months.

“The preliminary report gave an account of the incident, initial findings on its cause, and MTR Corp’s immediate incident handling and future follow-up work,” the spokesman said, adding relevant government departments would take part in the investigation.

“The bureau has requested the MTR Corp to review the relevant arrangements immediately to ensure proper handling of incidents and protect passenger safety.”