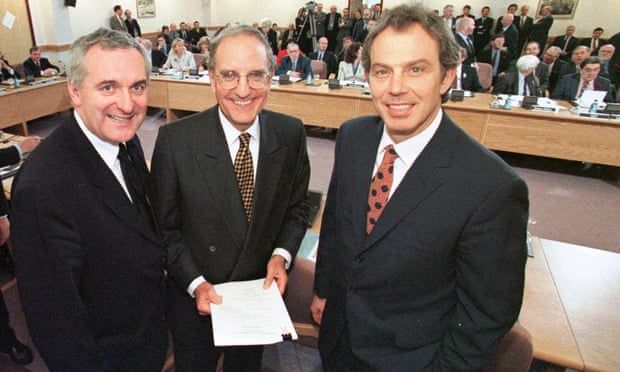 Tony Blair’s “apology” for the Irish famine on its 150th anniversary, greeted with plaudits and hailed as a significant moment in Anglo-Irish relations at the time, was hastily written by aides because they could not reach him to approve it, newly released classified documents reveal.

The prime minister’s words, read out by actor Gabriel Byrne at a televised commemoration event in County Cork, were damning in proclaiming: “Those who governed in London at the time failed their people through standing by while a crop failure turned into a massive human tragedy.”

The Irish press saw it as the long sought after apology refused by previous UK governments, while taoiseach John Bruton said “The prime minister is to be complimented for the thought and care shown in this statement.”

Yet a note to Blair from his principal private secretary John Holmes, released by the National Archives, shows that with the deadline imminent for the message to be sent Blair was uncontactable.

“I tried to clear the principle of this with you this afternoon by telephone, but you were not around at the time. In order to meet the organisers’ deadline, therefore, and to avoid the impression of a snub, I approved the attached text off my own bat and gave it to our embassy in Dublin,” wrote Holmes.

“The key sentence in your message is the acknowledgment that the British government at the time could have done more to prevent the tragedy. This is no more than a statement of fact, and falls well short of an apology, but the British government have been reluctant to say much about this in the past,” added Holmes, who said he had checked with “all and sundry” including press secretary Alastair Campbell that it was right to make such a reference.

“I hope this does not cause you any problems. It should go down well with the Irish, and I cannot see anyone here or in Northern Ireland seriously objecting.”

The text was honed by No 10 aides from a draft by the Foreign Office. An implicit apology was exactly how it was interpreted by the welcoming Irish press who saw it as an attempt to inject fresh goodwill into Anglo-Irish relations and encourage the peace process.

“In all the circumstances events could not have turned out better. The statement, which focuses on undeniable facts, is widely perceived as the apology long sought by many Irish people,” wrote the British ambassador to Ireland, Veronica Sutherland in her subsequent cable. Bruton said: “While the statement confronts the past honestly, it does so in a way that heals for the future.”

The British government had refused to send large-scale food aid after the first year of the famine because it would cost too much and hurt agricultural prices.

A Foreign Office briefing note acknowledged the commemoration of the Irish famine had always been a “difficult issue in presentational terms” with a “vocal minority” in the Irish Republic and in the U.S “determined to vilify the actions of the British government” of the time and placing it in the context of continuing British crimes against Ireland, adding: “This is not a battle we can win.”
Add Comment