The acclaimed chef talks to David Ellis about the effect of food poverty on schoolchildren, and why the Feed the Future drive matters

Tom Kerridge is perplexed. “Look, in the past three years, £17million has been spent on subsidising MPs’ meals in the Houses of Parliament — 17 million quid!” he says, his voice tightening. “So we’ve got the MPs eating subsidised lunches and dinners, but we’re not giving free school meals to kids whose parents are on Universal Credit…” The chef shakes his head in bewilderment. “And you know, if you think that’s correct, then we’re at a wrong point in society.”

Sat in his bar and grill at the Corinthia hotel, Kerridge is on rattling form as he explains his support for extending free school meals to all children in poverty, whose plight was exposed by our special investigation and which has led to calls for change by a coalition of campaigning groups led by the Food Foundation. This campaign, called Feed the Future, calls on the Government to extend free school meals to all pupils in England whose parents are on Universal Credit — a move that would help the 800,000 children who, though they live in poverty, are not eligible for a free lunch. “If you qualify for Universal Credit, I’d have thought you qualified for your kids to get a meal,” says Kerridge. “I was… surprised. It’s like we’ve got a lost generation of 800,000 children, and we know they’re the most vulnerable in society.”

Surprising, too, is the threshold for free meals. Only households with an income below £7,400 after tax (excluding benefits) are eligible — and, astonishingly, this is regardless of the number of children in the family. This threshold has remained since 2018 which, given the spiralling cost of living, looks cruel. The cost of food and drink this year alone has risenmore than 13 per cent.

“The parents might be working two or three jobs, they might still be having to use food banks, but their children still won’t qualify,” Kerridge explains. “And then what happens is that those children, those 800,000 kids, are either not getting a meal or they’re getting a packed lunch — but that packed lunch is being made up of nutritionally unbalanced things, of cheaper, poorer quality ingredients [than in the school meal].”

Many parents, especially those working irregular hours or on zero-hour contracts, are too short on time to shop for and prepare a proper packed lunch, or in some instances lack the know-how.

Kerridge sees this first hand; the chef has been visiting schools since he worked with footballer Marcus Rashford for their celebrated Full Time campaign, which aims to end food poverty for children in this country. He was last in a London school just a couple of weeks ago. “The packed lunches that they’re gonna have, they are essentially crisps, some sort of sweets, a chocolate bar, really badly made sandwiches with non-nutritional styles of bread or filling — or sometimes, nothing at all,” he says. “So for some of these children, the only meal that they will eat in a day — and the only guaranteed hot one — is going to be that free school meal. And it’s not parents not giving them one because they don’t want to, this is because they physically cannot afford it.” He says it’s not unusual to see children turning away from their friends at lunchtime, embarrassed by the food — or lack thereof — that they’ve been sent to school with. 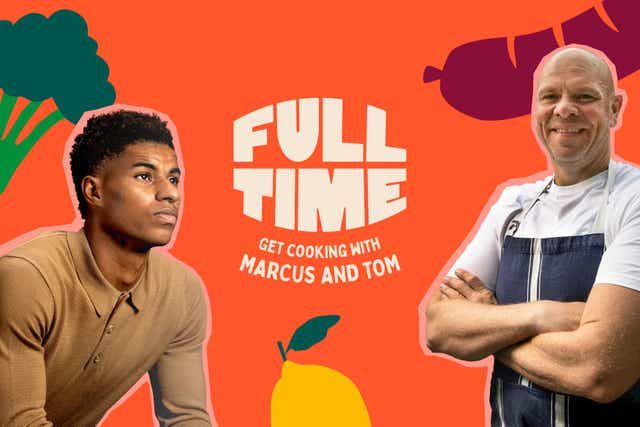 School dinners, the chef stresses, have come a long way in recent years. “In my day — and we’re talking what, 30, 40 years ago? — everything was just beige. And everything about it all felt a bit prison-like, everything slopped out onto your aluminium trays of stuff.” He lets out a laugh. “But now we have a much better understanding of nutrition, of balancing foods. Schools are presenting options; there are salads there, fruits there. The other day, I was in a school where a dessert was pretty much 100 per cent banana. Kids are always going to go for the sweet stuff but it’s about making it fruit-focused. Basically, I don’t think school dinners are that bad, but what I do think is we need to provide them pretty much for everybody.”

The impact of a good meal goes a long way, says Kerridge. “It’s not just those 800,000 who benefit,” he explains. “Actually, every child that’s at school does, because we all know that if you’re hungry and not hydrated, your behaviour is affected: your concentration levels and distraction levels go all over the place — and they can become disruptive, you know? And then the teacher’s time is then spent on the disruptive kids, instead of with the whole class.”

A well-fed child tends to be better behaved, Kerridge says, so the individuals getting the meal gain, but so do their schoolmates. “But those going without; they’re distracted, they’re uncomfortable, they’re suffering. They’re anxious and have that level of insecurity that comes with food poverty — they’re nervous, they’re worried about where the next meal is going to come from. If you’re not getting fed properly, you’re not going to perform.”

The parents might work two or three jobs and still use food banks, but their children dont qualify for free meals

Action is needed swiftly, too, with a recent study from the Food Foundation concluding that more than one in four UK households experienced food insecurity in September — meaning they do not have access to a healthy diet they can afford. An estimated four million children are thought to be affected. And too few children are healthy enough as it is: surveying the 2021/2022 school year, the NHS reported that one in four children leave primary school with obesity, with those from low-income areas twice as likely to be. Something must change.

That broader impact, though, will be felt beyond the classroom; there is a reason the campaign is called Feed the Future. PwC’s cost benefit analysis of the campaign concluded that over 20 years the economy would profit from a net gain of £2.4 billion, with a return of £1.38 for every £1 invested. But for Kerridge, things are simpler than all that. “As a society, surely we want a better education system, and that includes kids eating properly. It makes such a big difference in society; you build from the bottom up, you build a foundation.”

As part of his support, the chef today was lending his hand at Central Hall in Westminster, at a Feed the Future event organised by the Food Foundation. MPs — some of those who benefit from the subsidies Kerridge talks of — were fed a school dinner, while disadvantaged young people spoke of the impact poverty has had on them; the stigma they’ve faced, the divide they’ve come up against. 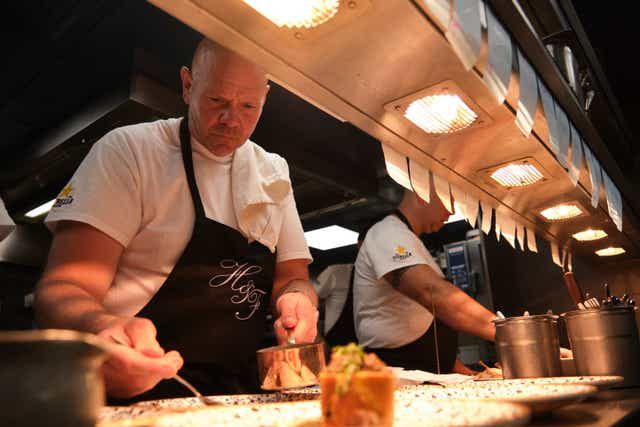 It seems that for Kerridge there is a sense that by extending free school meals, the Government will be righting one wrong that’s part of a far larger crisis. “We talk about tax cuts, we talk about austerity and we talk about the problems that the Budgets are facing. Listen, the people these things affect are already the most vulnerable,” he says. “I mean, the fact that we have more food banks in this country than we do McDonald’s is a terrifying thought.” There’s a final shake of the head. “The reality is, we really should be looking at how money is spent, and ways money could be spent better. We’re talking here about a school meal. They’re making them anyway.
“We’ve got staff that are horrified and heartbroken at having to turn kids away because they don’t qualify. It’s distressing. It’s worrying. How have we got ourselves into this position?”