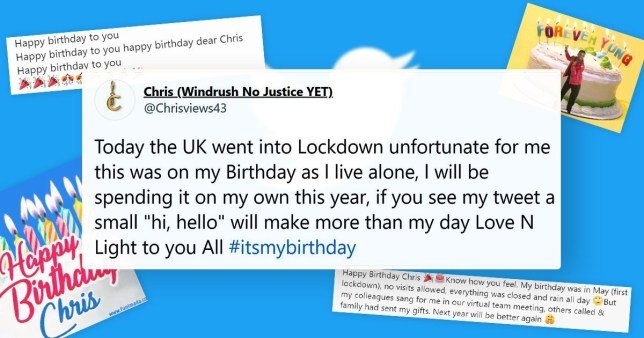 For many people who live by themselves, lockdown can be a very lonely experience that takes a toll on their mental health.

Recent research has suggested men have fared particularly badly since the pandemic, with 42% claiming their mental wellbeing had been negatively impacted by limited social contact.

People are in need of love and support more than ever, as England entered its second national lockdown today, banning trips outside the home other than for a specific set of exceptions.

When a Londoner named Chris announced on Twitter he’d be spending his birthday alone this year due to the news, thousands of kind hearted strangers rallied around him and send their best wishes.

One woman even offered to order him a takeaway as a birthday treat, but he asked for her to donate to a mental health charity instead.

In a tweet this morning, Chris said: ‘Today the UK [England] went into lockdown unfortunate for me this was on my birthday as l live alone.

Hey Chris. Sorry that it ended up this way. Wish I could do more but would you be okay with a virtual homemade Birthday Minion Cake? 🎉🎉 pic.twitter.com/ujopVnD4Mc

happy birthday!! here’s some photos of my dogs. they are all very badly behaved but i think photos of dogs can cheer anyone up :) pic.twitter.com/slbtNRbtC1

its been amazing with the love sent, They have made my year, https://t.co/Alrz65L2Up

‘l will be spending it on my own this year, if you see my tweet a small “hi, hello” will make more than my day Love N Light to you All #itsmybirthday.’

Chris, a victim of the Windrush immigration scandal, was flooded with lovely messages and plenty of pictures of people’s pet cats and dogs.

‘Happy Birthday Chris’ was even listed as trending on Twitter, as more than 6,000 people replied to his post.

When one person offered to buy Chris a takeaway, he replied: ‘You have literally bought tears to my eyes and l am so grateful, you have made my day with all the love on here.

‘You have treated me making such a beautiful offer. If you still want to treat me then it would be a beautiful gift if you donated 2 charity 4 people with mental health.’

Janine is an angel, This is the best gift you could of given me, your Donation has done more than make my day, to think there are angels like you in this world gives us the strength and light we need when times are dark, you are amazing all my love to you. https://t.co/2Js4OYkBV0

Happy Birthday Chris - sending best wishes to you and to anyone else on their own during the lockdown ♥️ https://t.co/7Qi38yuemV

No problem at all. The world might be falling apart but the kindness of strangers will never stop. I really believe that.

Sure I will happily make a donation to a mental health charity. Fantastic idea.

Lockdown birthdays can feel pretty lonely, but do something self indulgent and enjoy not sharing the cake 🎂🎂🎉🍾 pic.twitter.com/5qR6MBwMBV

Blown away by the support he received, he added: ‘A massive thank you to everyone who wished me happy birthday, you have shown so much love its made more than my day, I will be smiling all year you guys are brilliant and have big hearts lots of love to you all, you really made an old man happy.’

On Tuesday Chris revealed that he was a victim of the Windrush immigration scandal, which saw thousands of Commonwealth immigrants who moved to Britain in the decades following the Second World war, wrongly denied their rights.

Many people of the Windrush generation arrived as children on their parents’ passports and never got one for themselves.

In 2010 the Home Office destroyed thousands of landing cards and other records, leading to many people being falsely accused of being illegal immigrants with no documentation to defend themselves.

Sharing his story on Twitter, Chris said: ‘I am also a #Windrush victim, tried to get employment after leaving my job in 2009 and was unable to work due to government legislation and policies.

‘Applied for compensation July 2019 was made an offer in October 2020, The offer was an extremely low offer for loss of ten years.

‘Ten years of my live was lost and ruined due to the home office legislation and they felt that the offer compensated for irreversible damage caused over ten years.

‘We have been overlooked by the scheme and this is wrong, We lost everything due to a legislation.’