In the last five years, the western US state has experienced the largest and most destructive fires in its history.

Thousands of people remained under evacuation orders on Saturday after a wind-whipped wildfire raged through rural northern California, injuring people and torching an unknown number of homes.

The fire that began Friday near a wood products plant quickly blew into a neighbourhood on the northern edge of Weed but then carried the flames away from the city of about 2,600 people.

Evacuees described heavy smoke and chunks of ash raining down.

Annie Peterson said she was sitting on the porch of her home near Roseburg Forest Products, which manufactures wood veneers, when “all of a sudden we heard a big boom and all that smoke was just rolling over toward us”.

Very quickly her home and about a dozen others were on fire. She said members of her church helped evacuate her and her son, who is immobile. She said the scene of smoke and flames looked like “the world was coming to an end”.

Allison Hendrickson, spokeswoman for Dignity Health North State hospitals, said two people were brought to Mercy Medical Center Mount Shasta. One was in stable condition and the other was transferred to UC Davis Medical Center, which has a burns unit.

Rebecca Taylor, communications director for Roseburg Forest Products based in Springfield, Oregon, said it is unclear if the fire started near or on company property.

A large empty building at the edge of company property burned, she said. All employees were evacuated and none have reported injuries. 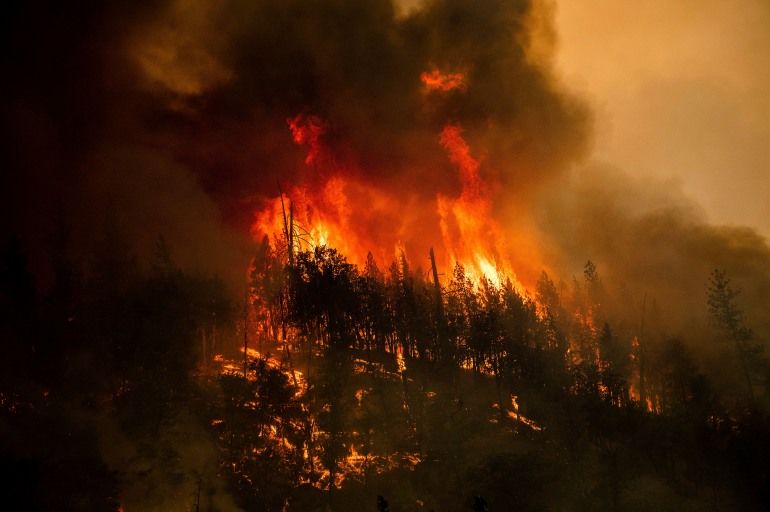 The flames raced through tinder-dry grass, brush and timber. About 7,500 people around Weed and several nearby communities were under evacuation orders.

Deborah Higer, medical director at the Shasta View Nursing Center, said all 23 patients at the facility were evacuated, with 20 going to local hospitals and three staying at her own home, where hospital beds were set up.

Governor Gavin Newsom declared a state of emergency for Siskiyou County and said a federal grant had been received “to help ensure the availability of vital resources to suppress the fire”.

It was the third large wildfire in as many days in California, which has been in the grip of a prolonged drought and is now sweltering under a heatwave that was expected to push temperatures past the 100F mark (38C) in many areas through Labor Day.

Thousands also were ordered to flee on Wednesday from a fire in Castaic, north of Los Angeles, and a blaze in eastern San Diego county, near the Mexican border, where two people were severely burned and several homes were destroyed. Those blazes were 56 percent and 65 percent contained, respectively, and all evacuations had been lifted.

The heat taxed the state’s power grid as people tried to stay cool. For a fourth day, residents were asked to conserve power on Saturday during late afternoon and evening hours.

The Mill fire was burning about an hour’s drive from the Oregon state line.

The whole region has faced repeated devastating wildfires in recent years. The Mill fire was only about 30 miles (48km) southeast of where the McKinney fire – the state’s deadliest of the year – erupted in late July. It killed four people and destroyed dozens of homes. 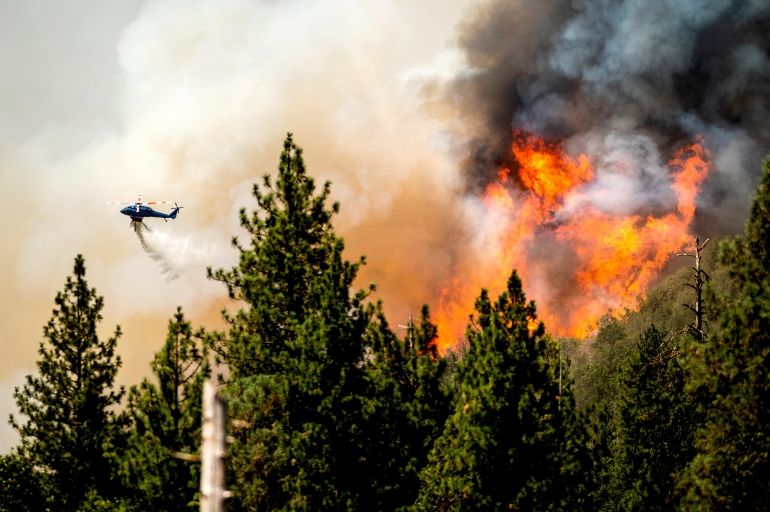 A helicopter drops water while battling the Oak fire in Mariposa county, California

Olga Hood fled her Weed home on Friday as smoke was blowing over the next hill.

With the notorious gusts that tear through the town at the base of Mount Shasta, she didn’t wait for an evacuation order. She packed up her documents, medication and little else, said her granddaughter, Cynthia Jones.

“With the wind in Weed everything like that moves quickly. It’s bad,” Jones said by phone from her home in Medford, Oregon.

Hood’s home of nearly three decades was spared from a blaze last year and from the devastating Boles fire that tore through town eight years ago, destroying more than 160 buildings, mostly homes.

Scientists say climate change has made the western United States warmer and drier over the last three decades and will continue to make weather more extreme and wildfires more frequent and destructive.

In the last five years, California has experienced the largest and most destructive fires in state history.