The mayor of Chicago, Lori Lightfoot, has vowed to welcome immigrants bussed to the city from the Mexican border, as the hard-right governor of Texas opened a third front in his confrontation with the Biden administration and Democratic sanctuary cities.

Lightfoot delivered a defiant speech on Thursday in which she accused Governor Greg Abbott of cruelty and racism, and pledged to respond to the Texan’s controversial scheme by greeting the released migrants with open arms.

Chicago received its first busloads of 79 migrants, in this case Venezuelans, on Wednesday night.

They were dispatched by Abbott, who has already sent about 9,000 people who crossed the US-Mexico border without documents giving them entry to the US to Washington DC and New York City.

The move is a point-scoring stunt designed to level blame for chaotic conditions on the southern border at the White House and Democratic-controlled cities.

The Republican governor of Arizona, Doug Ducey, is pursuing a similar ruse albeit on a smaller scale.

At a press conference, Lightfoot said she could not “fully make up for the cruelty that our new neighbours have experienced”. But she said: “We have and we will continue to welcome them with open arms. I refuse to turn our back on them at a time when they need support the most.”

She said that in opening up a new Chicago front, Abbott had shown himself to be a “cheap politician” and “a man without any morals, humanity or shame”. The migrants he was loading on to buses and carting across a strange country were “moms and dads, young children, elders who deserve our respect and dignity. They’re not cargo. They are not chattel. They are human beings.”

Among the 75 arrivals to Chicago were seven infants, and a total of 20 children and teens, according to local authorities. They were met at the bus with an offering of food, clothes, a shower and shelter.

Chicago is now bracing itself for the arrival of further busloads of migrants after the city became the third target of Abbott’s political gambit.

It began in April when he initially targeted the nation’s capital, forcing Washington officials to scramble for ways to house the asylum seekers.

The move was immediately controversial, inviting criticism even from fellow Republicans – some within the Texas assembly. The bussing was then expanded to New York earlier this month. 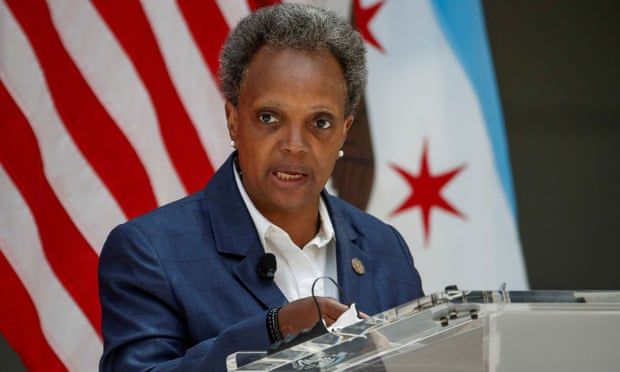 Mayor Lori Lightfoot: ‘I refuse to turn our back on them at a time when they need support the most.’

Abbott has appeared on the conservative Fox News TV network presenting his ploy as a way of exposing the hypocrisy of Democratic leaders in northern “sanctuary cities”.

He appeared on rightwinger Sean Hannity’s Fox News show at the time the New York scheme began and said: “These liberal leaders up in the north-east think, ‘That border crisis created by Joe Biden, that’s fine as long as Texas has to deal with it.’ But as soon as they have to deal with the real consequences of Biden’s border-caused crisis, they are up in arms.”

The Democratic mayor of New York, Eric Adams, has counter-attacked by accusing the Texas governor of inhumanity. Migrants were having to endure bus rides lasting almost two days with restricted breaks and food.

“I think that Governor Abbott, what he’s doing is just so inhumane,” Adams said.

New York’s immigration commissioner, Manuel Castro, this week lamented the bussing as a “rightwing political extremist crisis”. He said Abbott was fomenting “anti-immigrant and anti-Latino hate, which impacts all of us whether we arrived here today or decades ago”.

Under basic US immigration regulations, migrants passing through Mexico and crossing the border into the US who do not have documentation are released from custody after processing. They can move around the country while awaiting court decisions on their asylum applications.

One of the paradoxical aspects of Abbott’s aggressive stance is that it is creating an additional burden on Texas taxpayers. The cost of travelling from the border state to another part of the US normally falls entirely on the migrants themselves, but under the bussing scheme the travel is provided free.

Abbott has said the bus rides are voluntary for migrants, but that is also in dispute. They are often aiming to reach much closer destinations in the south-west, to join relatives, but do not have the money to get there and are offered the rides to northern cities and, apparently without liaison with those cities’ leaders, aid and prospects upon arrival.

CNN used freedom of information powers to extract information from the Texas division of emergency management that showed that it has already spent more than $12m. The money went to Wynne Transportation, which provides the buses.

Migrants arriving in Chicago will not be asked about their immigration status, and their information will not be shared with federal authorities or law enforcement, under city rules. They will be able to apply for a full range of public services.