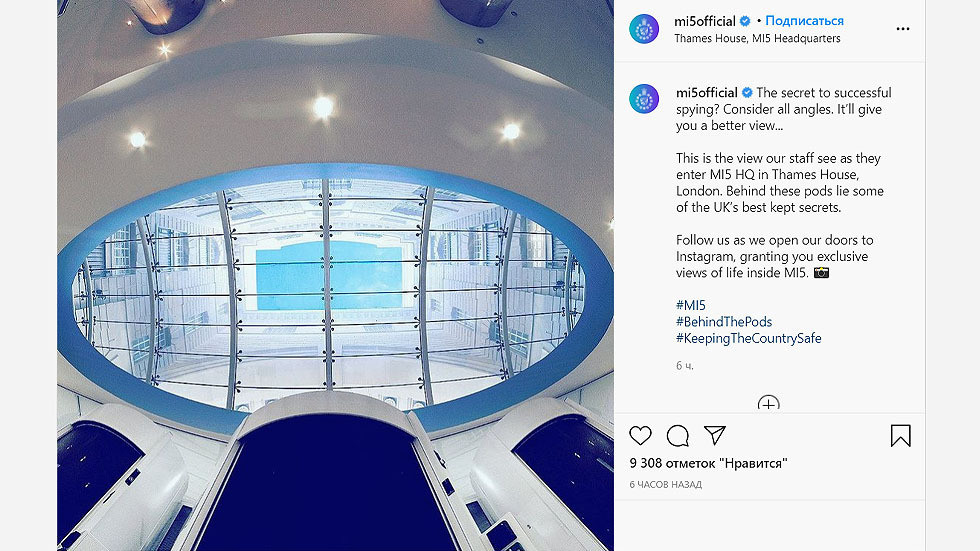 There’s a new influencer in town: Followed by thousands, in service to Her Majesty the Queen… welcome to Instagram, MI5

British spy agency MI5 is now on Instagram, promising to show off the ‘secret of successful spying’ and demonstrate how to ‘consider all angles.’ It has already beaten its sister service, GCHQ, in number of followers.

In just five hours since making its first post, the official MI5 account already has 30,000 people following it. One could see this as a testament to the limelight that the counterintelligence agency gets from the similarly named foreign intelligence organization which employs fictitious super-agent James Bond. MI6 is sadly absent on the network, but GCHQ, Britain’s signal intelligence agency, joined Instagram in October 2018, and has only 24.3k followers so far.

British spooks will have to work hard, however, to compete with their cousins across the pond. Since the CIA joined the network in 2019, it has drawn a cozy audience of 350,000 followers.

The first MI5 post contains a photo from an unusual angle of its London HQ and says that considering unorthodox perspectives is a “secret to successful spying.” It adds: “Follow us as we open our doors to Instagram, granting you exclusive views of life inside MI5.”

Of course, spy agencies are supposedly not on Instagram for the strong following and free skin care products that are awarded to the regular influencer crowd. MI5 Director General Ken McCallum says he wants to helm a more open intelligence organization that is keeping up with “an increasingly open and connected world.”

“We owe it to the public to be constantly striving to learn and improve; and in our fast-moving world, with technology advancing at incredible speed, it would be dangerous vanity to imagine MI5 can build all the capabilities it needs inside its own bubble,” he wrote in the Daily Telegraph, in an article explaining the “belated” Instagram engagement.

The account will allow MI5 to “reach out directly” to the wider public, seeking recruits, external expertise, and “varied perspectives,” and debunking “whatever Martini-drinking stereotypes may be lingering” out there.

People should not disregard the agency as an employer “based on perceived barriers such as socio-economic background, ethnicity, sexuality, gender, disability, or which part of the country they happen to have been born in.”

So there you are: the MI5 is on ‘gram to show its woker side and lure better talent. Hopefully, this drive won’t be as prone to hilarious linguistic blunders as the CIA’s has been, when it comes to Russia. After all, Moscow is a top spy threat for London – or so it has been saying for years.
Add Comment