GPD has shrunk days before the chancellor is expected to address an "eyewatering" gap in the public finances, suggesting there could be worse to come. However, the fact it is unclear what will happen in Ukraine is just one reason why people should hold their judgement.

The UK now officially has one foot in a recession.

That might on the face of it sound like a statement of the obvious. After all, for many households up and down the country it has felt pretty tough for quite some time.

That the Office for National Statistics (ONS) is now saying that gross domestic product (GDP) shrank by 0.2% in the third quarter of the year might feel neither here nor there. And the definition of a recession is also frankly somewhat arbitrary: we will only "formally" be in recession according to that definition if GDP also shrinks in the final three months of the year.

Even so, these numbers are worth paying attention to for a few reasons. The first is that GDP is the most comprehensive measure of how we're all doing. It has plenty of flaws, but as economic numbers go, they don't get much more important. For GDP shows how much money and activity we're generating across the country. And when it falls it means we're all a bit worse off.

And the concern is that pretty much every major forecaster thinks this is just the beginning of it. The Bank of England's forecasts assume a further seven quarters of contraction - though it's worth saying there are some very big provisos around this number. And then when you bear in mind that this all comes before the widely expected cuts and tax rises the chancellor is expected to introduce next week to address what he today called an "eyewatering" gap in the public finances, it's clear there could be worse to come.

That being said, here are a couple of reasons to hold your judgement. The first is that we really have no conception of what is going to happen in Ukraine in the coming months. The energy price shock is not the only factor in the economy right now, but it is a large part of it. If things go better than expected in Ukraine that could help keep energy prices down, which in turn would lessen the cost of living squeeze. But the converse is also true: if things deteriorate then the squeeze could worsen. 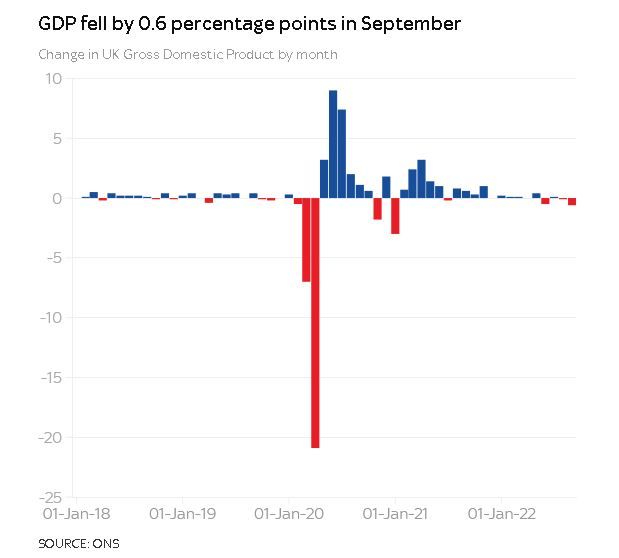 Second, the numbers today were, in one respect at least, a little better than expected. Economists had been pencilling in a 0.5 per cent fall in GDP in the third quarter, so a 0.2 per cent fall is considerably less bad. Moreover a chunk of that deterioration was down to the extra bank holiday due to the Queen's funeral. Adjust for that and the economy was perhaps "only" flatlining. And it's quite possible this fall gets revised in coming months.

That being said, nearly every other economic metric is pointing towards a period of weakness, if not recession, in the coming years. But it's worth being very wary indeed of any forecasts telling you quite how long and quite how deep. We are living in particularly uncertain times.