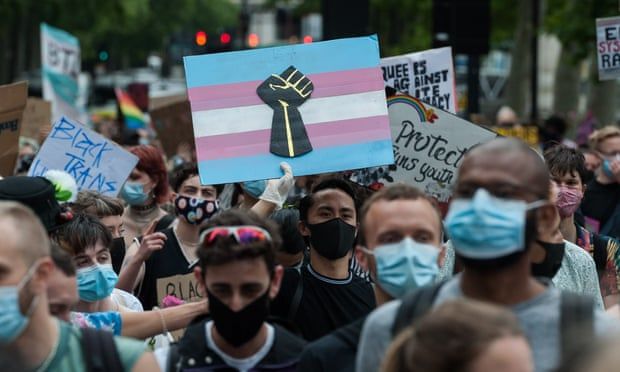 Sadly, blending in for a quiet life remains a necessary survival strategy for far too many people in Britain today, says Guardian columnist Owen Jones

It is impossible to know how much of the surge in reported hate crimes against LGBTQ people is due to escalating harassment and violence, and how much is down to the increased willingness of victims to inform the authorities. What we do know that is that recorded homophobic and transphobic hate crimes have jumped every year since 2015, and yet with an estimated four in five still going unreported, the already grisly figures only hint at a far bleaker reality.

The incidents vary in nature and severity: from abuse hurled at someone identified as LGBTQ because of their appearance, or mannerisms, or a fleeting or profound show of affection towards a partner; to gay men being beaten and robbed, as happened in a suspected homophobic attack on the streets of Edinburgh last month, or a trans man savagely attacked in Bournemouth earlier this year. “According to our research, many experienced verbal harassment, physical abuse, threatening messages, and damage to property,” says Eloise Stonborough of the LGBTQ civil rights organisation Stonewall.

In all cases, there is often a visceral sense of humiliation linked to a sudden invasive reminder that your innate characteristics still drive a section of society to violent disgust. After all the undoubted progress, anti-LGBTQ bigotry remains a kind of secret authoritarian regime in this country. It compels many LGBTQ people to alter their behaviour in order to quietly blend in, or to pretend they are something they are not to relatives, friends and colleagues in order to avoid experiences ranging from the uncomfortable to the outright menacing.

These statistics should not leave a false impression. The experiences of LGBTQ people are not the same. A white, middle-class, gay, cis man – that is, someone generally at one with their gender assigned at birth – in an urban area is likely to suffer far less meaningful oppression than other groups. Beyond the fear of holding hands with their partner in public, their main grievances tend to centre on the psychological scars left by the often suffocatingly homophobic environment of their school years.

This can lead to lasting trauma, which largely explains the higher rates of mental distress and abusive relationships with alcohol and drugs among LGBTQ people. The most damaged are frequently those whose fathers and mothers violated the most sacred principle of parenthood – unconditional love – in deference to their own bigotry, often implanting a ticking time bomb in their children that may detonate in later life, be it in the form of emotional breakdown or drug addiction.

For a young gay black man, homophobia may collide with increased risk of police harassment and racist behaviour from other LGBTQ people: victims can be perpetrators, too, sometimes believing their own mistreatment makes it impossible to oppress others.

Yet as Shon Faye’s brilliant new book The Transgender Issue underlines, it is trans people – the T in the LGBTQ – now suffering the most severe onslaught. It’s said that history doesn’t repeat itself but it often rhymes. Today’s relentless campaign against trans people seems a near-carbon copy of the previously widespread monstering of gay and bisexual people, with all the same tropes repeated: that they are would-be sexual predators, that they seek to brainwash and recruit children, that biology is destiny, that this is a whimsical lifestyle choice, that they are defined by mental illness or a creepy fetish that imposes an intolerable burden on the “normal” majority.

In the 1980s and 1990s, many supposed liberals participated in the anti-gay offensive, lamenting that the case for gay rights was being undermined by “militant homosexuals” making unreasonable demands on the rest of society, such as asking newspapers not to call them “poofters”. Again, history repeats itself. The panic over trans rights has airbrushed the cruel reality facing trans people: the quadrupling of reported transphobic hate crimes; the one in four that have been homeless; the 41% who suffered a hate crime in a 12-month period; the nearly half who feel uncomfortable using public toilets; the quarter discriminated against when looking to rent or buy a home.

This panic has also obscured the threats facing all LGBTQ people. Only last week, police confirmed the identity of Ranjith Kankanamalage, a 50-year-old murdered in a suspected homophobic attack in east London on August 16. This horrific story has been rightly covered by all the papers, but it has been overshadowed in public discourse by the preposterous row over a man who appeared at a LGBTQ rights protest in Manchester wearing a T-shirt and hat with the logo of the LGB Alliance, an organisation whose main purpose appears to be campaigning against trans rights.

This was akin to someone turning up to an anti-Trump protest in a Maga cap, with the same predictable result. After he was met by chants of “Trans lives matter”, police escorted him away from the march. Supporters of the LGB Alliance – many of whom are straight – promptly took to Twitter to denounce this incident as homophobia and even gay-bashing by the queer protesters – some of whom will inevitably have suffered actual hate crimes. The man became something of a cause célèbre, in an incident that has been marshalled to support the increasingly common claim that the trans rights movement is homophobic; a “woke homophobia” as a GB News presenter put it, rendering LGBTQ people the real homophobic bigots.

Yet as reported hate crimes surge, Stonewall – by far the largest LGBTQ civil rights organisation – finds itself targeted by a McCarthyite campaign against its defence of trans rights. Organisations such as Ofcom have been successfully pressured into cutting ties with Stonewall’s diversity scheme. There are no openly trans national politicians, and the British media has been rendered an almost entirely hostile environment for trans people and their LGBTQ allies. Meanwhile, anti-trans activists claim to be “silenced” while enjoying support from the country’s newspapers. While those cruelly hounding trans people may be driven by an undoubted realisation that they will, in time, lose – the polling shows younger people, and women in particular, are most supportive of trans people – that is of little comfort to an extremely besieged minority today.

But as Faye’s book eloquently puts it, the liberation of trans people – and indeed LGBTQ people as a whole – will free everyone. For example, a strengthened welfare state and solved housing crisis would provide a trans person rejected by their family with desperately needed independence; but those benefits would help anyone in need of security. The biggest killer of men under 45 is suicide: freeing them from rigid gender norms, which teach them to believe that opening up about their problems is unmanly or “gay”, will make them more likely to seek support. More than half a century since the partial decriminalisation of homosexuality, LGBTQ people still fear the repercussions of simply being themselves. Oppression rots a society from the inside out.

When true liberation happens, “coming out” as LGBTQ won’t be the stressful ritual known to many with experiences ranging from the good to the tragic. It won’t actually be a thing at all – and everybody else will be much freer, too.
Add Comment