Liz Truss suffered a dramatic fall in ratings among people who voted Conservative at the 2019 general election during August, despite being on course to win the party leadership and become prime minister this week.

The latest polling by Opinium for the Observer shows that whereas 49% of people who voted Tory in 2019 had believed Truss “looks like a prime minister in waiting” at the beginning of August, this had dropped to just 31% by 30 August. 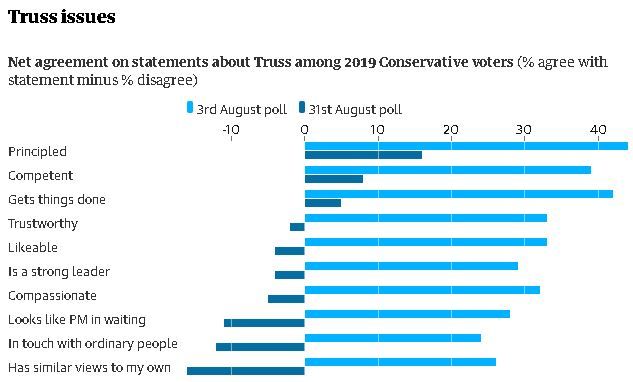 The earlier poll, published on 3 August, came after Truss had two weeks of being talked about as the frontrunner having won her way through to the final runoff among party members, against the former chancellor, Rishi Sunak.

By contrast the later poll came after weeks of alarming stories about energy bills and a lack of clarity from both Truss and Sunak about how they would help people. In the same period the Labour party had published its proposals to freeze energy bills in the autumn, protecting people from 80% increases, which initially helped its poll standing.

While Truss’s ratings on a range of questions had fallen sharply in August, those for Sunak had declined by far less. Remarkably, 35% of 2019 Tory voters said in the later poll – towards the end of the leadership contest – that Sunak “looks like a prime minister in waiting” – while only 31% had that view of Truss.

The poll suggests Truss may have benefited from the fact that many party members cast their votes early in August before the decline in her ratings.

James Crouch of Opinium said: “If Liz Truss becomes prime minister on Monday, this will be because she caught the interest of Conservatives at a pivotal point in the campaign. However, she will arrive in Downing Street with much of that initial enthusiasm on the wane, seen even by Conservatives as out of touch and with unpopular views.”

Overall Labour lead by 4 points on 38% (-1 on a fortnight ago) while the Tories increased their vote share to 34% (+3) compared with mid-August.