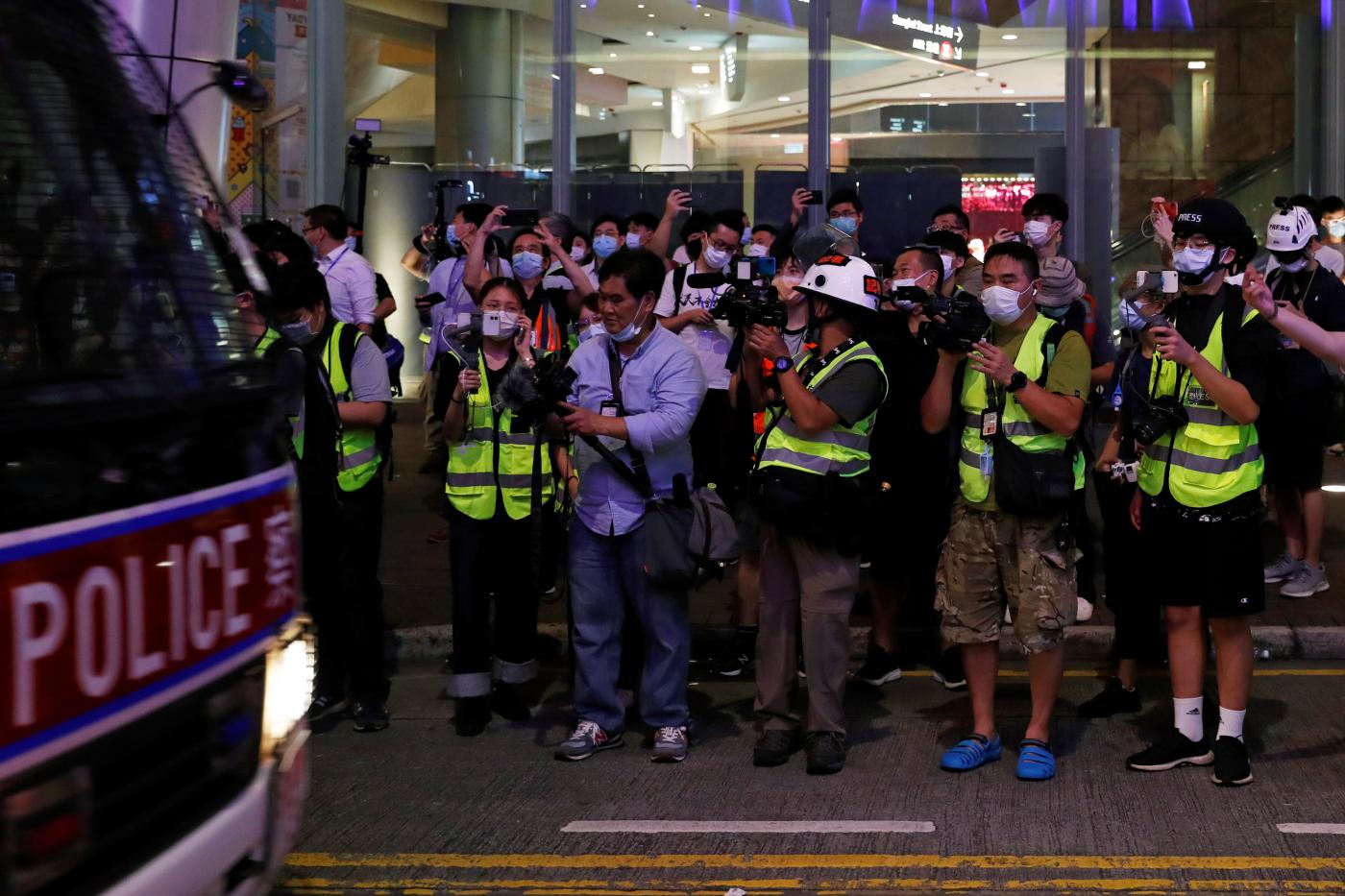 The police have grown increasingly hostile to media, frequently alleging for example that there are many "fake reporters" at protests.

If you can’t solve a problem, redefine it.

That’s the approach the Hong Kong police appear to be taking as they announced today that they will stop recognizing journalist credentials from local media organisations, and define members of the press as only those who have been officially accredited by the government, or who are part of an “internationally recognized and renowned” outlet.

The move is a direct assault on the city’s press freedoms, with troubling and wide-ranging implications. It comes just weeks after a couple hundred police raided the newsroom of Apple Daily and arrested the publication’s outspoken founder, Jimmy Lai. Meanwhile, police have in past months stepped up their accusations, without providing evidence, that there are lots of “fake reporters” at protests.

Police have long pushed for an official government-sanctioned licensing regime for the media. But the overwhelming majority of journalists oppose such a move, warning that it would undermine press freedoms and make Hong Kong’s media environment more in line with that of mainland China, where the state maintains strict controls of who is allowed to work as a member of the press.

Now, to get around opposition to official accreditation, the police will implement a de facto media screening mechanism, and in doing so, redefine what the press is altogether.

In the US, police have also been criticized for restrictive press credentials systems that leave independent journalists and small publications especially vulnerable. While a press pass is not required for journalistic work, a reporter may need one to cover certain events, such as White House briefings or protests after curfews.

Under current Hong Kong police regulations, members of the press are defined as those with press identification issued by news outlets, or have membership cards issued by Hong Kong Journalists’ Association or the Hong Kong Press Photographers Association.

It also means that journalists who are not recognized under the new rules—freelancers and student reporters in particular—risk being charged with offences like unlawful assembly and rioting, or even crimes like terrorism and subversion under the national security law, when out reporting on a protest.

The police did not immediately respond to a request for comment. In a joint statement (link in Chinese), eight journalist organizations in Hong Kong decried the new policy as “seriously affecting reporting and press freedoms” which will hasten Hong Kong’s move toward totalitarian rule.

Hong Kong’s protests last year were some of the most live-streamed ever, thanks in large part to a vibrant local press corps that sent out legions of reporters to document demonstrations for hours on end.

Local student journalism outfits also captured some of the protests’ most dramatic moments, such as when the first protester was shot by police with a live round last October.

Throughout the height of last year’s protests, reporters were generally able to document frontline action, but in past months police have been increasingly liberal in their use of cordon lines, carving off large sections of city streets to distance journalists from protesters.

In one notorious incident in May, police kettled dozens of reporters, detained them, ordered them to turn off cameras, and pepper-sprayed them. The police commissioner later apologized.
Add Comment