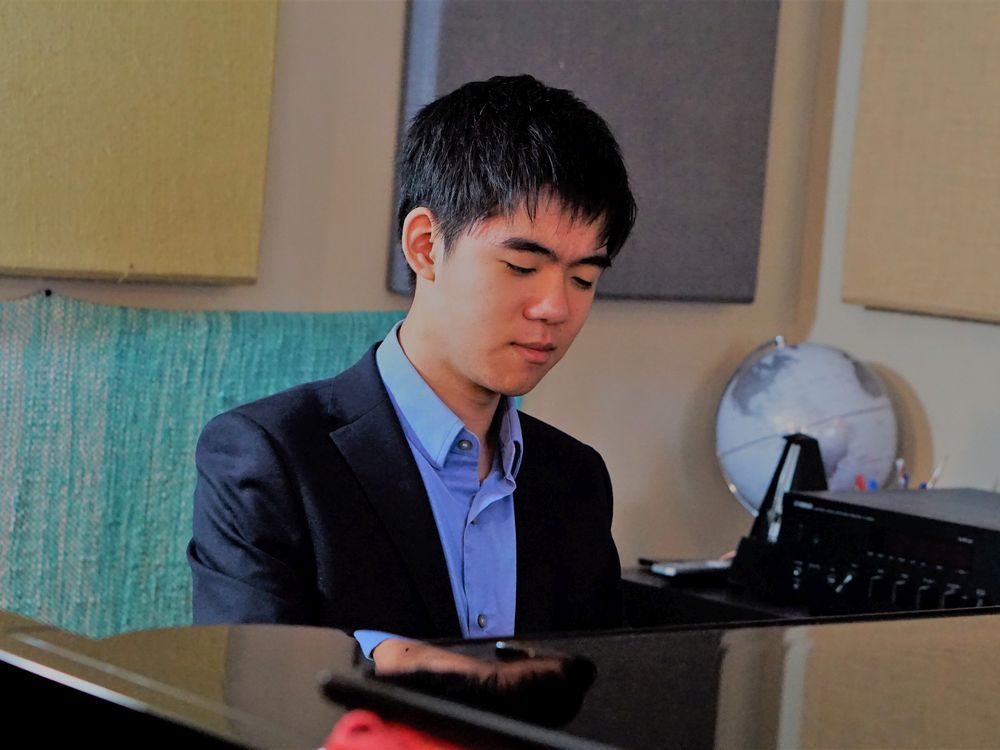 The future is bright, if undecided, for piano prodigy Kevin Chen

Call it the storm before the calm.

In those minutes and seconds before 16-year-old classical pianist Kevin Chen is set to perform or compete, he is usually distracted by an epic battle with his nerves.

“Before I go on stage is the most nerve-racking part,” says Chen, in an interview from his Calgary home. “Just waiting in the room while they are announcing me, I get super nervous. But once I go on stage, I don’t think about it anymore. I just sit down and play and all of it just goes away.”

Chen presumably entered that zone last weekend in Budapest, when he became the youngest musician in history to win the prestigious Frank Liszt International Competition. Given the technical difficulty of performing Liszt’s compositions, Chen’s ability to block out distractions while on stage was probably helpful. Whatever the case, he wowed the audience and the judges last weekend, besting 22 competitors from around the world.

It was just the latest triumph for the musician and composer, who has been winning competitions and earning attention since he was seven years old. That was when he was awarded a top prize at the Canadian Music Competition in the seven-year-old category. The CBC named him among the “Top 30 Hot Canadian Classical Musicians Under 30” in 2013 when he was 10. In 2019, he took home the win at the e-Piano Junior Competition, an international event held in Minneapolis for classical pianists aged 17 and under.

But the win in Budapest seems to put him at a crossroads and has him poised to emerge from the realm of child prodigy and into a much larger classical music world.

Marilyn Engle, Chen’s piano teacher and a professor at the University of Calgary, says he began to shine in international competitions in 2013 although, until now, most of them were geared toward younger musicians.

“These are major competitions for people under 18,” says Engle, who has taught Chen for nearly four years. “He just started to flourish. This was the first one, though, that was open to adults. Up to (the age of) 32 with no lower age limits. I thought: Well, that’s an interesting entree. Let’s try that.” 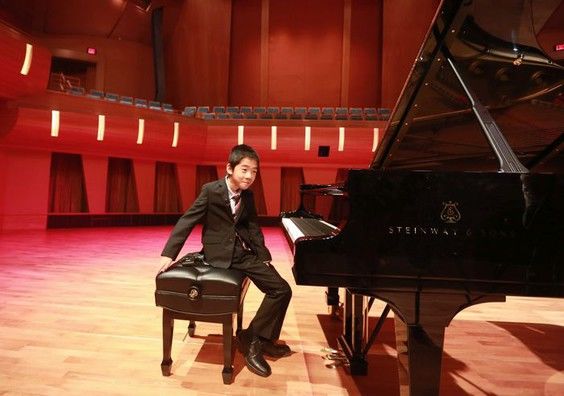 Piano prodigy Kevin Chen at the age of 10, smiles after rehearsing in the Mount Royal University’s new Bella Concert Hall.

Still, if Chen is at a crossroads, he hasn’t made any major life decisions about his future in the world of classical music. At least not any that he is willing to share with the press. Soft-spoken and laconic in conversation, Chen doesn’t reveal too many details about his near future. After returning home from his 12-day adventure in Budapest, the Grade 11 Dr. E.P. Scarlett High School student is currently busy caching up on his schoolwork. He spends three hours a day practising piano, something he views as fairly modest compared to others. His win in Budapest will lead to performing engagements in that city, including one in February. He says he is currently looking into schools in Canada, the United States and Europe for future musical study although says it’s too early to reveal which ones. At 16, he says he has decided that music will be his future, but he hasn’t decided on what that will exactly entail. Does he see himself as more of a composer or a concert pianist? Does he want to teach?

“There are a lot of possibilities,” he says. “I’m not too sure yet.”

For Engle, it goes without saying that Chen’s future is bright no matter what he decides. The win in Hungary has certainly boosted his profile.

“He just created a sensation in Budapest and online,” she says. “People were astonished as they should have been.” 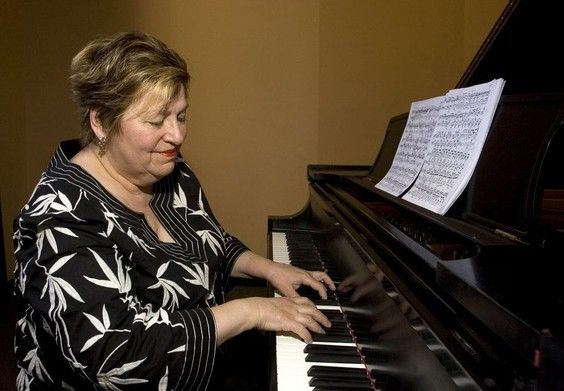 Marilyn Engle preparing for a recital at Rozsa Centre in 2010. Engle says Calgary has a rich history of producing classical musicians.

Engle, herself a prodigy who studied at the Juilliard School in New York in the 1960s, also taught Jan Lisiecki briefly when the Calgary-born classical pianist was a teenager. Now 26, Lisiecki has been the toast of the classical music world for more than a decade. He plays more than 100 shows a year around the world and has released a number of albums with Deutsche Grammophon that have him interpreting the work of Mozart, Mendelssohn, Beethoven and Chopin, including this year’s Frederic Chopin: Complete Nocturnes. So it may be tempting to lump Lisiecki and Chen together as Calgary’s best-known child prodigies.

But Engle says their career arcs have been and will likely continue to be different. By the time Lisiecki was 15, he had already been dubbed “the aristocrat of the piano” by the press and maintained a hectic schedule of international concerts. The CBC had already done a documentary on him. He had played Carnegie Hall. On his 15th birthday, newspapers listed him alongside blogger Perez Hilton and Princess Eugenie of York among March 23’s celebrity birthdays. A mix of astute management by his parents, savvy promotion, astonishing talent and his natural charisma had already secured him a place in the world of classical music by that point, even if he hadn’t completely decided yet if he would dedicate his life to it.

Chen, on the other hand, has tended to focus more on competitions than establishing a career on the concert circuit.

Engle says Chen and his family might not be as “up on all of the possibilities, perhaps. But they are certainly there in terms of the talent.”

One thing the two musicians have shared, however, is a dislike of descriptions that focus on age. Now pushing 30, there is less focus put on Lisiecki’s age, although a recent profile in the New York Times did refer to him as “Piano’s Doogie Howser.” He has made no secret of his disdain for the term “child prodigy.”

Chen is not a fan either.

“I don’t like it, necessarily,” he says. “But, I guess, sometimes that’s what you have to do.”

Like Lisiecki, Chen’s youthful achievements have been dutifully chronicled by the local press. At the age of seven, a 2012 article in the Calgary Herald proclaimed him “the most exceptional of the lot” in the city’s rich history of formidably talented young musicians that included Wesley Chu, Stephen Nguyen and Lisiecki. Much was made of Chen’s youthful output as a composer, as well. A 2014 profile in Maclean’s reported that the 10-year-old musician had written three symphonies and 80 other compositions for piano and violin by the age of 10.

He even has a cute origin story about his early, precocious embrace of the piano that has been repeated more than once in the press. Before he was three, he would play and compose on a toy piano, expertly banging out simple songs for the family. He doesn’t actually remember this. Nor does he remember his first experiences on a real piano at the age of five. He doesn’t really remember an epiphany moment of discovering Liszt’s music, either. But he says it has been hugely influential on his original work, which has evolved since his efforts as a 10-year-old composer.

“My composing style is probably different now,” he says. “But it’s still nice to look back on that.”

As for Calgary’s reputation for producing precociously talented pianists, Engle says the city has always been a hotspot for classical music and musical instruction. It boasts the Honens International Piano Competition and no shortage of gifted instructors from the University of Calgary and Mount Royal University as part of its infrastructure. There is a pass-the-baton continuum in the city that stretches back to the early 1900s and, specifically, to former child prodigy Gladys McKelvie Egbert. She had a “tremendous influence on the musical life of Calgary,” Engle says. A slew of notable students came through her Calgary studio and she trained a number of the city’s future music teachers. That includes Engle herself, who became Egbert’s student in the 1950s at the age of six until she left Calgary to study at Juilliard.

Still, child prodigies are obviously rare. Those like Chen perhaps even more so. As with a lot of extraordinarily talented young musicians, Engle says Chen’s gifts go far beyond the technical skills required to master Listz and other staples of the classical music canon.

“We have a lot of time together,” she says. “It’s usually twice a week and several hours at a time. But we’re also learning about lots of things: art, literature, life. Because I think they all pertain and I don’t think music is separate at all and I don’t think Kevin does either. I think that’s one of the reasons he has been so successful with his playing. People can hear it, they can feel it when he is playing; that it’s life he is expressing, not just something separate. You have to have some way of expressing life and if you do that it doesn’t matter whether you are an expert or a music-loving audience member, you’ll get it. That’s what he did in Budapest.”