Eaten right off the coals, yaki-imo (roasted sweet potatoes) are a beloved centuries-old food, whether they're served by old-fashioned street vendors or modern "imo" girls and boys.

"Yaki-imo…" The forlorn cry of the roasted sweet potato vendor echoed through the canyons of concrete and tiled buildings in a Tokyo suburb. The pre-recorded song, bookended with spoken claims of "oishii, oishii" (delicious, delicious), flowed from speakers on a stubby flatbed kei truck. This small vehicle, a ubiquitous part of working-class Japan, had been converted into a vessel for idōhanbai (literally, mobile sales).

Complete with an oven and an awning, plus a price list and colourful advertising, the truck trundled slowly around the perimeter of a park on a chilly March evening. It paused outside an apartment block, engine idling. A mother and child stopped, and, after a brief exchange with the vendor, they sauntered off with warm sweet potatoes in hand. The truck lingered a moment longer and then slowly drove on. The song, its rising and falling intonation like a lament, started up again: yaki-imo…

In a country better known for its sushi, sashimi and noodle dishes, the simple roasted sweet potato – or yaki-imo – doesn't garner as much attention. But this hearty vegetable, yet another import in a sizeable list of historical introductions to the island nation (ramen, for example), has long been a beloved winter snack eaten in the cold months after its harvest. A favourite in Japan since the 1600s, yaki-imo's moist, chewy texture and burnt-caramel scent still inspire nostalgia – as do the trucks that are gradually disappearing as sweet potato sales move to convenience stores and supermarkets.

"It is quite a rare treat to hear the song of those travelling peddlers," said Aiko Tanaka, food researcher and director of the Japan Food Studies College in Osaka.

Indeed, not only are fewer kei trucks out there, but you may not even hear them coming. "The biggest factor behind the decrease in the song is noise complaints," said one vendor, Kōki Ono, who has been selling sweet potatoes for almost two years. "Plus, hiki-uri sales [those from mobile peddlers in general] are also declining." 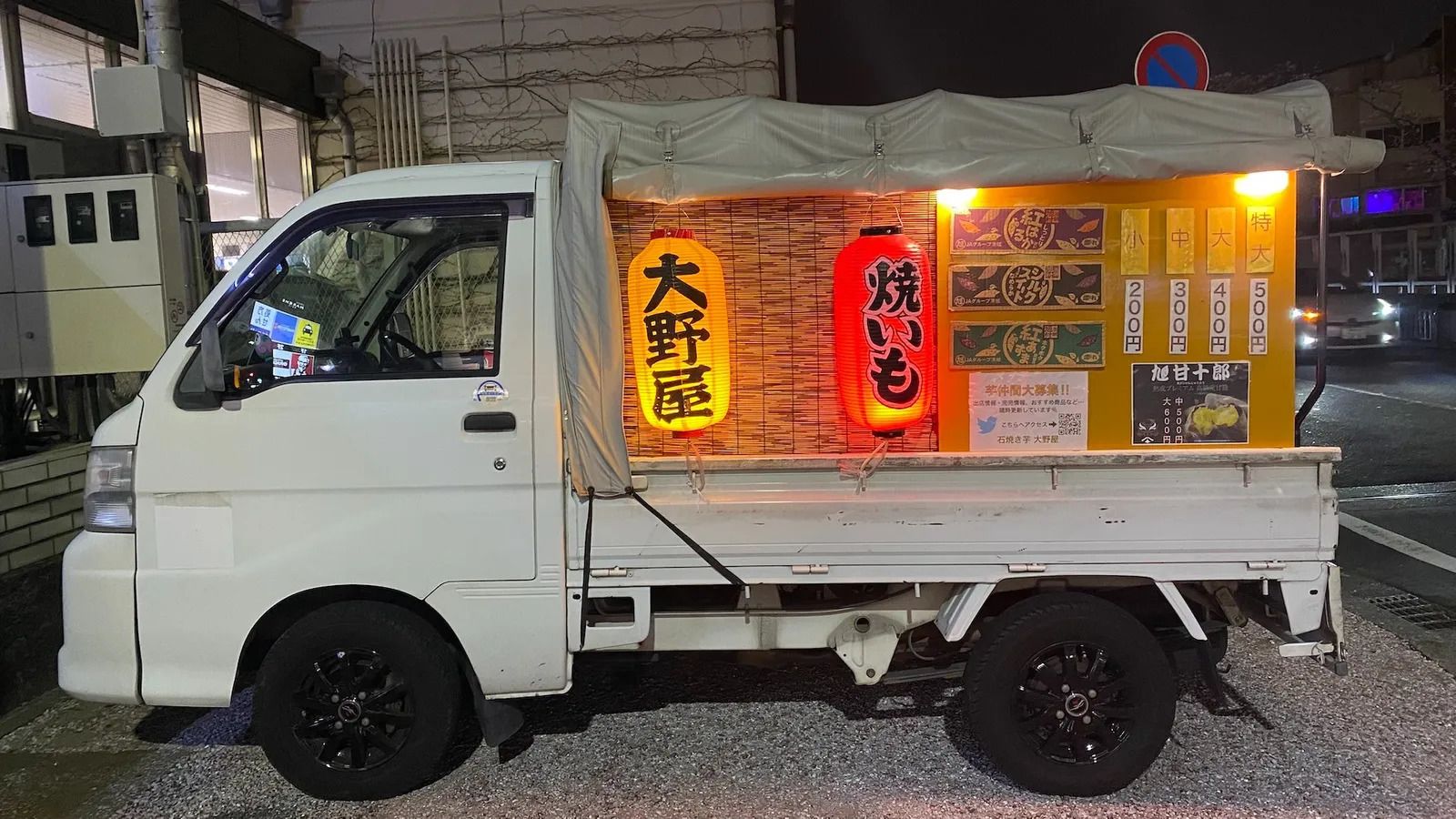 Asuri Kamatani, president of modern yaki-imo outlet Himitsu na Yakiimo (Secret Roasted Sweet Potato), has noticed the same thing. "Certainly, compared to the Showa era [1926-89], the ojisan [uncle] with his roasted sweet potato truck is rarely seen," she said. "It's not an easy profession because it requires physical strength and time. So, it's a tough job for older people."

Those who still trundle along have had to adapt. Ono's truck, Oono-ya, haunts busy spots along the Odakyu Line, a railway route that stretches from Shinjuku to the south-west suburbs of Tokyo, and the Nambu Line that serves Tokyo's Ota Ward and parts of neighbouring Kawasaki. "The simple style of yaki-imo hasn't changed much," he said, the signage on his truck revealing that the potatoes only come in small, medium, large or oversized, with no condiments. One thing he has changed, though, is his strategy: emblazoned on Ono's truck is a Twitter bird and a QR code, anachronistic additions to an otherwise retro sales method and snack.

Sweet potatoes originated in Central and South America, and scholars have some theories that they came to Japan in approximately the 17th Century. "The earliest historical reference to sweet potato in Japan seems to be in the diary of Richard Cocks in 1615," said Eric Rath, professor of Japanese history at University of Kansas and author of Japan's Cuisines: Food, Place and Identity. Cocks, the director of the British East India Company's outpost in Hirado, wrote that he'd received the potatoes from honorary samurai William Adams, recorded as the first English person in Japan.

Rath said there's some evidence they might have already been available in the Ryukyu Kingdom (today's Okinawa) as early as 1605, via the Philippines and then China. Another account holds that in 1611, Ryukyuan King Sho Nei sent a gift of sweet potatoes to Satsuma Domain, a powerful political entity in southern Kyushu, which had invaded his kingdom and taken over his land – one result of which is that the orange tubers sometimes still bear the name satsuma-imo (potato from Satsuma).

Regardless of their path to get there, over time, roasted sweet potatoes proved very popular in Japan. Stalls were set up at the main guard buildings in post towns along important highways, and their sweetness and aroma – and their affordability – caught on. Signs at stalls sometimes advertised them as "kuri-yori-umai" (better than chestnuts). "In Tokyo, many ate them mixed with okayu (porridge made of rice and barley)," Rath said. 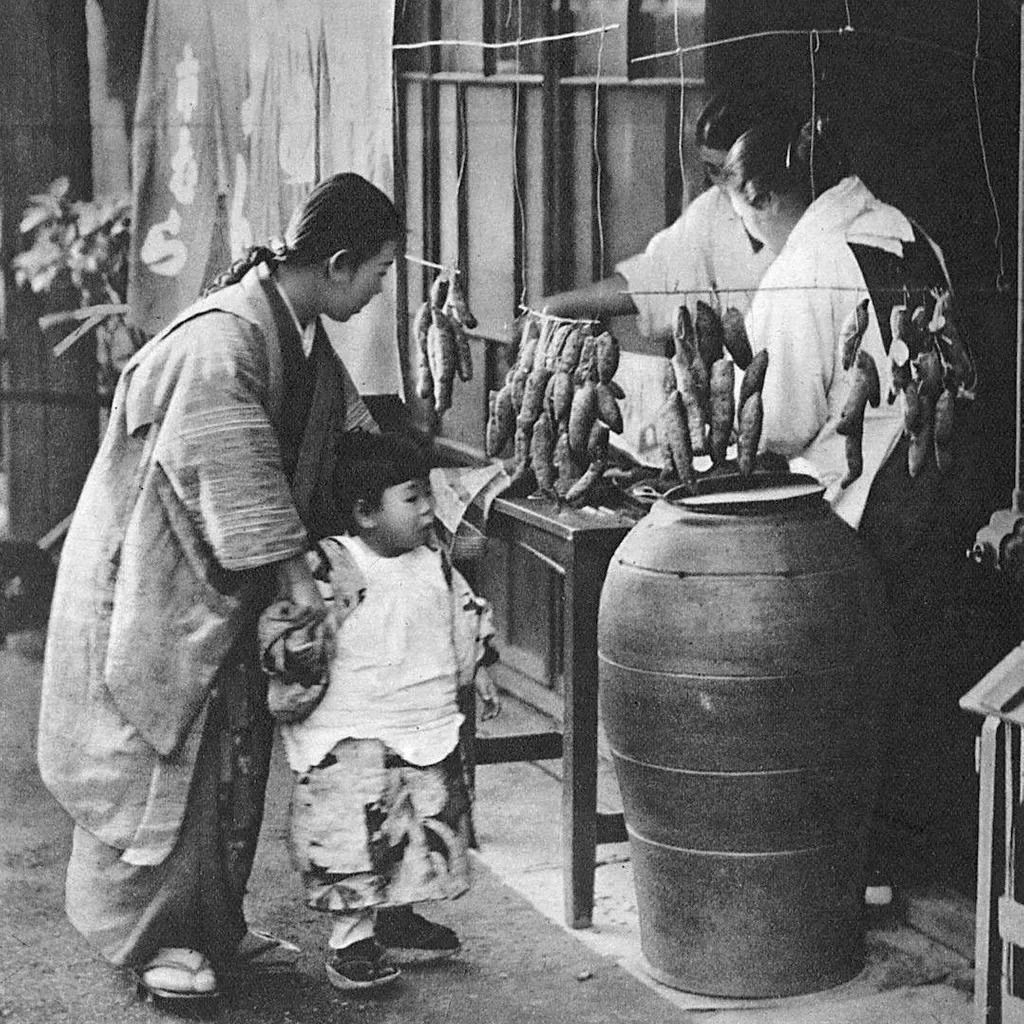 The snack became so well-loved that on 8 May 1891, Tokyo newspaper Yomiuri Shimbun called them "the kasutera [Portuguese-inspired sponge cake] for students and the yōkan [a hard, jelly-like sweet made from red beans] for alley society." The insinuation was that cooked sweet potatoes were a worthy, cheap alternative to otherwise refined sweet treats available at the time. As the century turned, students started influencing the way sweet potatoes were prepared. Daigaku-imo (university sweet potatoes) were wedges slathered in molasses, so named because they were originally sold and eaten in Kanda, near Tokyo University. "By 1905, there were 1,300 yaki-imo places in Tokyo," Rath said.

As yaki-imo became a staple winter food for low-income areas, sweet potato specialty stores and vendors boomed in the early 20th Century. But in 1942, the wartime Staple Food Control Act rationed the sale of various foods, including rice and sweet potatoes, and many sweet potato shops were closed. Nevertheless, they became a key staple during World War Two, when crops like wheat and barley were even scarcer. "Sweet potato flour was used as a substitute for wheat flour," Rath explained. "From 1944, public lands were converted into potato patches, and sweet potatoes would replace the meagre rice allotments in public rations by 1945."

Following a post-war revision to the Staple Food Control Act, which released sweet potatoes from government regulation, vendors returned to the streets. They soon started to use a small oven fitted directly onto the back of the kei trucks, and these peaked in popularity over the next couple of decades.

"Yaki-imo served as a kind of fast food for the common people until around 1970, when American-style snack foods and fast-food restaurants began to appear in Japan," Tanaka said.

Ono's success, however, is proof that the classic food still has a following. "It is a tradition of autumn and winter in Japan," he said, adding that his sales average around 100 yaki-imo per day, and his customer base stretches from seven to 90 years old.

Ono credited the continued popularity of roasted sweet potatoes not only to their longstanding heritage, but also to the fact that they're a healthy, unadulterated and comforting fast food – particularly in the midst of the pandemic. "Since people have been spending more time at home, the focus has very much been on easy-to-purchase health foods, and many customers have visited the truck," he said. 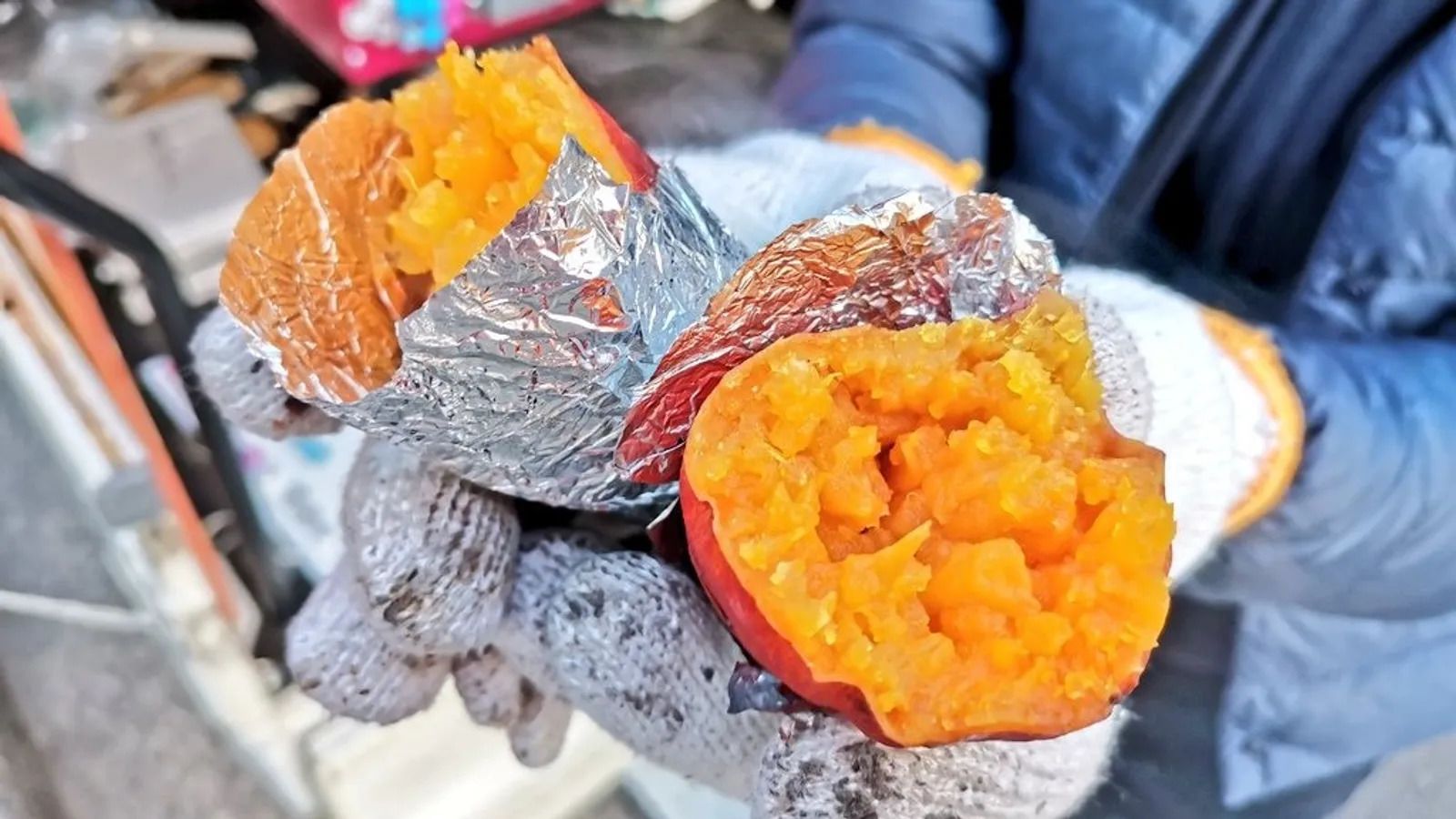 Kamatani has found success too, but by going a different way. For her, she felt that the snack's old-school image needed to change. "Young women like sweet potatoes, but they have this image as 'old-fashioned' or 'lame', and people think 'I want to eat them, but they're embarrassing to buy'," she said.

To subvert that reputation, she focused on onkochishin – an idiom meaning "learning new ideas from the past" – and started her venture with a stylish, tricked-out, pink VW campervan in 2018. Fast-forward to 2021, and her business has moved into a permanent (and still pink) storefront in the fashionable Omotesando district of Tokyo. "All of the sales staff, the imo [potato] girls and imo boys, are influencers," she explained. "They're cool, fashionable young men and women."

Despite Kamitani's modern approach, she recognised the allure of those old-school vendors. "I don't think [they] will disappear," she said. "Because they are 'rare', there are some customers who are fascinated by that sense of rarity and want to buy from them, so there is a certain demand."

For those willing, starting a yaki-imo truck is relatively easy. Unlike other gastronomic enterprises in Japan, no food licence is needed – only a permit to sell from the truck. There's even a company called Yaki-imo Kobo (Yaki-imo Workshop) that provides information for potential vendors and sells everything they'll need to set up a mobile shop – including cassette tapes of the yaki-imo song.

"I think there's a growing appreciation and nostalgia for food vendors that will allow them to continue," Rath said. "The yaki-imo seller is one of the harbingers of the seasons... It's hard to imagine an urban landscape without them."

For Tanaka, the secret is simplicity: roasted sweet potatoes are naturally sweet and can be eaten straight off the coals. It's nutritious, filling and "a great snack alternative to junk food", she said. "Yaki-imo is and always will be a heart-warming treat that holds many fond memories.