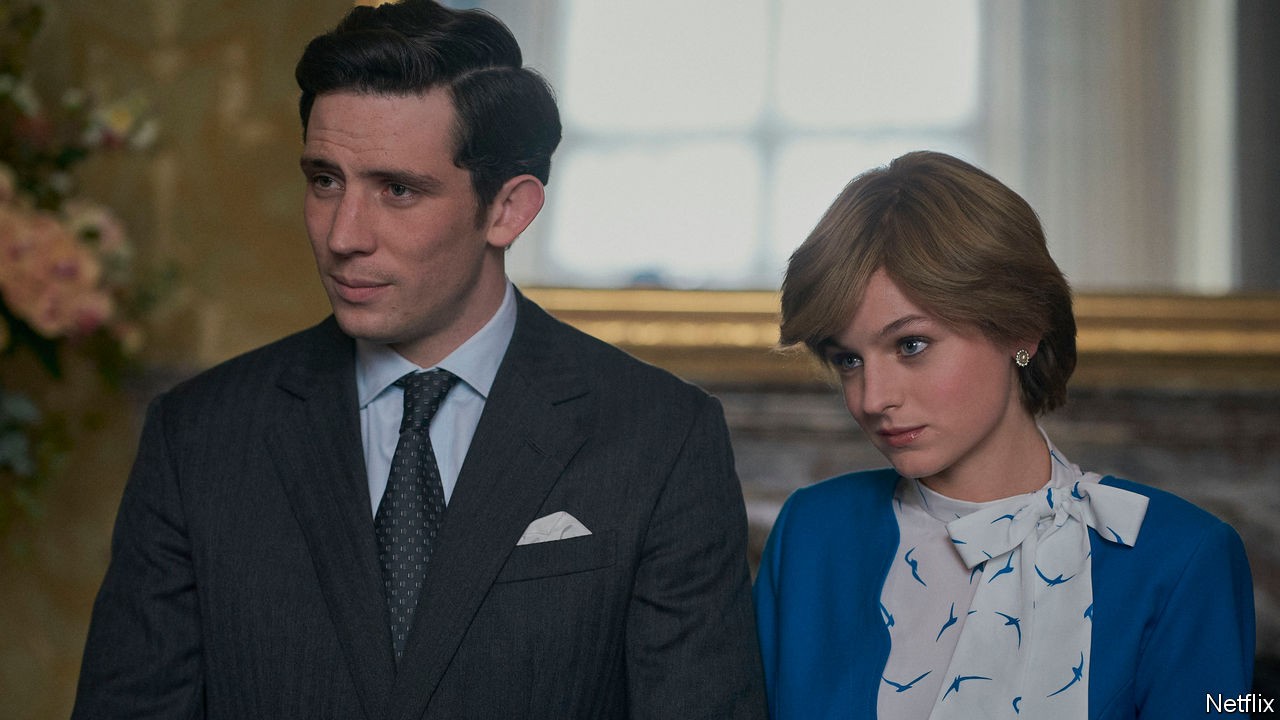 SHORTLY AFTER the release of the first season of “The Crown”—Netflix’s decadent drama about the British monarchy during the reign of Queen Elizabeth II-various publications gleefully reported that the queen herself was a fan, having been encouraged to indulge in an episode or two by Prince Edward, her youngest son.

Though the royals have refused to be drawn publically on the matter, journalists enjoy speculating on what the Windsors might make of their onscreen counterparts. With season four, which was released on November 15th, that conjecture has intensified: tabloid newspapers have been awash with claims from “royal experts” and unnamed friends that the depictions, particularly of Prince Charles, are so cruelly inaccurate as to be “trolling on a Hollywood budget”.

If they do indeed watch the show, the royal family may well be unhappy with it. The first episode of this new season opens in 1979, with the election of Margaret Thatcher as prime minister, and concludes in 1990.

These were not good years for “the firm”, defined as they were by the union of Charles and Lady Diana Spencer. Princess Diana’s ascent to the status of adored public figure-becoming the “queen of people’s hearts”-was matched only in speed and spectacle by the implosion of her marriage.

“The Crown” had, thus far, portrayed the royals as flawed but sympathetic victims of their highly unusual circumstance. This season is less kind: they appear self-serving, petulant and myopic. Thatcher, played with almost alarming verisimilitude by Gillian Anderson, spends a painful weekend at Balmoral Castle, where she is mocked for not having the right shoes, manners or breeding.

“I am struggling to find any redeeming features in these people at all,” she rasps at her husband. Charles, played by Josh O’Connor, is perhaps the worst of all, so insecure about his own insignificance that he explodes into snivelling savagery towards his wife. (Diana, played sensitively by Emma Corrin, is no angel either, but she is at least more sinned against than sinning.)

Writing in the Telegraph, Simon Heffer claimed that these accounts formed a “high-rent soap opera” and “an appalling travesty of history, wilfully misrepresenting everyone”. (The newspaper’s loyalty to the monarchy is referred to on the show when, in season three, Princess Anne begs to do an interview with it rather than the Guardian.)

According to the Express, Prince William, Charles and Diana’s eldest son, is “none too pleased with it”, feeling that “both of his parents are being exploited and being presented in a false, simplistic way to make money”.

“The Crown” has always been more concerned with gripping plots than rigid historical accuracy, something that no doubt helps explain the show’s wild popularity. Real events provide the show’s scaffolding but scenarios are exaggerated, conflated and, at times, invented entirely. Season four is no exception.

It plays fast and loose with, among other things, the extent of the queen’s interaction with Michael Fagan, who broke into Buckingham Palace in 1982; the timing of the disappearance of Thatcher’s son, Mark; and, according to several sources, the extent of Charles’s affair with Camilla Parker-Bowles (Emerald Fennell) during the early years of his marriage.

The show also takes liberties when portraying its characters’ inner lives. Such fabrications are unavoidable given that the royals, particularly the queen, are famously taciturn about their thoughts and feelings.

The real royals understand the emotive power of a good yarn, however, and that they rely on the public’s goodwill. They have always sought to shape the stories in which they appear.

They trade in symbolism and ceremony, appearing chiefly via pre-planned engagements and carefully thought-out philanthropic projects. They have long attempted to manipulate the media, offering access in return for favourable coverage.

In recent years, as in those preceding Diana’s death in 1997, the royal family has once again lost control of its fairytale. The marriage of Prince Harry to the actor Meghan Markle-praised at the time as proof of the family’s willingness to change-turned sour after the pair cut ties and departed for Canada, citing bullying from the press.

Prince Andrew has been tarnished by his association with the disgraced financier Jeffrey Epstein. Criticism of “The Crown” therefore seems a reflection of the problem faced by the modern monarchy: that it no longer gets to write its own story.
Add Comment