More than a million people in the UK watched the new series of The Crown on its first day of release, the drama's first official TV ratings show.

About 1.1 million people saw at least one episode of The Crown's season five on TV sets on Wednesday, Barb said.

That compares with 7.9 million who watched I'm A Celebrity on ITV.

However, the audience for The Crown's new season - which launched amid a flurry of controversy and publicity - will watch over a longer period, rather than all tuning in on one day.

And more will view it on laptops, tablets and mobiles, which are not included in the Barb figures.

Season five depicts the fortunes of the Royal Family in the 1990s, and has been criticised for taking liberties with historical accuracy.

The ratings declined for each subsequent episode until an audience of about 100 was registered for the 10th and final episode - presumably the number that binged the whole series in a single day after its launch at 08:00 GMT. 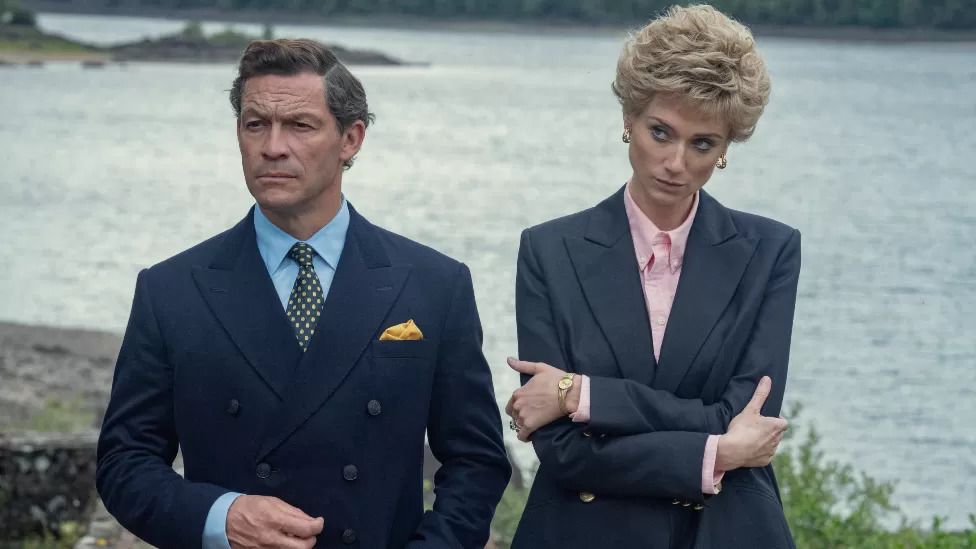 Dominic West and Elizabeth Debicki play Prince Charles, as he was then, and Princess Diana in series five
TV critic Scott Bryan said it is now possible to compare ratings for programmes on traditional broadcast channels and streaming services.

"It does show that streaming services perhaps aren't as massive, in terms of having millions of people watching a new show, as you might think, and that still millions of people are preferring to watch a traditional linear channel instead, and then maybe watch a Netflix show later on," he told BBC News.

The Crown's first-day figures will swell substantially in the coming months, he added.

"I thought it would be higher, but it's still early days. There will be people who would want to watch it immediately. Also I expect millions more will be watching this weekend, and I think Christmas is a huge opportunity for streaming services, because many people will catch up with shows that they have been meaning to get around to.

"Shows such as I'm A Celebrity do really well because there's a sense of urgency. People have to watch it now to find out the latest storylines, but they're not going to be watching it in weeks' time.

"That's not the case with The Crown. These dramas are essentially much longer lasting. They tend to build over time."