The country’s insistence on its right to exist as separate from Russia is understandable, but expunging Russian cultural and linguistic influence risks future trouble.

Yeats was writing about the armed insurrection against British rule in Ireland during April 1916. The uprising had lasted just six days, but Ireland would never be the same.

Ukraine’s ongoing epic defense of its national identity, territorial integrity and sovereignty has already lasted six months, and there is no end in sight. It has left widespread devastation, with towns and buildings wrecked, families traumatized and uprooted, livelihoods upended and lives lost and mourned.

But there’s another transformation underway — and it’s in Ukrainian hearts.

Being told endlessly that they don’t exist has led to the understandable Ukrainian reaction of insisting on their existence, and their right to exist as separate from Russia. This is leading them to try and expunge Russian cultural and linguistic influence on their country. But how they do so, and to what degree, is fraught with future danger.

In a March 2014 speech marking the annexation of Crimea, Russian President Vladimir Putin had declared that Russians and Ukrainians “are one people. Kiev is the mother of Russian cities. Ancient Rus’ is our common source and we cannot live without each other.”

But, although the two nations are ensnared by history, the full-scale war he launched in February has only demonstrated the opposite, and has made it much more difficult for them to live with each other.

Indeed, for a nation that Putin has argued doesn’t exist, Ukraine has been kicking up a storm, and is now taking the fight well behind military frontlines, brazenly crossing the border into Russia and occupied Crimea, disrupting Russian supply lines and logistics, leaving the Kremlin to fall back on preposterous lies to explain explosions witnessed by vacationing Russians.

And much like American journalists like to write about how the United States “lost” this or that country, no doubt, sometime in the distant future, Russian journalists will be chronicling how Putin “lost” Ukraine.

In fact, Putin has not only lost Ukraine, but, worryingly, he has laid the groundwork for a possible long-running ethnic conflict that’s going to make peace even harder to establish and maintain when the war is over.

This toxic legacy will cast a long shadow, adding to the historical grievances and wrongs Ukraine has suffered at the hands of Russian leaders, including the Holodomor — the 1930s terror-famine inflicted on the country by Soviet autocrat Joseph Stalin, leaving millions dead.

Now, on the anvil of Russia’s aggression and barbarity, a much stronger Ukrainian identity is being forged. President Volodymyr Zelenskyy alluded to this in a speech on Wednesday, marking the 31st anniversary of Ukraine’s vote to break with the Soviet Union, saying the country was reborn when Russia invaded on February 24.

But Ukrainians’ firmer sense of nationhood and identity, fueled by fury at what is befalling them, risks becoming less inclusive and more Russian-hating. How could it be otherwise? 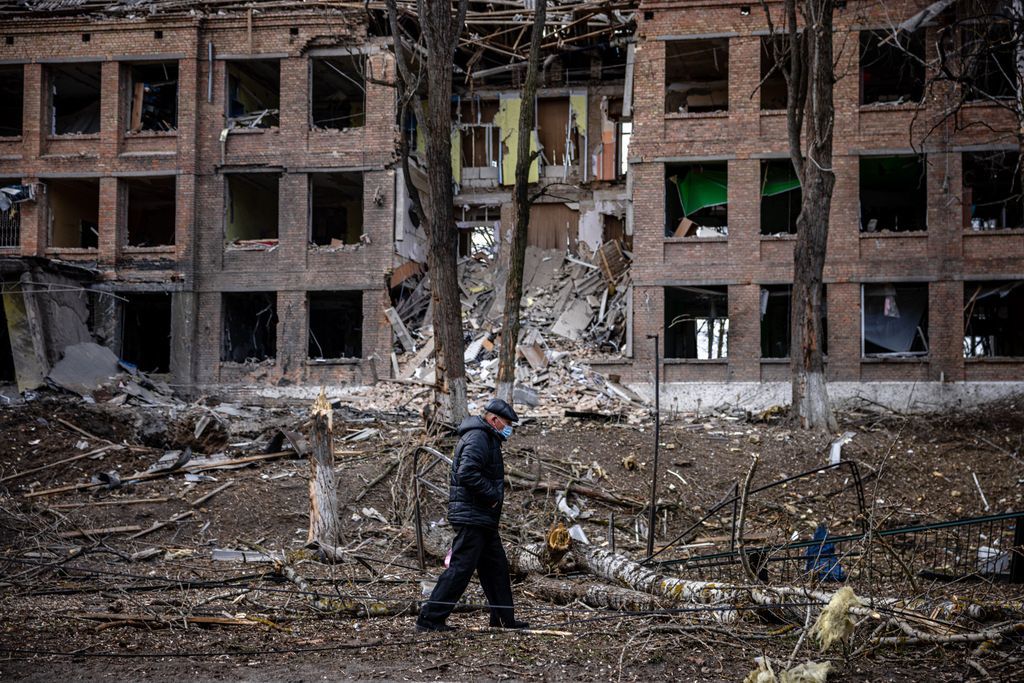 A man walks in front of a destroyed building after a Russian missile attack in the town of Vasylkiv, near Kyiv

Ukrainians have been suffering the brutishness of Russian forces, which have not quailed from targeting civilians and their homes. They have pillaged and raped, they have tortured and executed non-combatants, and at every turn, they have belittled and dismissed the Ukrainian national identity.

However, the burgeoning de-Russification in Ukraine is one of the issues that needs a cool-headed examination. The process of removing Russian cultural and linguistic influence from the country is not an easy — or necessarily equitable — thing to do, when around a quarter of Ukrainians still identify as Russian speakers.

De-Russification predates the February invasion, and it has often merged with de-communization. For example, the names of cities, villages and streets referring to Soviet history and luminaries fell under a ban approved by Ukraine’s parliament in April 2015. And since 2016, all information on notice boards at railway stations and airports can only be given in Ukrainian and English — and not Russian.

Local jurisdictions have also sought to expunge Russian culture before. In 2018, authorities in Lviv introduced a ban on the public use of the Russian-language movies, books and songs until Russian forces had withdrawn from Crimea and the Donbas. The ban was later overturned on human rights grounds and for being unconstitutional.

In January, Human Rights Watch also raised concerns about the lack of protections for Russian speakers in a new state language law that entered into force this year. The law requires print media outlets registered in Ukraine to publish only in the Ukrainian language, or to provide an accompanying Ukrainian version, or equivalent in content, volume and method of print, when publishing in another language. But while exceptions were made for other minority languages, such as English and official European Union languages, there were none provided for Russian.

And since the invasion’s onset, this de-Russification has proceeded apace. Villages and towns have changed street names, Soviet-Russian monuments have been dismantled, and Ivano-Frankivsk proudly announced it had become the first city to be utterly free of any Russian-origin place names.

“We will not have anything Russian left here,” Oleksii Danilov, secretary of the National Security and Defense Council, said in April. A poll published by Rating just a few days earlier had found that 76 percent of Ukrainians backed the renaming of streets and buildings and other structures that were associated with Russia.

Yet, this still leaves a large minority who don’t; and history has a way of not being denied or canceled.

Nonetheless, in June, the Ukrainian parliament passed a set of new laws banning the distribution of Russian books printed overseas, and the playing or performance of Russian music by post-Soviet era artists, further seeking to distance the country from Russian culture.

But through the often tragic twists and turns of Ukraine’s tangled history, and the cultural imperialism of Russian czars and communist autocrats, Ukrainian and Russian culture are inextricably linked and have contributed to each other’s shaping — for good or ill.

Ukraine’s national poet Taras Shevchenko, viewed among the originators of modern Ukrainian literature, is testimony to that. Revered for his nationalistic poems written in Ukrainian, which contributed greatly to the growth of the country’s national consciousness, his poem “The Testament” is lauded as an anthem of national sentiment. But he also wrote poems in the Russian language and kept a private journal in Russian.

And there are risks in rejecting all things Russian. First, it gives fodder to Kremlin propagandists, whipping up anti-Ukrainian feeling both in Russia and among Russian speakers and ethnic Russians in Ukraine. And second, aggressive de-Russification will make it even harder for all Ukrainians, regardless of their traditions and pasts, to reconcile and live together peaceably.

In his independence day speech this week, Zelenskyy vowed Kyiv’s forces will retake Russian-occupied Crimea. But if that day comes, how will Kyiv approach de-Russification? Will it still insist on the use of the Ukrainian language in most aspects of public life on a peninsula where 65 percent of the population are ethnic Russian?

As Ukraine goes about trying to win this war, it also needs to think about how it will win the peace.