Located between Britain and France, the Minquiers have long been subject to the squabbles of dukedoms and governments, torn between Normans, Britons and French for 1,000-plus years.

The southern-most building in the British Isles is not a crumbling castle, built to repel would-be conquerors; nor is it a lonely lighthouse, flashing a warning beacon to passing seafarers.

It is a public toilet.

"This toilet has the distinction of being the most southern building in the British Isles," reads its neatly printed sign. "Please use with care! The nearest alternative is Jersey 11 miles – Chausey 10 miles."

This toilet has the distinction of being the most southern building in the British Isles. Please use with care!

The loo sits on the edge of a cluster of stone cottages on the miniscule Maîtresse Île, the only island in the tiny Minquiers archipelago to bear any imprint of civilisation. This is the British Isles' southern frontier: a group of islands and reefs 10 miles south of Jersey, at the mercy of one of the largest tidal ranges in the world.

At low tide, the islands have a land area around 10 miles long and 7 miles wide – larger than Jersey itself, or the city of Manchester. At high tide, just six hours later, they disappear: barely a few rocks protrude from the water, adding up to around 0.004 square miles. This lends the Minkies, as they are known to locals, a strange atmosphere: part rocky desert-island chain, part watery Atlantis, straddling the boundary between land and sea. 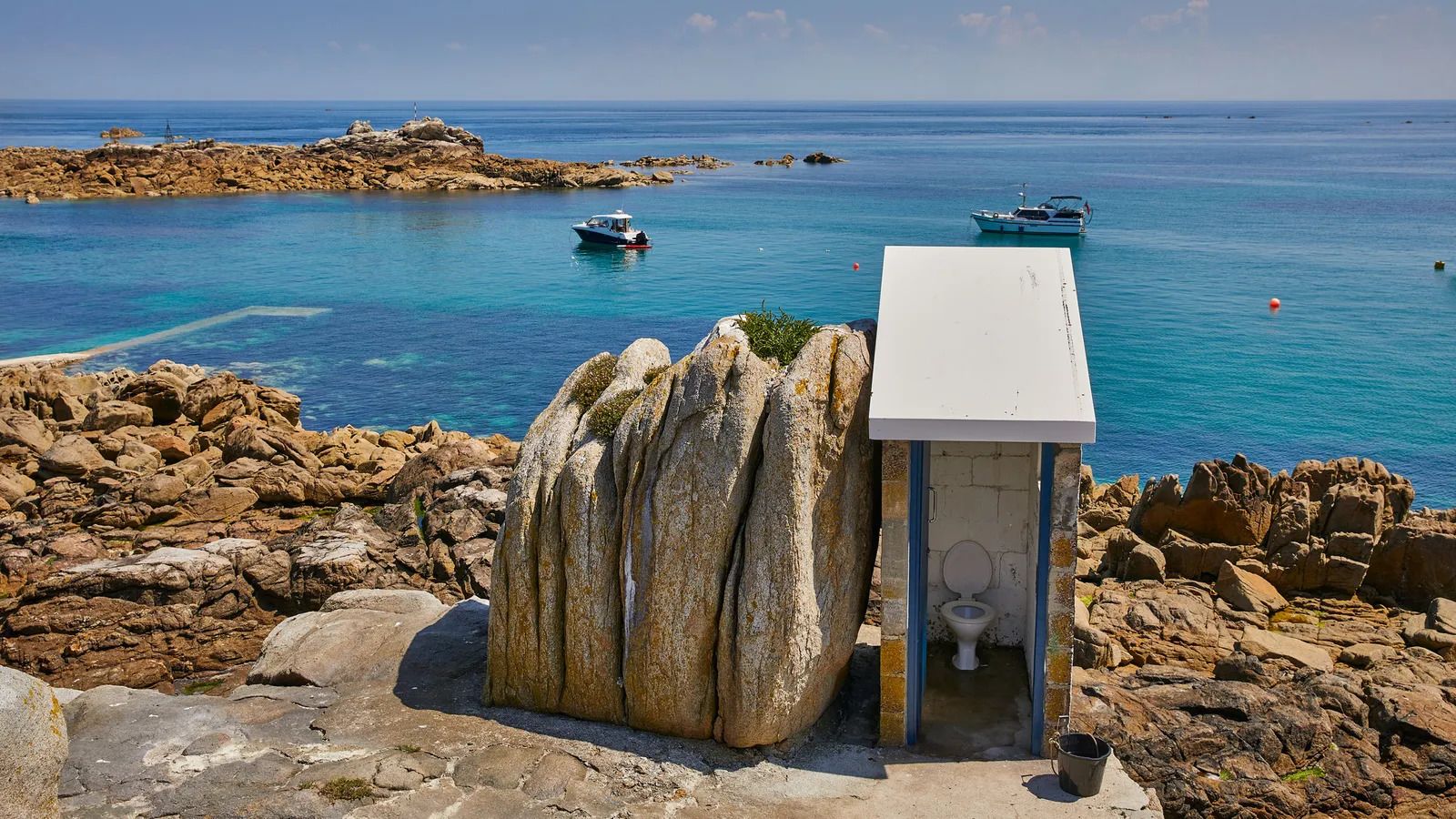 This is a liminal place – a place in between – in more ways than one. Floating between Britain and France, the Minquiers have long been subject to not just the whims of the tides, but the squabbles of dukedoms and governments, torn between Normans, Britons and French for more than 1,000 years. Today, they are under the jurisdiction of Jersey, counting as a self-governing part of the British Isles but not part of the United Kingdom.

"It's been fought over since 955 CE," said Josh Dearing, skipper of the Jersey Seafaris boat that had just ferried me to Maîtresse over a pancake-flat English Channel, "but the buildings have been here since the 1800s."

Dearing – who doubles as a tour guide – led me through Maîtresse's ghostly village, its stone buildings in varying states of disrepair and decay. "They were built by fishermen from the harbour of La Rocque [in southern Jersey], and also miners and quarrymen [who were] after the island's granite," said Dearing. Foragers for vraic – seaweed used as fertiliser – would also make landing here. On the island's northern shore are the ruins of a former hospital, used to treat miners' injuries during the quarrying period in the 19th Century. The buildings sit on the only part of the island that doesn’t vanish with the tides. For the same reason, this is the only scrap of land on the Minquiers that supports greenery, in the form of scented pelargoniums – planted by fishermen who used their soft leaves as toilet paper.

Dearing pointed out a neatly carved graffito on the hospital's outside wall, displaying the initials "C BS" above a date: 1865. Most of the buildings date from this time. Nowadays a few of the cottages are still used by fishermen, but most are privately owned by a handful of Jersey families, who will spend a night or two on Maîtresse when the weather is fine. There are no permanent residents, and no hotels – or anywhere else – for tourists to stay. Sales of the cottages are rare, and the owners are protective of their property. 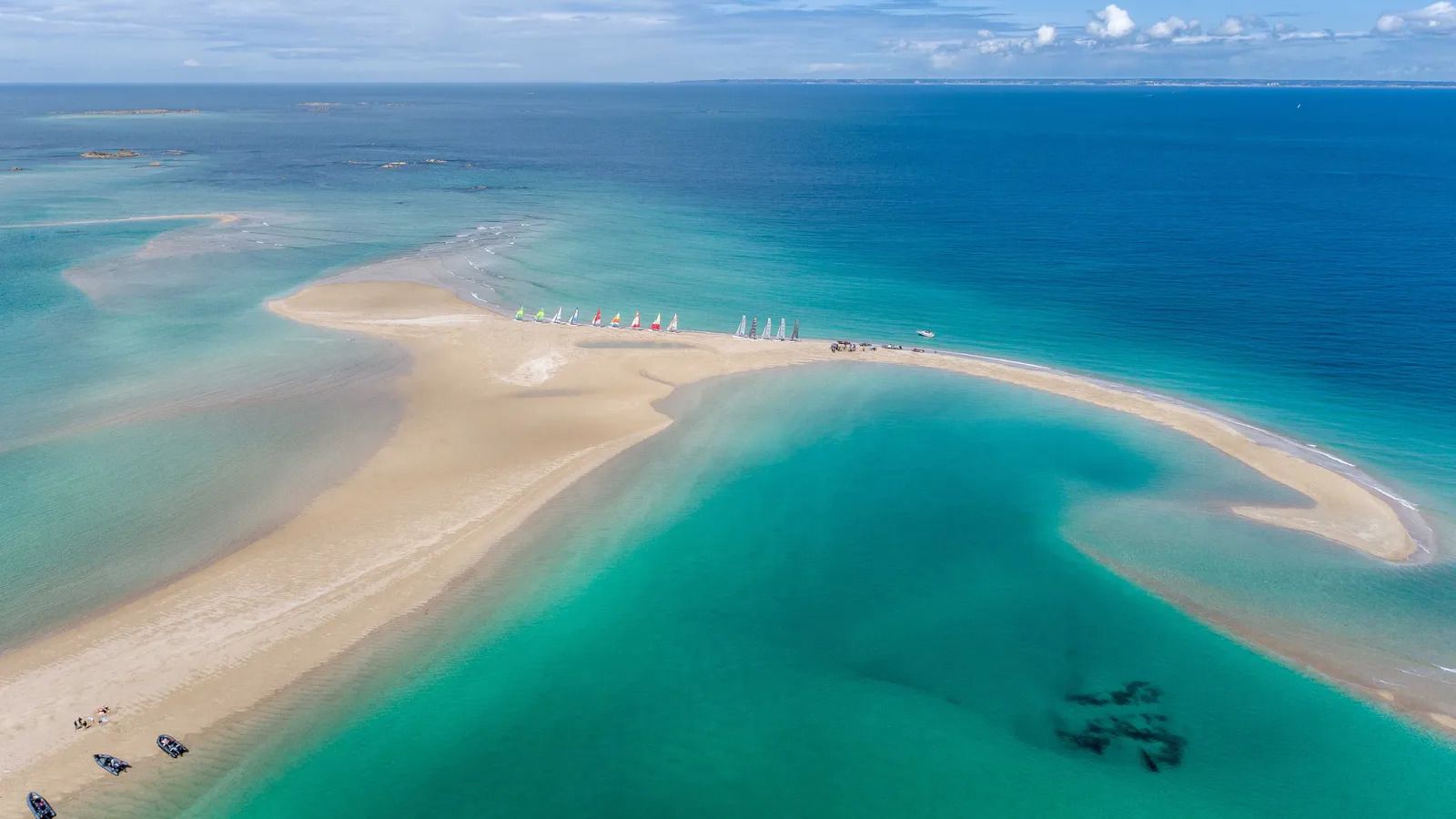 Each day, the islands fluctuate between being high and dry and almost entirely submerged by the sea

As well they might be, for invaders from near and far have long coveted the Minquiers for their strategic and economic importance.

"Whoever controls the Minquiers controls the fishing grounds," explained maritime historian Doug Ford, "and for the last 200 years this has also meant the territorial waters. The offshore reefs create a massive barrier, funnelling approaching vessels into easily monitored spaces."

The Minquiers were ceded to Edward III of England in 1360, passed into the ownership of French monasteries, and were seized back by Henry V in 1413. They became a favoured hideout for pirates and smugglers who took advantage of the islands' remoteness and inaccessibility – these reefs are treacherous, and have dashed many vessels to shipwreck.

The islands were the setting for a diplomatic crisis in 1929, when a Parisian banker decided to build a house here; and again in 1939, when the French artist and yachtsman known as Marin-Marie carried a prefabricated hut to Maîtresse and raised the French flag over the island.

When the occupying Nazis were booted out of Jersey on 9 May 1945 – the closest they got to the United Kingdom – a group of German soldiers remained marooned on the Minquiers for several weeks, unaware that the war was over. 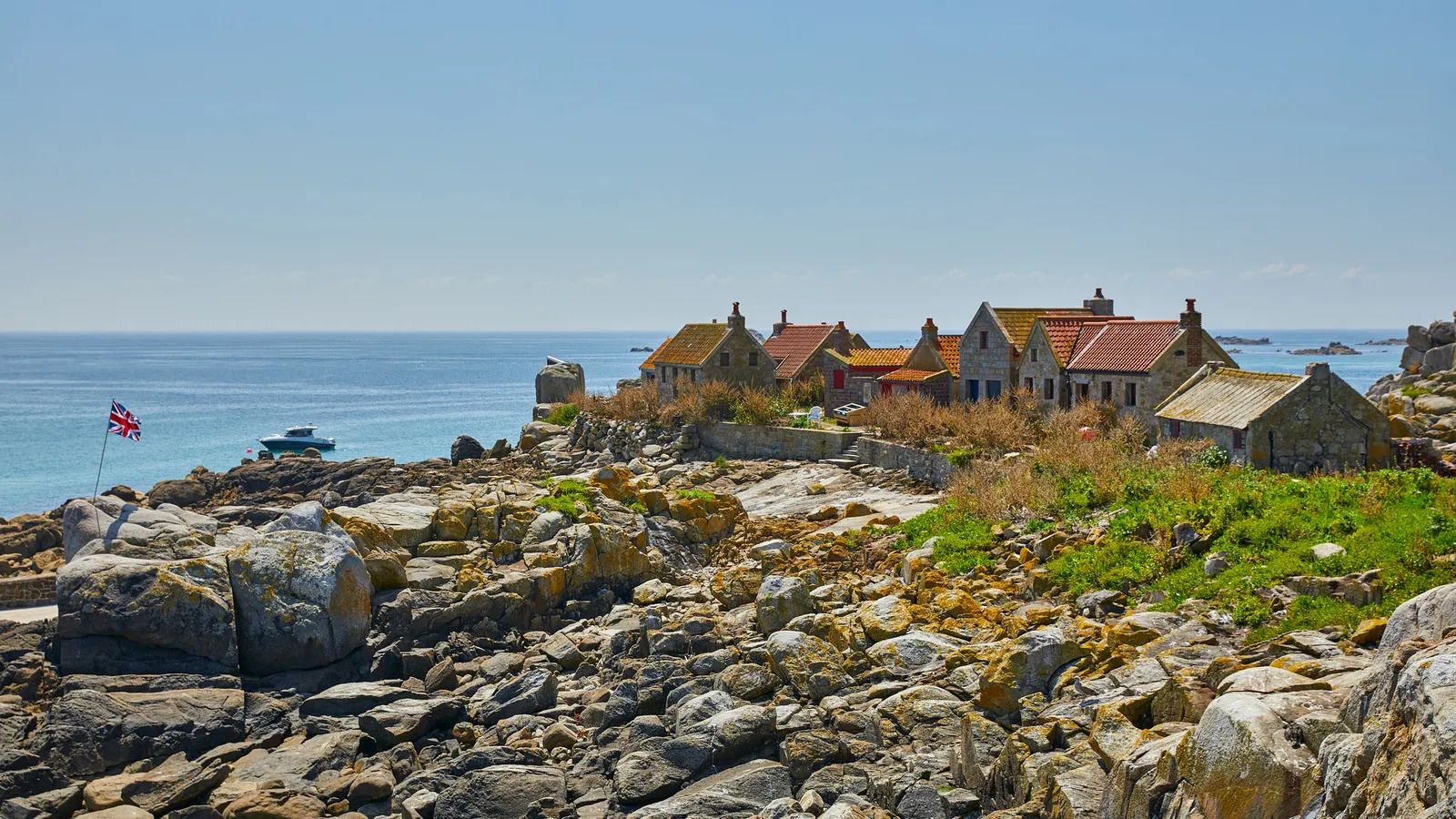 The Minquiers remained the source of long-standing dispute between England and France until 1953, when their legal position was finally settled – with the International Court of Justice declaring British sovereignty over the isles. That hasn't stopped their disputed status occasionally descending into farce. On four occasions in the last 40 years, the islands have been "invaded" by groups claiming to represent the Kingdom of Patagonia, an unrecognised state declared in 19th-Century Chile and Argentina by a crazed French lawyer, Orélie-Antoine de Tounens. His cause was revived a century later by his countryman Jean Raspail, a right-wing author famous for his controversial race-baiting novel Le Camp des Saints, which predicted that mass immigration would precipitate the downfall of Western civilisation.

Raspail was partial to what he called "games that are not entirely games"; elaborate publicity stunts such as his 1984 invasion of the Minquiers. Followed by a coterie of what the press at the time referred to as "sozzled French students", Raspail raised the blue, white and green tricolour of Patagonia over Maîtresse Île, claiming retaliation for Britain's invasion of the Falkland Islands. He returned in 1998, repainting the island's toilet hut in Patagonian colours, and repeated the feat in 2019 as a reaction to Brexit, this time replacing the toilet door sign with one declaring it the northern-most building in the Kingdom of Patagonia. In between, in 2012, came a softer gesture: on attempting to raise the Patagonian flag once more, the invading party discovered a child from a visiting Jersey family playing beneath the flagpole, so they contented themselves with sticking a miniature flag on the toilet door instead.

Our boat tour stopped near Maîtresse to swim at a perfect sandbank, its blonde shores visibly expanding as the tide began its long retreat. Beneath the baby blue sky of a perfect summer's afternoon, it was hard to imagine that this was ever a battleground. Well-heeled Jersey families fired up barbecues and frolicked in the sea; the gleaming white hulls of yachts – not encroaching warships – crowded the horizon. Still, there remained a sense of eerie dislocation; even my phone wasn't sure where it was, its clock constantly flickering an hour forward then back again, in limbo between British and French time zones. I felt like I was in an episode of Lost, only with more deck shoes and pink shorts. 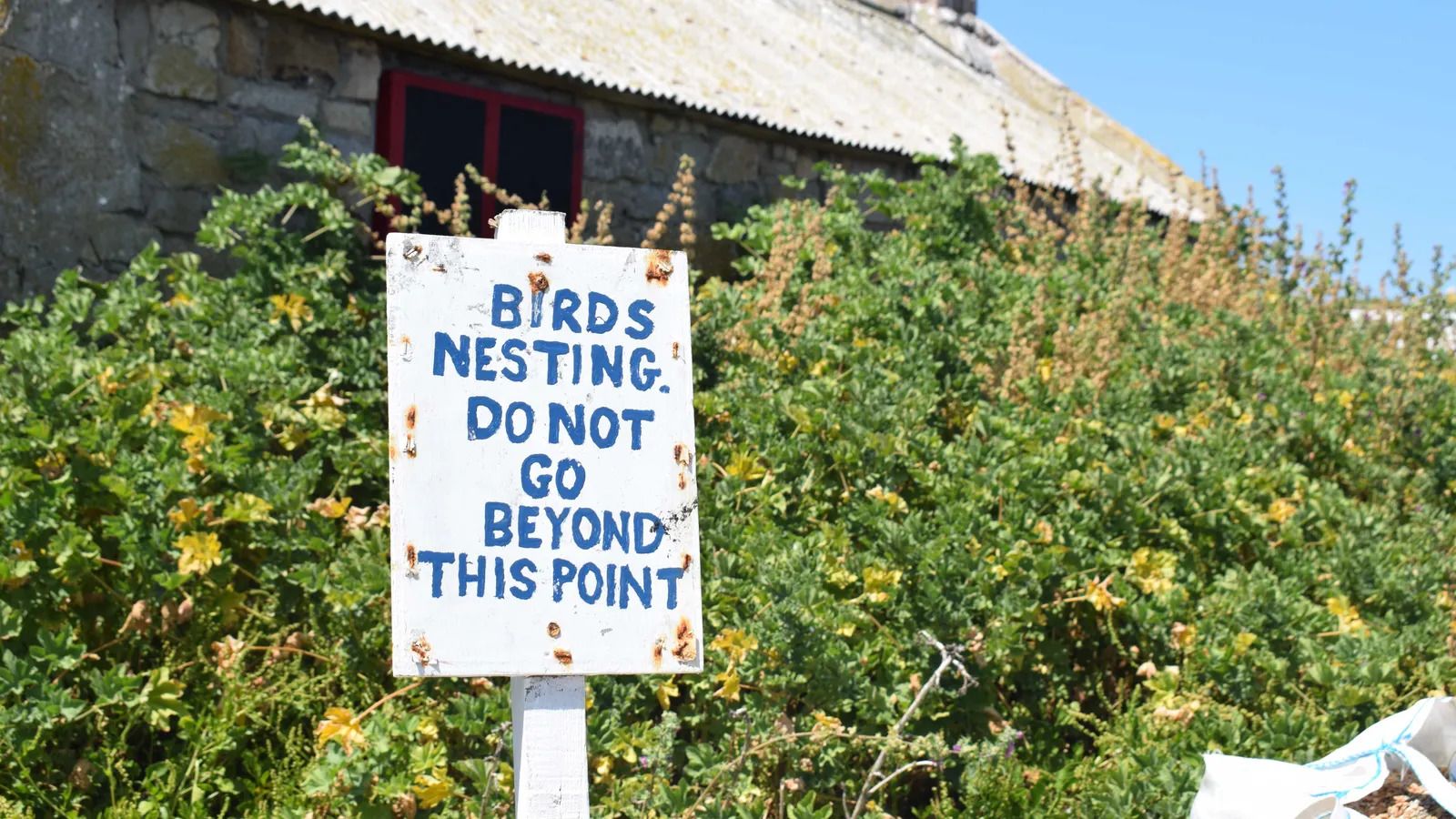 Oystercatchers peeped overhead. On Maîtresse I had noticed wooden signs, reading warnings: "Birds nesting. Do not go beyond this point", and "Gull nesting. Keep away!". Dearing told me that the signs referred to the islands' black-backed gulls. "Three times the size of normal seagulls, and 10 times as angry," he said. "If you see me running – run after me."

The birds are not the only animals making the most of the area's unspoilt ecosystem and relative dearth of humans. "The Minquiers is a location of outstanding natural beauty, both above and below the tide line," said Sam Blampied, a PhD researcher studying the islands' marine ecology at the University of Plymouth. "The large tidal range means the currents are particularly strong at times, and also means the intertidal area is vast. This has resulted in a diverse array of habitats." She mentioned colour-shifting cuttlefish and "communities of peacock worms that look like bouquets of flowers on the seabed, a habitat that has rarely been recorded elsewhere".

The diversity of this unique place makes the Minquiers very special, whether that is its unusual geography or the array of wildlife that can be spotted

The need to preserve the Minquiers' ecosystem is central to the cause of the Aspiring Jersey Island Geopark project, which looks to secure Unesco Geopark status for Jersey and the surrounding area. "The diversity of this unique place makes the Minquiers very special," said Millie Butel, who is leading the project, "whether that is its unusual geography or the array of wildlife that can be spotted – shags diving headfirst into the sea to feed off sand eels and small fish, or an Atlantic grey seal breaking the surface to watch the bobbing boats."

We experienced exactly this as our boat departed the sandbank for the journey back to Jersey: the shiny, smooth head of a seal, observing us with the polite wariness of a neighbour investigating a disturbance over a garden fence. "It would appear that from the earliest times, human activity on the reef has been of a fleeting, transient nature: Bronze Age seal hunters, quarrymen and fishermen," Ford had told me. To this day, this is a place that people may only pass through, permitted only as visitors on the shifting sands of Britain's eerie southern shore.