One suspect dead, other still at large after attacks at James Smith Cree Nation and Weldon village in Saskatchewan.

Police in Canada are still searching for one of the two men identified as suspects in a stabbing spree in the central province of Saskatchewan that left at least 10 people dead.

The second suspect has been found dead, Royal Canadian Mounted Police (RCMP) said during a news conference on Monday evening.

Another 18 people were wounded in the attacks on Sunday in the remote Indigenous community of James Smith Cree Nation and the nearby town of Weldon.

“It is horrific what has occurred in our province today,” RCMP Assistant Commissioner Rhonda Blackmore told a news conference on Sunday.

Here’s what we know so far:

What happened during the attack?

*  Police received a call at 5:40am (11:40 GMT) on Sunday, reporting a stabbing at the James Smith Cree Nation. More calls describing knife attacks in the area came in quick succession, reporting violence at 13 locations.


*  Blackmore said some of the victims “may have been targeted and some may be random”, and a motive was not immediately clear. She noted several victims identified the attackers.


*  The attackers fled in a black Nissan Rogue and were sighted in Regina, the provincial capital that is more than 300km (185 miles) to the south of the violence. A police search was expanded to include the neighbouring provinces of Manitoba and Alberta.


*  Television images showed rural homes, in fields of tall grass and trees, in James Smith Cree Nation cordoned off with police tape. On social media, residents shared images of the attacks’ aftermath, including a broken door handle to a burgled home. 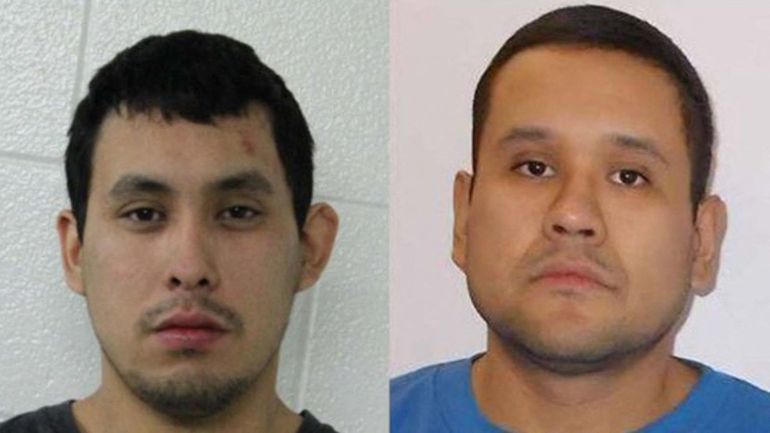 Who are the suspects?

*  Saskatchewan RCMP said on Monday evening that the suspects, Damien Sanderson and Myles Sanderson, were brothers.


*  “His body was located outdoors in a heavily grassed area, in proximity to a house that was being examined. We can confirm he has visible injuries. These injuries are not believed to be self-inflicted at this point,” Blackmore of Saskatchewan RCMP told reporters.


*  In May, Myles Sanderson was listed as “unlawfully at large” by Saskatchewan Crime Stoppers, a programme that encourages the public to cooperate with police to find wanted suspects. There were no further details about why he was wanted at the time.


*  CBC News reported that the “unlawfully at large” information was issued after Myles Sanderson — who had been serving a nearly five-year prison sentence for assault, robbery, mischief and uttering threats — stopped meeting with his parole officer after getting a statutory release. 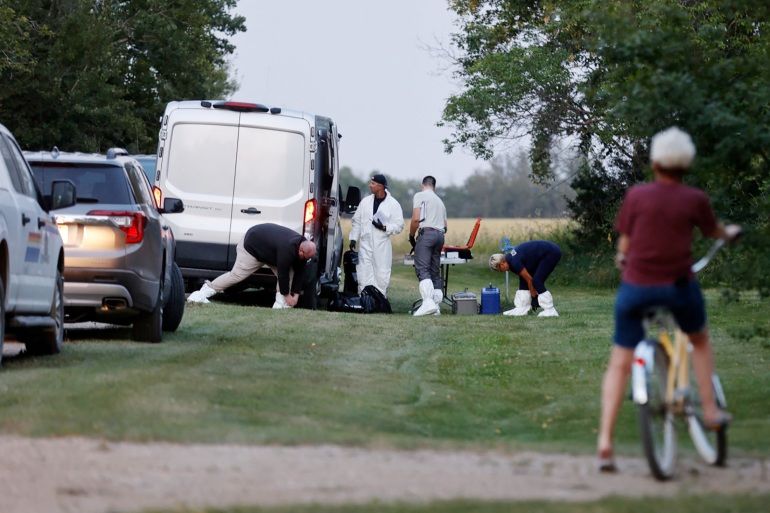 A forensics team investigates a crime scene after multiple people were killed and injured in the village of Weldon, Saskatchewan

Have the suspects been charged?

*  The Saskatchewan Royal Canadian Mounted Police (RCMP) said on Monday that charges had been laid against both Myles Sanderson and Damien Sanderson.


*  Myles Sanderson has been charged with three counts of first-degree murder; one count of attempted murder, and one count of break and enter, police said.


*  “Further charges are anticipated as the investigation progresses,” the RCMP said.

What do we know about the victims?

*  One victim of the attack was identified as Lana Head, a mother of two.


*  Her former partner, Michael Brett Burns, told the Aboriginal Peoples Television Network (APTN) that her male partner was also killed in the attack at the James Smith Cree Nation.


*  “It’s sick how jail time, drugs and alcohol can destroy many lives,” Burns said. “I’m hurt for all this loss.”


*  Residents of the village of Weldon also identified Wes Petterson, 77, as one of those killed.


*  Ruby Works told APTN the widower was known as a helpful neighbour who loved cats and made homemade jam. “He didn’t do anything. He didn’t deserve this. He was a good, kind-hearted man.”


*  Ivor Wayne Burns of James Smith Cree Nation said three of the victims — his sister Gloria Lydia Burns, a woman and a 14-year-old boy — died at a single location. Gloria Burns, a member of the community’s crisis response team, was killed when she attended an emergency call.


*  “This tragedy that happened here on our land, it’s all because of drugs and alcohol,” said Ivor Burns, adding that the involvement of drugs in the killings was discussed at a community meeting on Monday.


*  The identities of other victims were not immediately released.

Where did the attacks happen?

*  James Smith Cree Nation is an Indigenous community with a population of about 3,400, although only about 1,900 members of the community currently live on the reserve.


*  The Nation takes its name from the original chief of the James Smith Band and the reserve was officially established in an 1876 treaty. It is one of the more than 630 First Nation groups, which include Indigenous people who are distinct from the Inuit and Metis communities.


*  Neighbouring Weldon is a village of about 200 people. 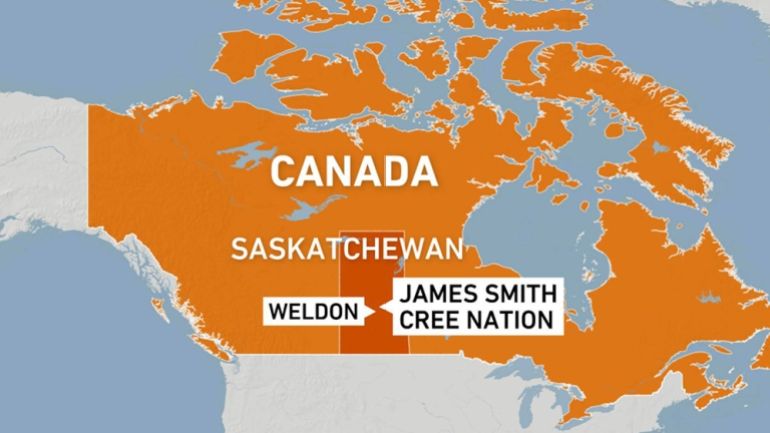 Are mass attacks common in Canada?

*  Sunday’s attack is among the deadliest in Canadian history and, while mass killings are not as common as in some countries, there have been several incidents in recent years.


*  In 2020, a man posing as a police officer fatally shot 22 people in Nova Scotia province in the worst mass killing event on record.


*  In 2017 a man opened fire during evening prayers at a mosque in Quebec City, Quebec.