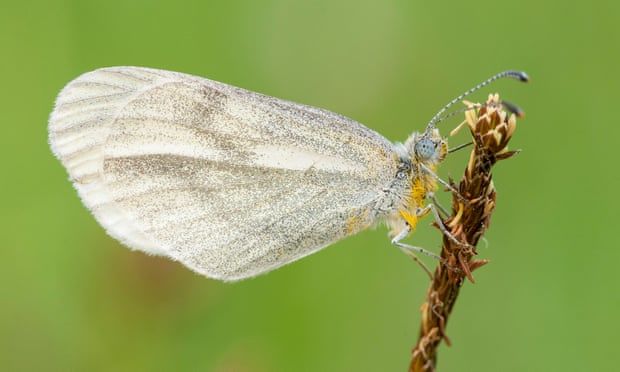 A low-carbon co-operative that heats the homes of retired sailors has helped one of Britain’s rarest butterflies return to a nearby wood.

Springbok Sustainable Wood Heat Co-operative is a unique scheme using woodchip harvested from woodland within yards of 49 households in Surrey to provide heating and hot water.

The biomass scheme, which replaced oil boilers that served Care Ashore, a charity providing supported housing for retired seafarers, has enabled the 16.5-hectare Park Copse to be managed for conservation, with dense trees thinned and “waste” brash turned to woodchips for heating.

“It’s a lovely scheme,” said Martin Crane, an energy consultant and unpaid director of the scheme. “The biodiversity benefits are wildly exciting and people will be thinking: ‘Why can’t we do this in our village?’ If you switch from oil to biomass, that’s a massive reduction in your carbon footprint.”

This year, the rare and declining wood white has been found in the rejuvenated wood for the first time, alongside 25 other butterfly species including purple emperors and silver-washed fritillaries.

Biomass has been criticised for fuelling the destruction of biodiverse forests across Europe and for not being carbon neutral, but Springbok’s directors say their local, sustainable scheme could be replicated elsewhere in Britain, using brash that would otherwise be burned as waste, enabling woodland management that brings genuine conservation benefits.

“Biomass so often has a poor name and quite often for good reason, but this shows it can be done locally and with conservation in mind,” said Tom Parker, another unpaid director for the project who has monitored the surge in butterfly species in Park Copse with help from Butterfly Conservation.

District heating provided by cooperatives is widespread in Denmark and advocates say biomass schemes could be used to provide low-carbon heat in historic villages currently supplied by oil or expensive electric systems.

Solid-wall houses in conservation areas cannot be easily retrofitted with insulation. Electric heat pumps are considered too expensive to run in poorly-insulated homes, making biomass an attractive low-carbon alternative to oil or gas.

Biomass heat from imported wood taken from virgin forests overseas is environmentally destructive, but if woodchip can be obtained from local woods there can be clear conservation benefits: many woods in Britain are unmanaged, which makes them too dark for declining sun-loving woodland species such as the wood white, pearl-bordered fritillary and many wildflowers.

The brash supplying the Springbok co-op from Park Copse has no commercial value and would have been burned by foresters in the cleared woodland as waste if trees were harvested for timber.

The Springbok heating system cost £375,000 to install six years ago, which was raised by Energy4All, a co-op that funds renewable community energy projects across the country. Small investors receive a 5% return on their financial support. The boilers have a 20-year lifespan but can be renewed with the insulated pipes delivering the heat lasting for 60 years.

The 49 homes are heated at a price just below the cost of their old oil-fired heating, with the scheme supported by 20 years of payments from the government’s Renewable Heat Incentive, which was stopped for new biomass schemes after criticism of its generous subsidies.

The Springbok co-op is now able to return some money to the charity to help reduce its heating bills.

While community co-ops providing renewable electricity have proved popular, with solar panel power easily sold into the national grid, district heating co-ops are more challenging, according to Crane, because they involve putting heat into individual homes, maintaining them and serving a multitude of customers.

“It’s just too frightening for most co-ops,” he said. “To get everybody in a village to connect with a heat network is not decided overnight.”

More than 150 homes in the village of Swaffham Prior near Cambridge are being fitted with a district heating system provided by ground and air source heat pumps, but another reason such schemes are not more widespread, according to Mike Smyth, the chair of Energy4All, is because of uncertainty over the government’s new, much-delayed heat policy.

“Denmark gives the example of the way to go where they have a large number of community-owned, low-carbon district heating systems,” he said.

Co-operative renewable heating schemes can currently qualify for government grants that fund half of their capital costs, and there is also up to £30,000 in public money available to support a feasibility study, but Smyth said a bigger shift to low-carbon heating would only occur when fossil fuels, particularly gas, were taxed more highly.

Britain has one of the lowest tax rates on gas in Europe.

“It’s designed to cause climate change,” said Smyth. “The government’s heat policy will have to include either a change in the pricing of fossil fuels by having a carbon tax or having a revenue support system [for low-carbon schemes],” he said. “Biomass has a role, not a huge role, but with heat we need many more individual or district solutions than we do with electricity, where solar can deliver straight into a building.”
Add Comment