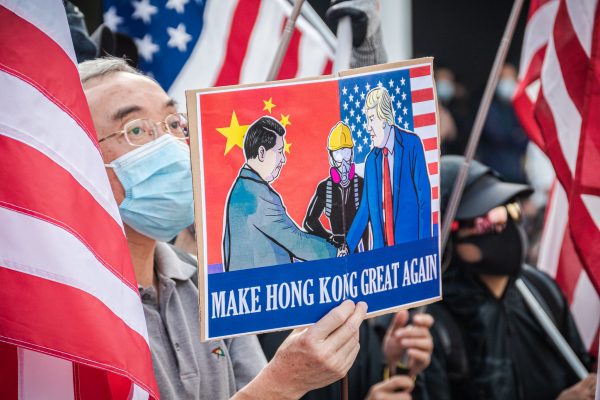 Worry about the reliability of Democratic presidents is based on a selective reading of past and current events.

Much has been made of the support for U.S. President Donald Trump and his recent bid for re-election among small but vocal segments in Taiwan and Hong Kong. Such sentiment appears surprising at first blush, given that many of those articulating such positions also claim to oppose authoritarianism, support democratic practices such as the rule of law, and would even be likely targets for white supremacists.

These seemingly incongruent stands come, above all, from deep apprehensions about the Chinese state – the People’s Republic of China – and trepidation about the consistency of U.S. support, but ultimately rest on a selective reading of current and past events. Overlooked, too, are the broader, structural drivers of U.S.-China relations and the agency of actors based in Taiwan and Hong Kong.

Such dynamics likely have a much stronger effect on U.S. foreign policy than the role of any single political party or individual in the White House, especially at a time of increasingly strained U.S.-China relations and the fraught regional conditions that result.

The Enemy of My Enemy

A primary motivation behind support for Trump among Taiwanese and Hong Kongers seems to be the view that he is “tough on China.” People who ascribe to this view believe that the U.S.-China trade war, U.S. efforts to curtail the operations of Chinese technology companies such as Huawei, ZTE, and TikTok, and U.S. arms sales to Taiwan signal a strengthening line toward Beijing led by Trump.

They see the passage of U.S. legislation upgrading ties with Taiwan, offering support for pro-democracy protesters in Hong Kong, and punishing Hong Kong and Chinese officials for undermining the Basic Law and law enforcement excesses in Hong Kong as backing by the Trump administration.

Beijing’s admonishments of Washington for allegedly meddling in Hong Kong and Taiwan further strengthen the view that the Trump administration is getting its policies right.

Behind these perspectives is an understanding of Beijing’s ties with Hong Kong and Taipei as fundamentally negative-sum: that what is bad for China’s government necessarily becomes good for Hong Kong and Taiwan.

Direct and unequivocal U.S. pressure on Beijing, this thinking goes, gives reprieve to Hong Kong and Taiwan from mounting PRC attempts at control. Responding to Washington distracts Beijing from forward leaning action toward Taiwan and Hong Kong and can create valuable breathing space, if not restrict China’s options on a more long-term basis by whittling down its capabilities.

As a result, they are willing to throw their lot in with Trump, much as critics of the United States elsewhere are willing to turn a blind eye to China’s ill-treatment of minorities. In contrast, there is much suspicion toward those of Trump’s opponents who seem ready to repudiate everything related to the administration, including support for Hong Kong and Taiwan as well as opposition to China.

Part of the view about Trump’s toughness comes from a broader assumption that Republicans are generally strong on China and Democrats weaker. The Trump administration’s Taiwan and Hong Kong friendly policies and antagonism of Beijing appear to Trump supporters in Taiwan and Hong Kong as being consistent with what they believe is overall Republican resolve toward Beijing.

They emphasize President Ronald Reagan’s Six Assurances in support of Taiwan’s security following Beijing’s attempts to limit U.S. arms sales to Taiwan through the 1982 US-China Joint Communiqué. President George H.W. Bush’s sale of F-16s to Taiwan and President George W. Bush stating in 2001 that the U.S. should do “whatever it takes” to defend Taiwan are further examples of robust Republican policies. Many Trump supporters in Taiwan and Hong Kong believe that such positions will soften with Democrats in office.

Democrats, according to this narrative, are weak or eager to compromise with Beijing. President Jimmy Carter’s de-recognition of Taipei and President Bill Clinton’s lukewarm support for Taiwan President Lee Teng-Hui’s visit to Cornell University along with the “Three Noes,” characterize the Democrats’ soft approach to China in the minds of Trump-supporting Hong Kongers and Taiwanese.

Notably, the Clinton administration even backed China’s inclusion into the WTO after having attacked the George H.W. Bush administration for “coddling the ‘butchers of Beijing’” in wake of the Tiananmen crackdown. Trump-supporting Taiwanese and Hong Kongers similarly read weakness in the Obama administration for its more sporadic Taiwan arms sales policy. This comes on top of a view that the Obama administration’s naiveté and gullibility over Beijing’s promises and assurances enabled China to reclaim and arm features in the South China Sea and establish control over the Scarborough Shoal.

This came against the backdrop of President Barack Obama’s “Rebalance to Asia,” which aimed to address the perception that George W. Bush administration’s policies resulted in China “eating America’s lunch.” Clinton as well demonstrated support for Taiwan’s security during the 1995-96 Taiwan Strait Crisis and backed Taiwan’s entry into the WTO immediately following China’s accession. Finally, the Carter administration was responsible for a significant 1979 arms sale to Taiwan that provided a key benchmark for subsequent acquisitions by Taipei for at least a decade.

There was then a view in Washington during the 2000s that Taipei was a potential “troublemaker” that had to be managed. The George H.W. Bush administration pushed to normalize ties with Beijing following the bloody Tiananmen crackdown and its sale of fighter aircraft to Taiwan rested, in part, on an attempt to boost flagging support during the 1992 presidential election campaign.

Even Reagan, who indicated a desire for official ties with Taiwan in his 1980 presidential campaign, allowed the 1982 Joint Communiqué to proceed. The Nixon administration’s rapprochement with Beijing in the early 1970s, of course, set the stage for Taipei’s diplomatic isolation, including its expulsion from the United Nations in 1971.

Broader structural trends – such as the increasingly acrimonious U.S.-China relationship – play a bigger role in shaping U.S. policies than which individuals and political parties occupy the White House, something that Hong Konger and Taiwanese Trump supporters fail to acknowledge. Stronger U.S. policies toward China amid growing tensions as well as supporting a democratic Taiwan and democracy in Hong Kong – which are not, it must be pointed out, completely reducible into each other – are among the few remaining issues on which there is broad bipartisan consensus in the United States.

Legislation such as the Hong Kong Human Rights and Democracy Act (HKHRDA), the Taiwan Travel Act, and TAIPEI Act received virtually unanimous bipartisan congressional support and are not simply executive branch decisions from the Trump administration.

Note that the 2014 version of the HKHRDA that came in the wake of the Umbrella Movement could not make it to the floor of the U.S. Congress, while the proposed Taiwan Security Enhancement Act only passed the House of Representatives in 2000. As a private citizen, Donald Trump even publicly warned the Obama administration in 2014 against involvement in or support for the Umbrella Movement.

Just as important to U.S. policy is the agency of actors in Taiwan and Hong Kong, who often receive less attention than they deserve given the overwhelming attention paid to governments in Washington and Beijing. A reason the Obama administration advanced the GCTF was out of concern that Taiwan’s Beijing-friendly Ma Ying-jeou administration was not focusing sufficiently on developing ties with the United States. The cooling of attitudes toward Taiwan by the George W. Bush administration came from a view that the Chen Shui-bian administration was being excessively adventurous in its handling of cross-strait relations.

Similarly, the Hong Kong government’s efforts to implement Hong Kong’s Basic Law in 2019 and 2020 based on Beijing’s interpretations seemed to have exacerbated concerns about U.S. interests in the territory among both the U.S. government and businesses. Visible and explicit use of force toward protesters and civilians by the Hong Kong Police likely hardened U.S. views toward Hong Kong’s Carrie Lam administration and Beijing’s handling of Hong Kong affairs as well.

Many in Hong Kong understandably feel a sense of unease and even desperation following the implementation of the all-encompassing national security law, while some in Taiwan wish to avoid being painted as troublemakers and isolated again. Such considerations can make the very real possibility of former Obama administration officials taking charge of foreign policy seem worrisome to those who already fear abandonment by Washington and punishment by Beijing. Yet, the contemporary political environment in the United States makes fundamental shifts in U.S. Asia policy unlikely even in light of the changes in personnel and administration, especially as Republicans look likely to retain control of the U.S. Senate.

Taiwan’s external policies also appear steadfast under President Tsai Ing-wen’s leadership and the DPP-controled legislature, even as Beijing and the Hong Kong government seem unlikely to budge from their current policy stances.

More than anything else, current conditions suggest that U.S. approaches toward Taipei, Hong Kong, and Beijing under President Joe Biden are more likely to feature adjustments in strategy and tactics than changes in overall direction.