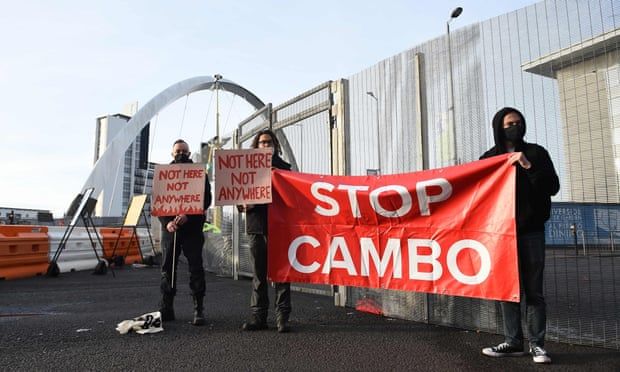 Nicola Sturgeon has been urged to take a tougher stance on phasing out oil and gas by signing up to a new global alliance that calls for an end date for oil drilling.

Scotland’s first minister signalled earlier this week that her government was hardening its position on oil and gas production by confirming she did not believe the new Cambo oilfield off Shetland should be licensed.

After months of pressure to take a more radical position on oil drilling, Sturgeon also confirmed her government could join a new coalition of oil- and gas-producing nations that has committed itself to phasing out oil and gas.

She said Scotland could join the Beyond Oil and Gas Alliance but as a “friend”, the group’s lowest tier of support, instead of as a full or associate member. That tier does not commit signatories to set an end date for oil production.

Sturgeon said she had to act slowly to ensure a “just transition” to renewables for the 100,000 people estimated to be dependent on the oil and gas industry in Scotland.

Sturgeon is facing competing pressures over climate policies: her rejection of Cambo has led to fierce criticism from within the Scottish National party but her Scottish Green party allies in government are pressing her to take a more radical stance.

Mary Church, a senior climate campaigner with Friends of the Earth Scotland, said it was essential oil-producing nations committed to an end date, in part because it would give industry and the affected communities a clear date for which to plan.

She said Scotland had an obligation to show leadership, given its significance as an oil-producing country.

“Signing up to the alliance at the highest level would be a clear indication of this necessary new direction of travel for Scottish government energy policy, and an important next step after Cop26,” Church said.

“A failure to do so would be a failure to follow through on her government’s recent change of position to no longer support unlimited oil and gas extraction. When you’re in a hole, you have to stop digging. To meet the 1.5C goal, we need to keep all fossil fuels safe in the ground.”

The alliance was set up by Denmark and Costa Rica and has France, Ireland, Greenland and Wales, a devolved nation in the UK with fewer powers than Scotland, among its eight full members.

That top tier commits its members to ending all new oil production licences and leases, and to set an end date for oil production consistent with the Paris climate agreement’s quest to limit global heating to well under 2C.

Ireland, an ally of Sturgeon’s devolved government, relies on its own gas fields for 60% of its domestic supplies. Yet in February, the Irish cabinet, which includes Green party ministers, announced a ban on all new hydrocarbon exploration in Irish waters to force the country to focus on renewable energy and cut its carbon dioxide emissions.

Denmark, a small country with a similar population to Scotland that has 55 oil and gas platforms in the North Sea, announced in December 2020 it would no longer license new North Sea fields.

California, Portugal and New Zealand are signed up as second-tier associates as states that “have taken significant concrete steps” to reduce oil production, by removing domestic subsidies or ending financial backing for production overseas.

The “friend” tier commits its signatories to supporting a “socially just and equitable global transition” and the less onerous goals of “alignment” with the Paris agreement and a member’s own climate neutrality targets. So far only Italy has joined as a friend.
#costa rica
Add Comment