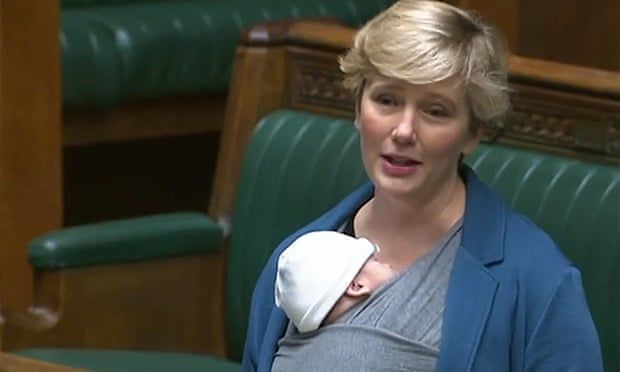 Stella Creasy has criticised the “absurdity” of parliament’s approach to new mothers, after the Commons Speaker said it was up to the chair of a debate to decide whether MPs could bring in their babies.

Creasy, a Labour MP who was reprimanded for bringing her baby into a Westminster Hall debate earlier this year, criticised the position of Sir Lindsay Hoyle, the Commons speaker, who suggested he and his deputies should use their discretion.

In an interview with the Daily Telegraph, Hoyle said that it should be up to the MP chairing the debate to decide whether the presence of a baby would cause any disruption.

But Creasy rejected this as a solution, saying it would not work in practice because an MP with a baby would have to decide whether to use her proxy vote 24 hours in advance or turn up to the debate and risk being turned away.

“Given there is no published list of who is chairing a debate and I have to give up my proxy a day in advance in order to speak, there is every possibility I could turn up but find when I get to a debate that I couldn’t take part because the chair wouldn’t let me,” she said.

“The whole thing reflects the absurdity of how parliament operates when it comes to new parents and why we need proper maternity cover for MPs and an actual proper maternity policy because in any other workplace creating barriers for pregnant and new mothers would be illegal.”

She highlighted research from Delta Poll that found 57% of people thought there should be proper maternity cover for MPs, and 48% of respondents thought bringing a baby into the chamber should always be acceptable or acceptable in some circumstances, while 39% stated it should never be allowed.

Creasy had asked for clarification from Commons authorities after being reprimanded for having her infant son in a sling as she spoke in parliament last month, saying it had not been a problem on previous occasions.

Commons rules state that MPs should not have children or infants with them in the chamber, but Creasy has taken both of her children into the chamber before without any complaints being made.

Hoyle requested a review into whether the rules should be updated and reiterated his view that the “chair on the day has got to make a decision”.

Referring to Creasy’s son, he said: “I saw that baby come into the chamber when I was in the chair. And did it affect the debate? No. Was it a quiet and peaceful baby? Absolutely. Did it disrupt? Not in the slightest. So did it matter to me? Absolutely not.

“What I would say, and I’ll be quite honest with you, is each chair will make a decision. Unfortunately it’s become highly political.

“It is now for others to decide, that’s why the committee is reviewing it. And I will then have to respect its decision.”

He also said he had asked the cross-party procedure committee to examine the rules and whether changes were needed, and that he and his deputies could use their discretion in applying the existing measures.

The issue caused an outcry when Creasy, the MP for Walthamstow, tweeted an email she had received from Commons authorities, which read: “We have been made aware that you were accompanied by your baby in Westminster Hall earlier today.”

It referred to the latest edition of the Commons rulebook, which says MPs should not take their seats in the chamber with a child.

The email from the private secretary to the chairman of ways and means, the formal title for the most senior deputy speaker, read: “I would like to draw your attention to the fact that this also applies to debates in Westminster Hall.”

Creasy had been leading a debate about buy-now-pay-later consumer credit schemes in the hall, a subsidiary chamber where MPs can raise issues of interest to them.

She has repeatedly argued that MPs should have proper maternity cover so that they would not have to turn up to debates in person in order to properly represent their constituents. They are currently given some money for extra case workers for constituency matters but not to carry out their parliamentary work.

Writing in the Guardian about the argument, she said: “With little support from the authorities or indeed my own political party, I have worked as best I can while managing the needs of my now 13-week-old son. That’s why I was baffled to be told I could not take him into parliament with me.

“It doesn’t have to be like this. Whether in New Zealand, Canada or in Europe, parliaments around the world have shown a family-friendly legislature is possible.

“There are thousands of mothers out there who have something valuable to add to our politics, and they want to run. For now they see the mother of all parliaments discouraging mothers and rightly wonder if they will be welcome.”
Add Comment