Cosmic Girl, a reworked Virgin Atlantic Boeing 747 plane, is expected to take off from Spaceport Cornwall near Newquay in the coming weeks, and will then release a rocket capable of carrying satellites into orbit.

The UK has moved a step closer to blasting its first rocket beyond the atmosphere after granting the proposed launch site a spaceport licence.

Spaceport Cornwall, which is based at Newquay's airport, has been authorised to host rocket lift-offs after meeting required safety, security, and environmental standards.

The announcement it had won Civil Aviation Authority (CAA) approval came hot on the heels of NASA launching its most powerful rocket this morning, firing the starting gun on its historic bid to return humans to the moon.

While Cape Canaveral has hosted plenty of launches dating back to 1950, Cornwall's first remains in the pipeline.

Cosmic Girl, which is a reworked Virgin Atlantic Boeing 747 plane, is due to take off from the spaceport in the coming weeks and the granting of the licence allows rehearsals to begin.

Transport Secretary Mark Harper said the Virgin Orbit launch "reinforces our position as a leading space nation as we look to the future of spaceflight".

It will "spur growth and innovation across the sector, as well as creating thousands of jobs and apprenticeships", the minister added.

What do we know about the UK's space programme?

The UK has accelerated its bid to become a bigger player in the space race since last year.

The spaceport licence follows nearly 150 satellite licences already approved by the CAA since becoming the UK's space regulator in July 2021.

Richard Moriarty, chief executive of the authority, said: "When we became the space regulator, we committed to delivering in an open, effective and proportionate way, with public safety at its heart.

"Our work does not stop with this licence decision, as we continue to assess other licence applications and oversee the effectiveness of licenced activities, all enabling the UK's space sector to grow safely and securely."

Further applications from a range of other spaceports and operators are being considered.

A consultation began recently on a proposed launch in Scotland, where a launch pad is due to come online in 2023.

Until now, the UK has never hosted a space launch. The country has only ever completed one orbital launch, the Black Arrow in 1971, and that actually took off in Australia. 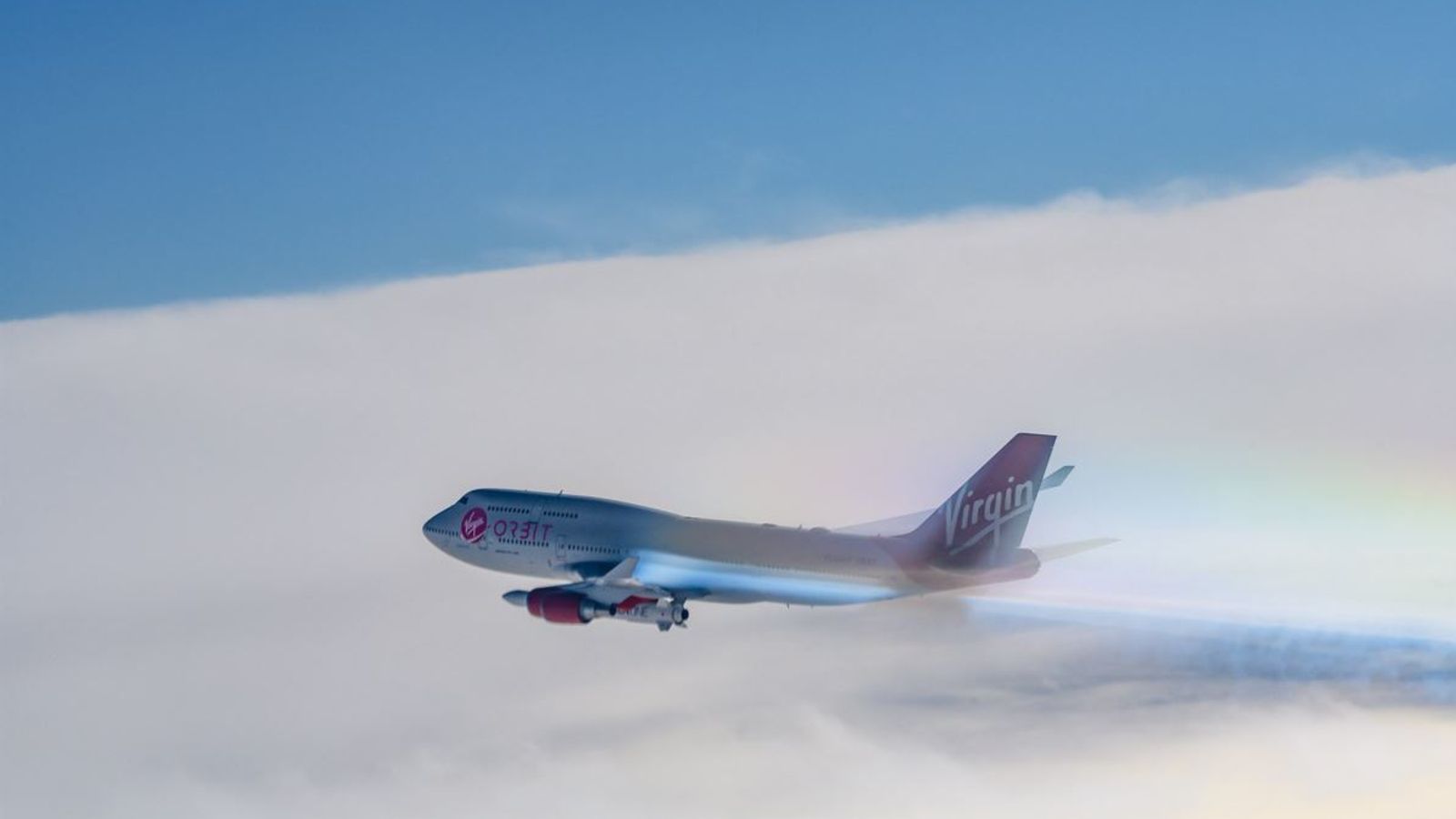 The jumbo jet's seats have been ripped out. Pic: Virgin Orbit

When will we see the first UK launch?

Cosmic Girl's launch has been expected to come within weeks, although it will look a little different to the lift-offs we are used to from the likes of NASA.

While the likes of Artemis are vertical launches, Cosmic Girl will be horizontal - and so it won't look dissimilar to a standard plane take-off.

It means the launch is far less weather-dependent and does not require as much ground infrastructure.

Operator Virgin Orbit got the aircraft ready at its factory in California, ripping out the seats, and converting the upper deck into a control centre for launch engineers.

Under its left wing is LauncherOne, a 21m (69ft) rocket which will be released at 35,000ft over the Atlantic Ocean before accelerating to 8,000mph on its mission to deploy seven satellites into orbit.

It forms part of the government's National Space Strategy, which set out how the UK will become the first country in Europe to launch satellites into orbit in 2022.