Energy companies will be hit with a cap on profits to raise €140 billion to help struggling consumers with rocketing bills, under plans for a sweeping overhaul of EU power markets that are “no longer fit for purpose,” Ursula von der Leyen said on Wednesday.

In an annual State of the Union speech dominated by the war in Ukraine — the European Commission president even wore an outfit to match the country’s blue and yellow flag — von der Leyen promised “comprehensive reform” of the bloc’s electricity market, and a new task force to examine how to cap the price of gas.

Those are calls the EU leader has made before, but there’s a growing sense that keeping energy prices down is key to the EU’s long-term ability to continue supporting Ukraine in its existential fight with Russia.

Von der Leyen also suggested rewriting the European Union’s founding treaties to shake up the way the bloc’s leaders make decisions, an idea bound to cause arguments, especially in countries like Poland, where the effort will be seen as a Brussels bid to impose rules on the nationalist government.

Von der Leyen’s blueprint is designed to help the EU weather the storm of rocketing inflation, runaway power prices and a war on its borders that she said is putting the future of democracy at risk.

“We will be tested — tested by those who want to exploit any kind of division between us,” von der Leyen told members of the European Parliament in Strasbourg. The bloc is facing not just a security threat from Russia’s invasion of Ukraine, but a broader war, she said.

The wide-ranging annual address is a chance for the Commission president to set out her legislative and political priorities for the year ahead. This time, there was one big preoccupation: how to respond to the crisis triggered by Russia’s invasion of Ukraine.

First, von der Leyen offered deeper economic support for Ukraine itself. While she stopped short of major new pledges on funding supplies of weapons or hitting Russia with more sanctions, she said she would work to open up the EU’s single market to give Ukraine “seamless access.”

“Today, I am going to Kyiv to discuss all this with President Zelenskyy,” she said, as the Ukrainian leader’s wife Olena Zelenska listened as a guest of honor in the Parliament chamber.

The most urgent part of von der Leyen’s address focused on the energy crisis now gripping the EU. The electricity market is “not fit for purpose anymore,” she said.

Von der Leyen said the bloc must decouple gas prices from the cost of electricity — currently, the EU’s pricing structure ties all power costs to the price of gas, a move meant to encourage more sustainable energy use. 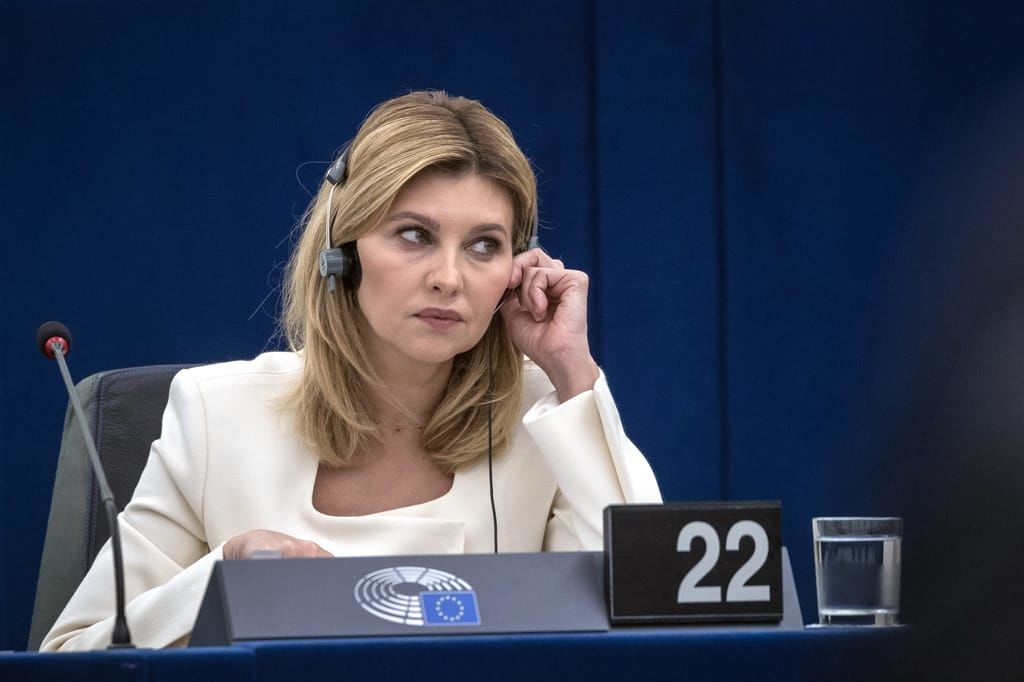 But after the war threw the energy market into disarray, countries like Spain started calling for the EU to decouple the link between gas and electricity pricing. Until this summer, though, the idea was given short shrift from Brussels.

“Consumers should reap the benefits of lower-cost renewables,” she said.

A levy on soaring profits for utilities generating power from low-cost sources and from fossil fuel companies will raise €140 billion to help families across the bloc who face impossibly high bills, she said.

“In these times it is wrong to receive extraordinary record profits benefitting from war and on the back of consumers,” she said.

The EU will continue cutting its reliance on Russian energy by relying on gas suppliers like Norway and the U.S. and beefing up its gas storage.

“Russia keeps on actively manipulating our energy market … This market is not functioning anymore,” she said.

— A relief package for small family businesses, including rewriting late payment rules so firms don’t go bust because invoices have not been paid

— A Critical Raw Materials Act, to help the bloc develop an industry for minerals used in electric vehicle batteries, for example

— A pledge to fight for democracy, taking on internal EU threats to rule of law standards. A new Defense of Democracy Act will be published

— A call for a new European Convention, a gathering that would mark a step toward changing the bloc’s founding treaties to overhaul decision-making.