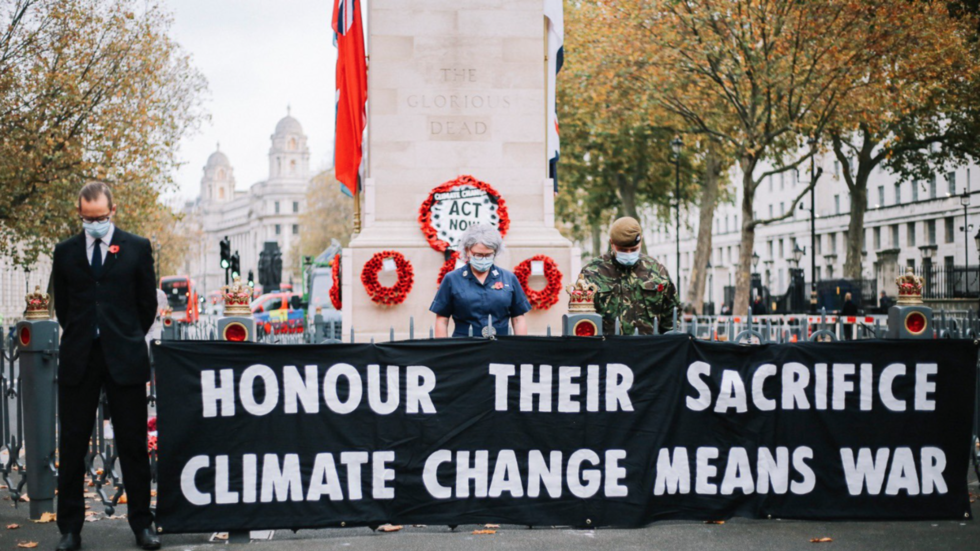 ‘Slap in the face to ALL veterans’: Extinction Rebellion blasted for Cenotaph climate protest on Remembrance Day (VIDEO)

Members of climate change activist group Extinction Rebellion (XR) have been strongly criticized online for using the Cenotaph memorial for British war dead as a platform for their latest protest.

British Veteran and XR member Donald Bell, 64, who led the protest at Whitehall, central London, at 8am local time, reportedly held a two-minute silence before laying a wreath and unfurling a banner with the message “climate change means war, act now.”

“I took action today knowing that I would be criticised. I knew that I would be accused of being disrespectful and hated by many for speaking out in this way,” Bell said, in anticipation of massive backlash amid somber Remembrance Day observances.

“Unchecked climate change means a return to a world at war. I cannot stand by and let that happen. It is my duty to act.”

It didn’t take long for the nation’s ire to spill over on social media, with some branding Bell, who completed four tours in Northern Ireland, and the protest as a “national disgrace," and a “slap in the face to all veterans.”

Many argued that, while clearly chosen to elicit strong responses, Remembrance Day is not the time, and the Cenotaph is not the place for such climate activism. Some even questioned whether people in XR’s leadership are plants, actively working to discredit the organization and turn the public against it.

I completely support defending our planet etc. I have tried to defend your repeatedly short sighted actions but FFS.
For inspiration look to Banksy etc. Be clever not childish. Don't target the public with inconvenience and unthinking offence.
Inspire.
This isn't working.

Hijacking a solemn occasion to subvert its meaning for the sample of a tawdry political point. #XR really are the dregs of society.#Extinction #Rebellion stages climate change protest at #Cenotaph on #Remembrance Day - Evening Standard https://t.co/BzFpippO6G

In contrast, others argued that the protest appeared sufficiently respectful and thought-out.

There is apparently "fury" at this XR protest at the Cenotaph, but to me it looks carefully thought out and deeply respectful, while making a perfectly valid point about avoiding war and the kind of slaughter that took place in WW1. https://t.co/5leqt1zaKm

The eco warrior group said in an online statement that the protest was designed to highlight the parallels between rising global temperatures and an increase in armed conflict, citing research commissioned by the Ministry of Defence (MOD).

In a June report, the MOD concluded that “climate change may aggravate existing threats to international peace and security.”