Following a million-dollar donation by the department store to the rockstar’s Aids Foundation’s Rocket Fund, Sir Elton decided to show his gratitude and serenade members of the public who had turned up to watch the famous big reveal.

Stopping traffic on 49th Street, a grand piano was rolled into the middle of Fifth Avenue as the hall-of-famer prepared to take his seat.

Following some quick words from Saks CEO Marc J Metrick, the megastar took time to share his feelings with the crowd: ‘It means a great deal to me to have your support.

‘Thank you so much. I’m so thrilled to kick off the holiday season tonight and to be a part of this spectacular and iconic window unveiling and light show.’

Nodding an all clear, the singer’s husband then ushered their children Zachary, 11, and Elijah, nine, onto the stage to join in the festive celebrations. 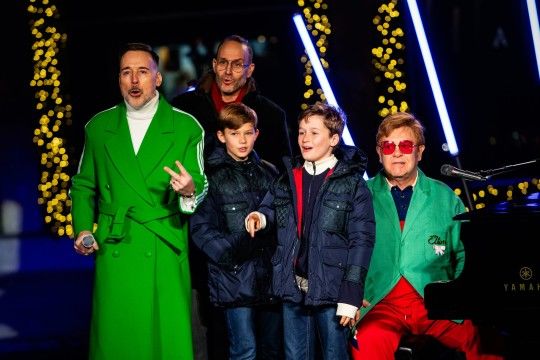 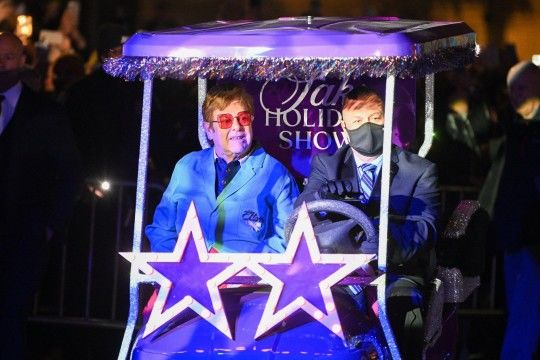 The star pitched up in an extravagant golf cart to his waiting piano
A full family affair, the foursome counted down to their loved one’s big performance of his Billboard Hot 100 single Your Song.

After his performance was met with an enormous round of applause, the veteran performer joined the rest of his family in a seated section of the crowd to watch the lights show put on by the iconic shop.

The festive season extravaganza included an homage to the Tiny Dancer singer as it displayed rocket ships that projected on the side of the building’s façade. 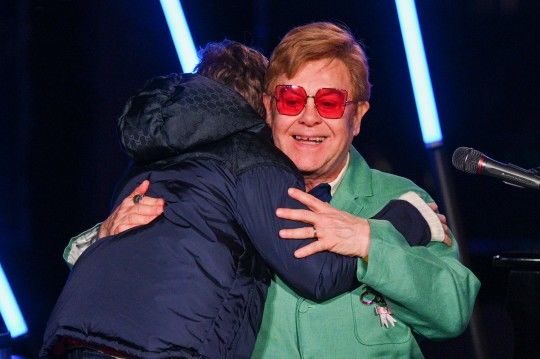 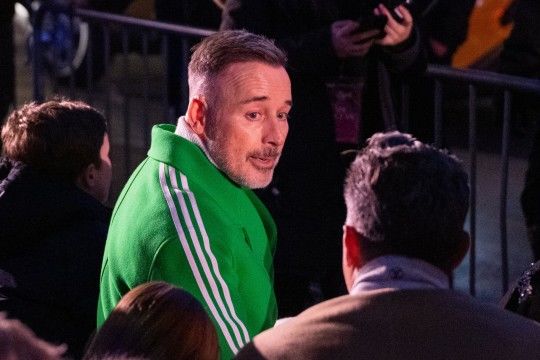 Accompanying the fantastical showcase was a melody of Sir Elton’s hits that had the man himself bobbing along as he got into the spirit of things.

The light display was upstaged by a later explosion of fireworks that danced across the New York sky to the tune of Your Song, this time a pre-recorded version.

A full-circle moment, the song was influential in the artist’s early career and saved him from a lifetime of struggle – a fact that was shared in the star’s memoir Me.

Fifty years later, the icon watched on as it acted as an anthem for one of the world’s most iconic seasonal events that shut down roads in the middle of New York City.