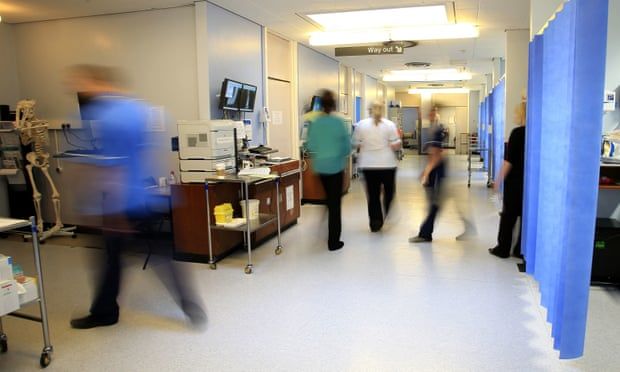 Shortfall of 50,000 doctors may overwhelm NHS in winter, BMA warns

Number of medics in England fell further behind comparable EU countries over summer, as more consider quitting due to burnout

The NHS may be unable to cope this winter because of a “frightening” shortfall of more than 50,000 doctors, the head of the British Medical Association has warned.

The number of medics in England has fallen further behind comparable European countries over the summer, ahead of what is predicted to be one of the worst winters in the 73-year history of the health service, Dr Chaand Nagpaul said.

“Winter is an incredibly difficult time for the health service,” he said. “With flu season on the horizon and even fewer staff this time round, it’s a total unknown as to how well our services will cope – if they even cope at all.”

England has a much lower doctor to population ratio than comparable EU countries, with just 2.8 doctors per 1,000 people, in comparison with an EU average of 3.7, according to the BMA. Its research in July said that meeting this average would mean scaling up by 31% – or an additional 49,162 full-time equivalent (FTE) doctors.

With more GPs and hospital doctors quitting over the summer, the shortage has risen to 50,191, according to the BMA. This reflects a loss of 919 doctors in primary care and 110 in secondary care over the last two months.

Yet more doctors are actively considering quitting in the coming months due to burnout and excessive workloads. “Alarm bells” should be ringing, Dr Nagpaul said.

“It’s frightening to see that the gap between the number of doctors in England and comparable EU nations is widening at such pace,” said Dr Nagpaul. “For those still working in the NHS, who knows how long we’ve got them for.

“Rather than actively retaining staff, government has stood by as doctors work themselves to the point of exhaustion, with many now considering leaving the NHS, further depleting us of expert, talented colleagues.”

The workforce crisis means staff are working longer hours to keep up with patient demand. Some feel they have no choice but to hand in their notice to get the respite they need. This piles pressure on those that remain, Dr Nagpaul said.

Last week, Prof Martin Marshall, the chair of the Royal College of General Practitioners, told the Guardian that GPs in England are “finding it increasingly hard to guarantee safe care” for millions of patients, because the shortage of medics means they are unable to cope with soaring demand.

Dr Nagpaul also expressed concerns about how far the additional funding for the NHS and social care, announced last week, will stretch, as the health service continues to deal with the pandemic and a backlog of cases.

The government plans to raise £12bn extra a year for the NHS and adult social care, partly through a rise in national insurance next spring. The NHS will get most of the share for the first three years, with £5.3bn allocated to social care, £500m of which will be spent on workforce training and recruitment.

Ministers said social care will get more money after this window, when the £86,000 cap on costs – which comes into force in October 2023 – starts to require funding.

But Dr Nagpaul said that, despite the funding announcements, “the BMA estimates that core health spending is still £10bn short”.

The BMA is also calling for extra funding for more medical school, foundation programme and specialty training places, alongside investment in the staff and infrastructure needed to deliver this.

A Department of Health and Social Care spokesperson said: “We have backed the health service at every turn, with an extra £29bn to support health and care services on top of our historic settlement for the NHS in 2018. This will see the NHS budget rise by £33.9bn by 2023/24.

“At the same time, we are backing the NHS with a further £36bn for health and social care and a ring-fenced £8bn to tackle backlogs and help the NHS deliver an extra nine million checks, scans and operations for patients across the country.”
Add Comment