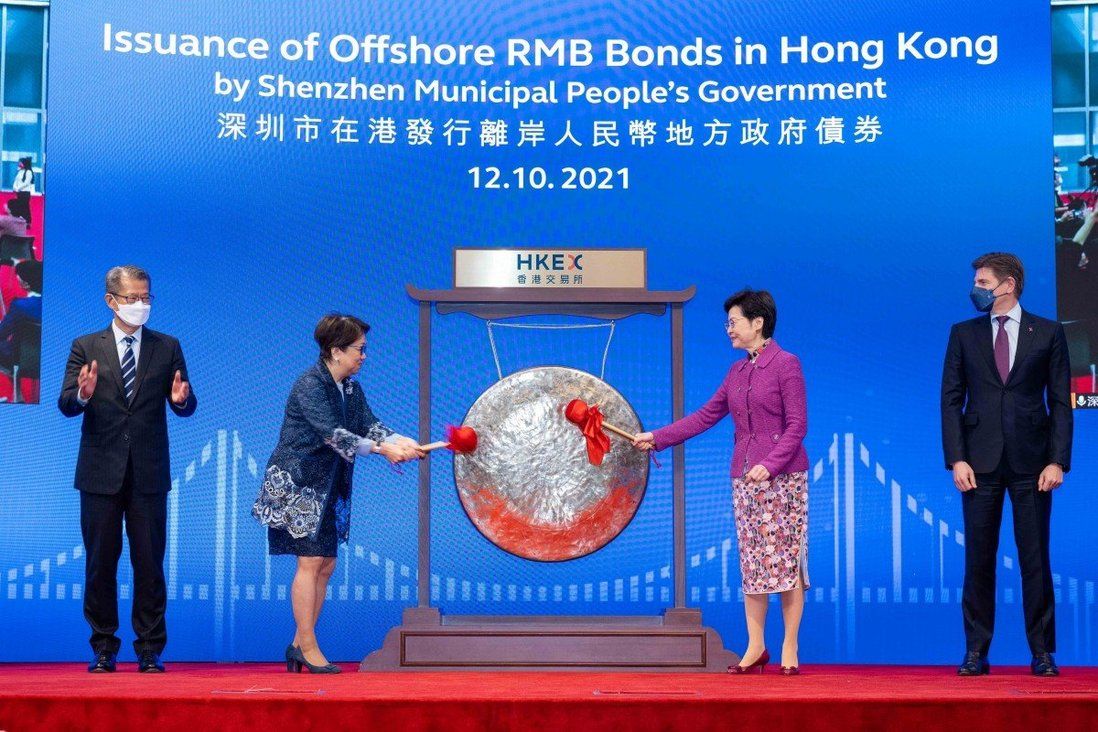 Shenzhen becomes the first mainland Chinese local government to sell offshore debt in Hong Kong in what officials say is as a boost to the latter’s credentials as a finance hub.

The offering, which has tenures of two, three and five years, was oversubscribed by 2.5 times, attracting 17.4 billion yuan in orders from 89 global governments, insurers and pension funds, according to an announcement by the Shenzhen municipal government.

Hosting a ceremony to mark the occasion, Hong Kong Chief Executive Carrie Lam Cheng Yuet-ngor hailed it as a boost to the city’s credentials as a finance hub.

“This is the first time a mainland municipal government has issued a yuan-denominated bond in Hong Kong for international investors to trade. It will enhance Hong Kong’s role as an international financial centre and as an offshore yuan trading centre,” said Lam.

Investors bid for the offshore yuan-denominated debt, also known as a dim sum bond, via tender through a mechanism run by the Hong Kong Monetary Authority (HKMA) called the Central Moneymarkets Unit (CMU).

“The offering marks closer cooperation between Hong Kong and Shenzhen. It also allow HKMA’s CMU to serve and support the issuing of bonds by mainland issuers,” said Eddie Yue Wai-man, chief executive of HKMA at the same event.

Lam, Yue and other officials gathered at the former trading hall of the bourse operator Hong Kong Exchanges and Clearing (HKEX) at lunch time for the customary sounding of a ceremonial gong to mark the bond issuance. Shenzhen mayor Qin Weizhong and other leaders hosted a simultaneous bell-ringing ceremony at the Shenzhen Stock Exchange.

The notes with maturities of three and five years are green bonds, meaning their proceeds must be used to fund projects related to environmental protection. Qin said the 5 billion yuan raised from the offering will be used for building schools, transport facilities and flood-control projects.

“The offering includes green bonds that will help Hong Kong to develop as a green finance centre,” said Laura Cha Shih May-lung, chairwoman of the HKEX at the same ceremony.

It is the first major bond offering in Hong Kong since Beijing gave the go-ahead for the southbound leg of the Bond Connect scheme to start trading on September 24, allowing mainland-based professional investors to trade in the HK$2 trillion (US$257 billion) bond market in Hong Kong.

The northbound route of the scheme that enables international investors to trade in the mainland Chinese bond market was launched in 2017.

“Shenzhen municipal government’s bond offering in Hong Kong marks a further opening up of China’s bond markets to international investors. It came shortly after the introduction of the southbound Bond Connect,” said Pan Gongsheng, deputy governor of the People’s Bank of China via a video shown at the ceremony.

The successful launch of the bond is likely to attract other cities to follow suit, said Christopher Cheung Wah-fung, a lawmaker representing the financial services sector in Hong Kong, who is also the chief executive of Christfund Securities.

Shenzhen is the richest of nine cities in southern Guangdong province that, together with Hong Kong and Macau, make up a US$1.65 trillion economic cluster under China’s Greater Bay Area initiative.

Hong Kong’s stock market has cross-border trading schemes with the stock exchanges in Shenzhen and Shanghai.

Cheng said these, together with the new Wealth Management Connect scheme that allows cross-border trading of investment products, will further encourage capital flows and integration between Hong Kong and the bay area.