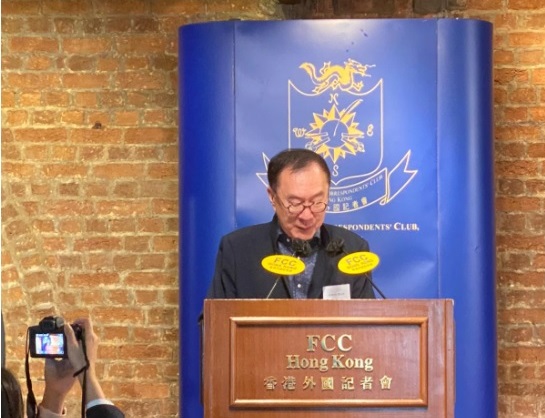 The enactment of the national security law last year “should never have been necessary” if Hong Kong governments and lawmakers over the past 17 years had managed to enact Article 23, senior counsel Cheng Huan said.

Speaking at the Foreign Correspondents’ Club on Tuesday, Cheng said the national security law enacted by the central government is "much more burdensome, more sweeping in its power" than the abandoned Article 23 bill in 2003.

Cheng expressed his disappointment that post-1997 governments and lawmakers did not legislate the Basic Law's Article 23, even when he urged that it should be enacted as soon as possible.

“If Hong Kong is again negligent in its duty, we should not be surprised if the central government again intervenes. It is essential that Hong Kong honors its duty under the Basic Law.”

Cheng said that former chief executive Tung Chee-hwa and his administration were required by the mini-constitution to introduce Article 23, and had dispatched the National Security (Legislative Provisions) Bill to the Legislative Council for debate in February 2003.

The bill covered acts of treason, secession, sedition, subversion and the protection of state secrets. But it led to public opposition and a protest rally of more than 500,000 people on July 1 that year.

After Tung’s administration, there were no further attempts to introduce the controversial anti-sedition law in Hong Kong until now.

Because of that failure, he said "Hong Kong has now a national security law imposed from above," referring to Beijing. "This should never have been necessary.”

Cheng, a former deputy district court judge, said “There was next to no input by Hong Kong as [to] how the 2020 [national security] law was to be enacted. The law’s contents did not pass through the legislative scrutiny that all local legislation must go through.

“I very much hope this mistake will never be repeated and I hope Hong Kong can enact Article 23 as soon as possible to complete the legal jigsaw.”

He gave, as an example, the sweeping powers of the national security law. It has no restriction by way of either nationality, or the location where an offense is committed, unlike the 2003 bill which mainly regulated Chinese nationals.

Cheng said he hopes the next and last element to the unfolding of national security legislation will be Article 23.

He said the current national security law does not cover all offenses spelled out in Article 23, such as treason and a ban on foreign political organizations or bodies from conducting political activities in the city.

Cheng said the security situation of Hong Kong in 2019 was becoming potentially calamitous, and this broke the mainland’s patience so the law was imposed to restore order.

“The alternative would have taken Hong Kong down a dead-end road of increasing turmoil and -- most probably -- the application of Article 18 of the Basic Law.

"The use of Article 18 would have suspended, and perhaps abolished the one country, two systems and extended mainland law to Hong Kong jurisdiction."
Add Comment