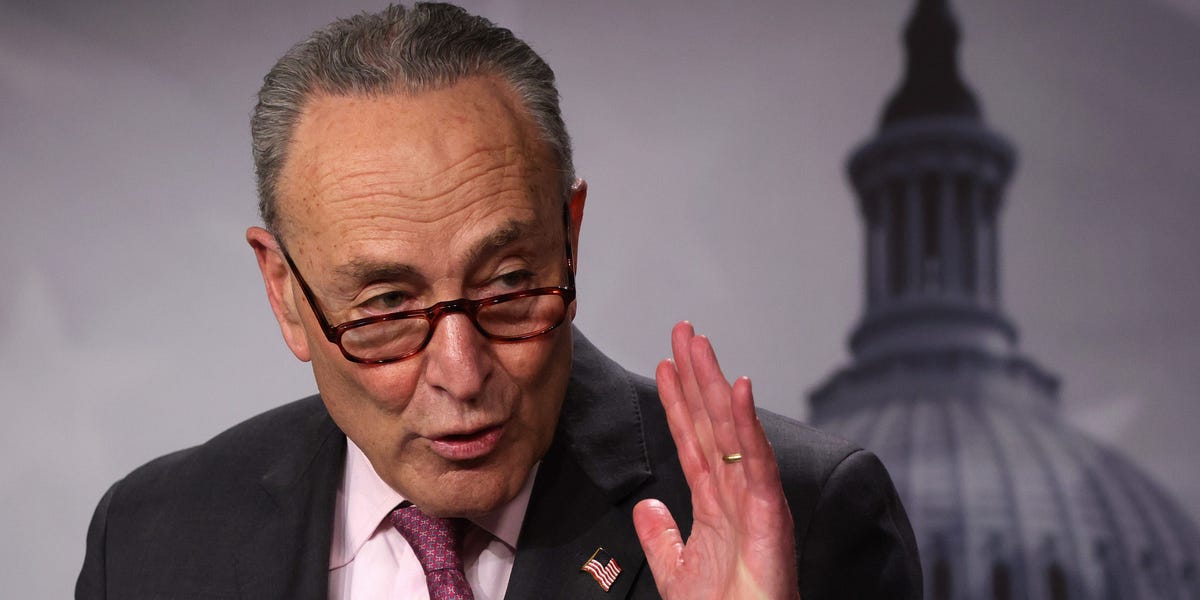 "I want to make my arguments to him, as many other advocates will," Schumer told Politico. "But at some point we're going to move forward, period."

Democratic Senate Majority Leader Chuck Schumer of New York said in an interview with Politico that his caucus will advance with federal marijuana legalization, regardless of President Joe Biden's ultimate position on the issue.

Schumer, who first introduced a marijuana legalization bill in 2018, said in the interview that he was crafting new legislation with Sens. Cory Booker of New Jersey and Ron Wyden of Oregon.

Biden, who has been less eager to fully push for federal legalization in the past and has recently drawn criticism for his administration instructing several staffers to resign or work remotely due to their past drug use, continues to "study" the issue, Schumer told the outlet.

"I want to make my arguments to him, as many other advocates will," Schumer said. "But at some point we're going to move forward, period."

This week, Schumer's home state legalized marijuana use among adults 21 years of age and older for the first time after years of legislative roadblocks.

He pointed to states that have long legalized marijuana as reasons to back a federal bill.

"The legalization of states worked out remarkably well," he said. "They were a great success. The parade of horribles never came about, and people got more freedom."

GOP Senate Minority Leader Mitch McConnell of Kentucky has adamantly opposed marijuana legalization, but Schumer is pledging to work with Senate Republicans and wavering Democrats on the issue.

"What we want to do is first introduce our comprehensive bill, and then start sitting down with people who are not for this in both parties, and A) try to educate them, B) see what their objections are, and if they have some modifications that don't interfere with the main thrust of the bill," he said. "We'd certainly listen to some suggestions if that'll bring more people on board."

McConnell's influence over his GOP caucus may not be the biggest obstacle for federal legislation, though.

Biden has said in the past that there was not enough evidence to indicate whether marijuana was a gateway drug.

"It's a debate, and I want a lot more before I legalize it nationally," Biden said during a 2019 town hall event. "I want to make sure we know a lot more about the science behind it."

Last December, the House passed a bill legalizing marijuana at the federal level, the first time either chamber of Congress had voted on such a measure.

When asked about Biden potentially vetoing a legalization bill, Schumer said that the president is continuing to examine his stance surrounding the matter.

"Well, he said he'd like to see more information on the issue," he said. "I respect that. I certainly will have an ongoing conversation with him, and tell him how my views evolved. And hope that his will to."