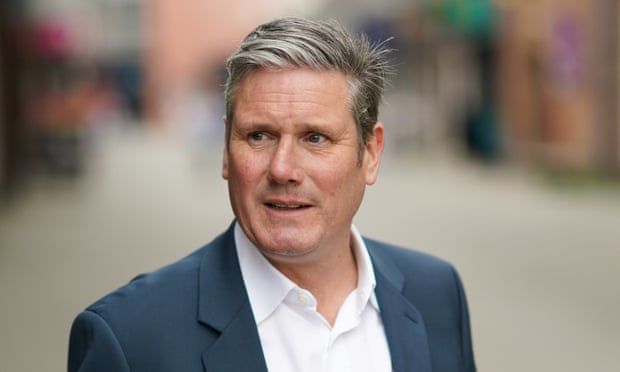 Boris Johnson has been rendered “incapable of governing” by a series of scandals and rows that have left him unable or unwilling to tackle the cost of living crisis, Keir Starmer has warned.

In a final pitch before Thursday’s local elections, the Labour leader said that voters were hearing “the dying groans of a clapped-out government” that was attempting to use “desperate attacks and deflections” to distract from inaction over rising bills and tax increases.

Writing in the Observer, Starmer said that the government’s decision to press ahead with an increase in national insurance in April was a policy of “profound stupidity and short-sightedness” that was coming at precisely the wrong time. He also launched a personal attack on both Johnson and the chancellor, Rishi Sunak.

“During this election campaign, I have been asked time and time again why the government seems so reluctant, so slow, so timid in its response to the issues facing the country,” he writes. “Spending their time defending the indefensible, creating absurd distractions and squabbling among themselves has left them no space to get on with the jobs they were elected to do. It has rendered them incapable of governing.

“We have seen the miserable spectacle of a billionaire chancellor – mired in allegations about his family tax affairs and whether he is profiting from businesses operating out of Russia – declaring that taking action to reduce people’s energy bills would be ‘silly’. We have heard the prime minister talk about being tough on crime while facing allegations that his party ignored calls from the victim of a Tory MP now convicted of paedophilia. This madness cannot go on.”

Sunak has been highly critical of attacks on his wife, Akshata Murthy, who said she would pay all UK tax on foreign earnings in future after it emerged she had non-dom tax status. She also has a stake in her father’s IT firm, Infosys. The company said last month it was withdrawing from Russia.

In a bid to win back lost voters who backed leave, Starmer signalled the party’s attempts to move away from the rows over EU membership. He said that the government’s refusal to cut VAT from household energy bills meant they had missed “a genuine Brexit benefit the whole country can get behind”.

He accused the Conservatives of wasting police time over their accusation that he had breached lockdown rules when he had a takeaway and a beer with staff in a Durham constituency office while working on a byelection. “In the absence of any idea about where the country is going, what they want to achieve, or how they are going to improve people’s lives, the Tories have resorted to desperate attacks and deflections,” he writes. “Because they have nothing else to say. The sound you can hear is the dying groans of a clapped-out government.”

Labour activists have been trying to dampen down expectations that Labour could take the flagship Tory council of Wandsworth on Thursday, but are more confident of making progress in Barnet. Party sources say that it will struggle to win control of many councils because the council seats last came up in 2018, when Labour had a strong result. Some are also braced for council seat losses in areas where the party lost ground to the Tories at the last general election. However, they are hoping to show how Labour’s vote is growing since 2019, with plans to map Thursday’s result on to key battleground seats for the next general election.

Starmer said that the national insurance rise was “both a betrayal of the promises he made to the British public at the last election and one of the most self-defeating, damaging decisions a prime minister has taken in recent times”. He again called for energy companies to be made to help with rising bills: “When the cabinet finally got round to having a meeting about the issues this week the big idea that emerged was some nonsense about having fewer MOTs. It would be laughable if it wasn’t so tragic.

“On the thinning benches of MPs behind him, I sense something altogether more profound: the dawning realisation that the game is up.”

Late on Saturday, Johnson hit back, saying that the choice was between “Labour and Lib Dems, who fritter away your council tax on deciding which statues to tear down, or Conservatives, delivering value for money and delivering on your local priorities”. He accused Labour councils of increasing council tax.

“It’s Conservative councils who charge the lowest council tax anywhere in the country, on top of our £150 council tax rebate for over 20 million households this month,” he said. “Whereas in my old stomping ground of London, the poor residents of Kingston are being charged the highest council tax in the capital by the profligate Lib Dems. And pity the good people of Croydon, where Labour have bankrupted the council.”
#boris johnson  #johnson
Add Comment