Iran football fans use the Iran-England match to raise their voices in support of those protesting in their country.

Chants of “Say her name, Mahsa Amini,” reverberated among protesters outside Khalifa International Stadium ahead of Iran’s first match of the World Cup 2022 against England.

Protests have been taking place across Iran since mid-September after the death in custody of Amini, a 22-year-old woman from Iran’s Kurdistan province. Amini was arrested by the country’s morality police in the capital Tehran for allegedly not adhering to Iran’s dress code for women.

In the past few days, protests have been most intense in northwestern Kurdish-majority provinces, with videos continuing to come out from several cities, including Mahabad, Bukan and Piranshahr in West Azerbaijan and Javanrud in Kermanshah. 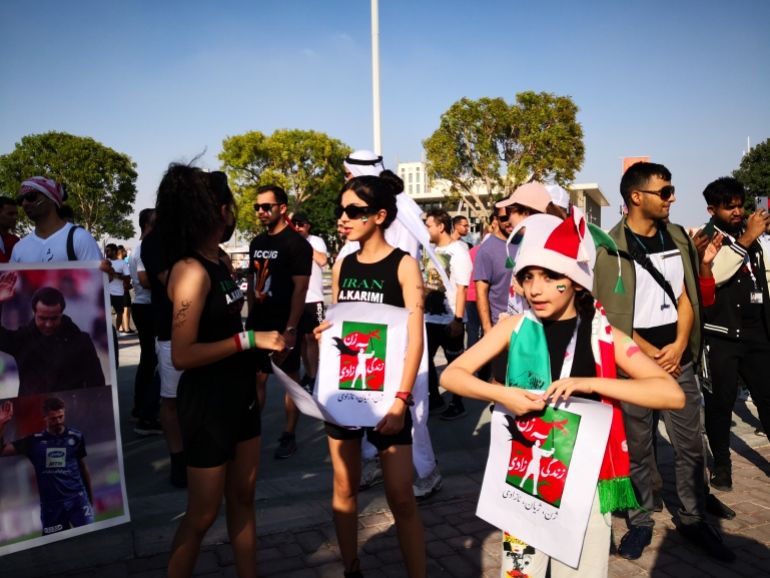 The Iran protests in Qatar
“My people in Iran are under a lot of pressure and are being killed by the regime, so we want to use this opportunity to raise a voice for them,” Mahmoud Izadi, one of the protest organisers, told Al Jazeera in Qatar’s capital Doha.

The protests started off with claps and chants of “Iran” but soon turned political as a charged-up crowd started waving banners with Amini’s picture on them.

Dressed all in black to register his protest, Izadi said the demonstrators want the world to pay attention to the situation in Iran and are using the World Cup as a platform because their voices are being crushed in their home country.

Once those protesters went quiet, a group of men in Iran football shirts began shouting in support of the team.

“People who are dancing and cheering for Iran have been sent here by the regime to paint a different picture,” Izadi said, adding that he was not there to support the team “because they are not supporting our people”. 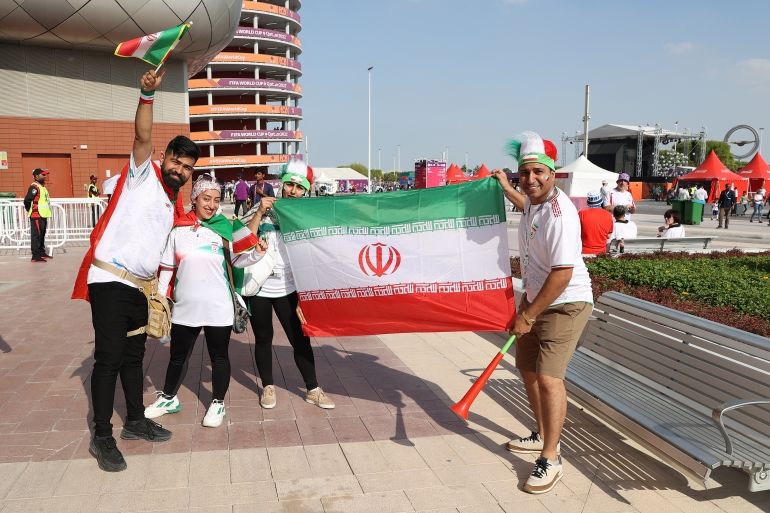 The most vocal protesters seem to be those who have travelled to Qatar from places other than Iran.

Others, who seemed to be based in Iran or will travel there, were simply clapping from the sidelines and steered away from any attention.

A few families and women turned down requests for a comment, saying they wanted to stay away from trouble back home.

Hasti, an Iranian-born American here to watch Iran’s matches, said she does not think a sports tournament is necessarily the best place to register a protest but there are not many options left for the people of her country.

“We are going to use whatever platform we can get to raise the issue and this may not help the people in Iran directly but it will help show the world what’s happening there.”

Amidst the chants, a group of people held up a poster of former Iran footballer Ali Karimi who has been supporting the protests.

Karimi left the country soon after the protests broke out in Iran.

“The regime was after his life and he has been on the run since then,” said Izadi.

Abi Shams, donning a green t-shirt that says “Help free Iran,” has flown in from the US and says his choice of outfit is aimed at attracting attention.

“What we have in Iran is a dictatorship and we, the protesters, are the voice of the Iranian people,” he said.

As the crowd built up outside the stadium entrance, people started making their way through the turnstiles. The protesters, however, stayed behind for one last round of chanting and clapping and say they do not plan on stopping anytime soon.

“We have reached a point of no return and will no longer be suppressed by the regime,” said Izadi, before joining a chant of “zan, zindagi, azadi”.