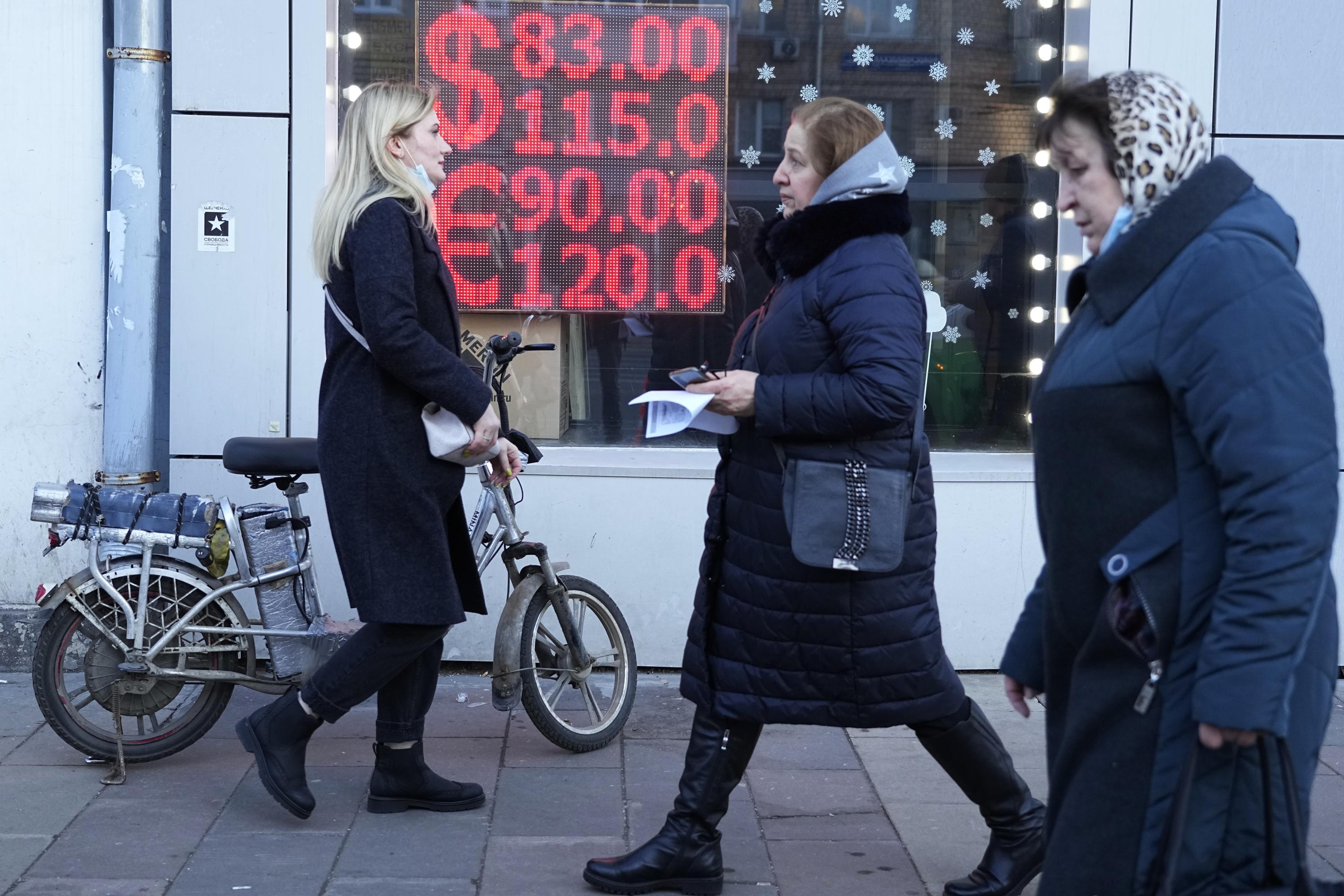 Nearly two months into the Russian-Ukraine war, the Kremlin has taken extraordinary steps to blunt an economic counteroffensive from the West. While Russia can claim some symbolic victories, the full impact of Western sanctions is starting to be felt in very real ways.

As the West moved to cut off Russia’s access to its foreign reserves, limit imports of key technologies and take other restrictive actions, the Kremlin launched some drastic measures to protect the economy. Those included hiking interest rates to as high as 20%, instituting capital controls and forcing Russian business to convert their profits into rubles.

As a result, the value of the ruble has recovered after an initial plunge, and last week the central bank reversed part of its interest rate increase. Russian President Vladimir Putin felt emboldened and proclaimed — evoking World War II imagery — that the country had withstood the West’s “blitz” of sanctions.

“The government wants to paint a picture that things are not as bad as they actually are,” said Michael Alexeev, an economics professor at Indiana University who has studied Russia’s economy in its transition after the collapse of the Soviet Union.

A closer look, however, shows that the sanctions are taking a bite out of Russia’s economy:

— The country is enduring its worst bout of inflation in two decades. Rosstat, the state’s economic statistics agency, said inflation last month hit 17.3%, the highest level since 2002. By comparison, the International Monetary Fund expects consumer prices in developing countries to rise 8.7% this year, up from 5.9% last year.

— Some Russian companies have been forced to shut down. Several reports say a tank manufacturer had to stop production due to a lack of parts. U.S. officials point to the closing of Lada auto plants — a brand made by the Russian company Avtovaz and majority-owned by French automaker Renault — as a sign of sanctions having an effect.

— Moscow’s mayor says the city is looking at 200,000 job losses from foreign companies shutting down operations. More than 300 companies have pulled out, and international supply chains have largely shut down after container company Maersk, UPS, DHL and other transportation firms exited Russia.

— Russia is facing a historic default on its bonds, which will likely freeze the country out of the debt markets for years.

Meanwhile, Treasury officials and most economists urge patience, saying that sanctions take months to have their full effect. If Russia can’t get appropriate amounts of capital, parts or supplies over time, that will cause even more factories and businesses to shut down, leading to higher unemployment.

It took nearly an entire year after Russia was sanctioned for seizing Ukraine’s Crimea peninsula in 2014 for its economic data to show signs of distress, such as higher inflation, a decline in industrial production and a slowdown in economic growth.

“The things that we should be looking for to see if the sanctions are working are, frankly, not easy to see yet,” said David Feldman, a professor of economics at William & Mary in Virginia. “We’ll be looking for the price of goods, the quantity of goods they are producing and the quality of goods. The last being the hardest to see and probably the last to appear.”

Transparency into how sanctions are affecting the Russian economy is limited, largely because of the extraordinary lengths the Kremlin has taken to prop it up. In addition, its largest sector — oil and gas — is largely unencumbered due to European, Chinese and Indian reliance on Russian energy.

Benjamin Hilgenstock and Elina Ribakova, economists with the Institute of International Finance, estimated in a report released last month that if the European Union, Britain and the U.S. were to ban Russian oil and natural gas, the Russian economy could contract more than 20% this year. Current projections forecast a 15% contraction.

While the EU has agreed to ban Russian coal by August and is discussing sanctions on oil, there’s been no consensus among its 27 nations so far about halting oil and natural gas. The European Union is far more reliant on Russian supplies than Britain and the U.S., which have banned or are phasing out Russian oil. In the meantime, Russia gets $850 million a day from Europe for its oil and gas.

The U.S. and its allies have argued that they have tried to tailor sanctions to affect Russia’s ability to wage war and financially hit those in the highest echelons of government, while leaving everyday Russians largely unaffected.

But Russians have noticed a spike in prices. Residents of one Moscow suburb said 19-liter jugs of drinking water they regularly order have become nearly 35% more expensive than before. In supermarkets and stores in their area, the price for 1 kilogram (2.2 pounds) of sugar has risen 77%; some vegetables cost 30% to 50% more.

Local news sites in different Russian regions in recent weeks have reported that multiple stores are shuttered in malls after Western companies and brands halted operations or pulled out of Russia, including Starbucks, McDonald’s and Apple.

The Kremlin and its allies on social media have repeatedly pointed to the recovery of Russia’s ruble as a sign that Western sanctions aren’t working. The ruble crashed to around 150 to the dollar in the early days of the war but recovered to around 80 to the dollar, about where it was before the invasion. A gauge of weekly inflation by Rosstat has shown inflation slowing, but that is not surprising after the central bank raised interest rates as quickly as it did.

Russia’s central bank had doubled its benchmark interest rate to support the ruble’s plunging value and stop bank runs. It dropped the rate to 17% from 20% this month and signaled it might lower it further.

This isn’t the first time Russia has thrown its full force behind defending the ruble’s value as a symbol of resistance against the West. Throughout the 1970s and ’80s, the Soviet Union had an official exchange rate of one ruble equaling about $1.35, whereas the black-market exchange rate was closer to four rubles to the dollar. The Russian debt crisis of the late 1990s also was caused partially by the Kremlin’s active defense of the currency’s value.

U.S. Treasury officials have dismissed the significance of the ruble’s recovery.

“The Russian economy is really reeling from the sanctions that we put in place,” Treasury Secretary Janet Yellen said, adding that the ruble’s value has been artificially inflated by central bank intervention.

If and how Russia wins the economic war will come down to whether the Kremlin can drive division in the West, causing the sanctions to become patchy and less effective. At the same time, Russia will have time to develop alternatives for goods it can no longer access, a concept known as import substitution.

Looking back at the 2014 sanctions, the Congressional Research Service said in January that the impact on Russia was modest only because the U.S. effectively acted alone. This time, there are multiple international actors.

But Alexeev, the Indiana University professor, sees one glaring gap.

“As long as Russia can continue to sell oil and gas, they will muddle through this,” he said.

Oh ya 24 days ago
Well let's just wait and see who has bread to eat and fertilizer to put on the crops. Go to your grocery store in America if you want to see empty shelves, photos all over the net and news. US Government says inflation is 8.5% but go to shadowstatsdotcom and see when you figure it out like they did in 1980 it is close to 20%. Just another hit piece by the bought and paid for MSM
View all comments (1)Add comment