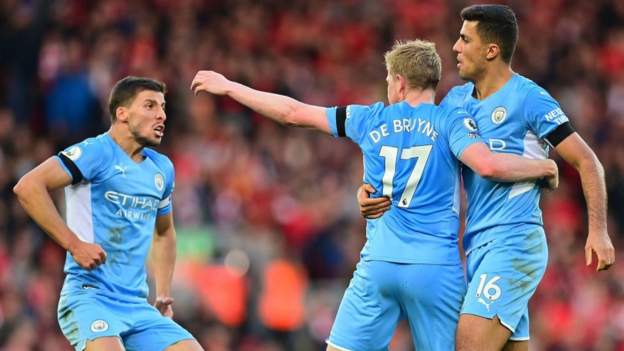 Reigning champions City and Jurgen Klopp's Liverpool were each hoping to take over from Chelsea at the top of the table, but this result means Thomas Tuchel's side stay clear at the Premier League summit.

City dominated the first half but wasted a host of chances and were punished when Sadio Mane was the beneficiary of more Salah brilliance to apply a clinical finish to put Liverpool ahead after 59 minutes.

Liverpool's lead lasted just 10 minutes until Phil Foden, who tormented the struggling James Milner throughout, took a pass from Gabriel Jesus and fired a low, angled finish across Alisson at the Kop end.

City manager Pep Guardiola was nursing an understandable sense of injustice after Milner somehow escaped a second yellow card for blatantly upending Bernardo Silva, before Anfield exploded in joy after 76 minutes when Salah slalomed his way beyond a succession of City defenders to power home a stunning finish.

City's performance merited at least a point and secured it when De Bruyne's shot took a deflection off Joel Matip to beat Alisson with nine minutes left.

The Reds should have won it with five minutes remaining but Fabinho's goalbound shot was kept out by Rodri's sensational block.

Liverpool have bullied City at Anfield in the past but the tables were turned here in the first half, the champions dominating possession and pinning the hosts back in a manner rarely seen under Klopp in recent seasons.

Klopp's side needed a spark to return to at least something like their normal selves and it was talisman Salah who provided it with a virtuoso second-half performance. 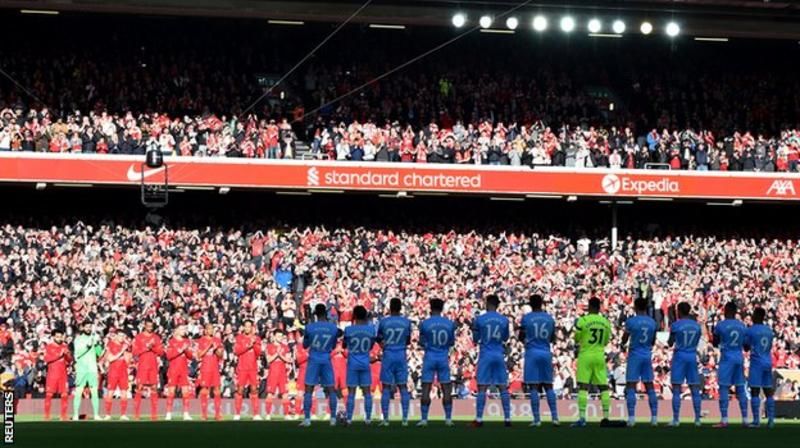 Before kick-off, Anfield paid tribute to former Liverpool and England striker Roger Hunt, who died at the age of 83 last week

The Egyptian first of all showed his class to set up Mane for a goal that was against the overall run of play but was the result of Liverpool increasing the pace at the start of the second half. Salah's run and pass was sheer perfection and his attacking partner gratefully accepted the invitation to finish in style.

And after the excellent Foden drew City level, Salah scored a goal that will live long in the memory as he twisted and turned in between a host of City defenders before lashing an unstoppable finish past Ederson.

It was a goal worthy of winning any match, but in reality Liverpool could not complain at only getting a point as they struggled to exert their authority.

Salah's masterclass, however, showed once again that he truly belongs among the game's elite.

Foden shows his class for City

Foden's importance for City was also emphasised as he gave Milner a nightmare for the 78 minutes the Liverpool veteran was on the pitch, and scored a crucial equaliser just as The Kop sensed their side had finally established supremacy.

Milner, in at right-back with Trent Alexander-Arnold injured, simply could not cope with Foden, escaping with a foul on the edge of the area that was not given then being booked for hauling the youngster down in desperate fashion.

City were clearly determined to probe the right-hand side of Liverpool's defence where Milner was not actually receiving too much assistance, and it was no surprise that Foden found himself in space to give Allison no chance with a fine finish to level.

This was a good response from City to their midweek Champions League loss to Paris St-Germain, although once against questions will be raised about the lack of a recognised striker when a host of first-half chances were not taken.

City's play was measured and, with Ruben Dias and Aymeric Laporte solid at the back, it took those two moments of rare skill by Salah to unlock them.

It would have been harsh on City had they not got at least a point and Guardiola's joy was obvious when De Bruyne got the leveller, albeit he was running hot with fury at the time after referee Paul Tierney decided against giving that second yellow card to Milner - earning one himself as his vociferous protests continued after Salah had restored Liverpool's lead.

City have performed impressively against the two teams widely regard as their closest Premier League title rivals in the last eight days, winning at Chelsea then coming away with a point at Anfield.

Guardiola will regard four points as a reasonable return and will be highly satisfied that his team could have had the maximum, even pressing for a winner in the closing moments.

The most decisive contribution in this frantic finale, however, came from Rodri as he somehow blocked Fabinho in a packed goalmouth when he looked certain to score the match-winner.

He made a crucial intervention and Guardiola was all smiles again at the final whistle.