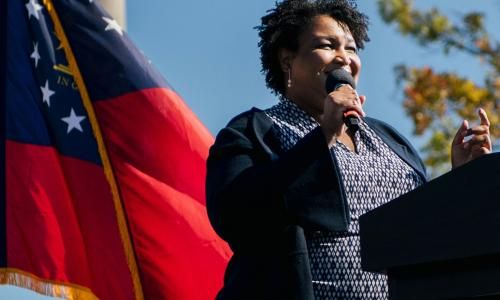 Now, Abrams herself has joined the “Romancing the Runoff” fundraiser, and has donated a copy of the first of her eight published romance novels--one signed with both her real name, and her pen name, Selena Montgomery.

“I’m privileged to be one of you,” Abrams wrote on Twitter, praising the romance authors’ “amazing” fundraising efforts.

Abrams’ work fighting against suppression of black voters and organizing voter registration efforts is widely credited with helping Joe Biden become the first Democratic presidential candidate to win Georgia in more than a quarter century. Democrats have said her work was “pivotal” in flipping Wisconsin and other battleground states.

Since election day, Abrams has not stopped fighting: a January runoff between two pairs of Democratic and Republican candidates in Georgia will determine whether Republicans maintain control of the US senate – and have the votes to block Democrats and the incoming Biden administration from enacting any substantial new policy agenda.

In the week after the election, Abrams helped raise $3.6m in just two days to help campaigns for the Georgia Democrats Jon Ossoff and Raphael Warnock as they fight re-matches in a runoff election against the incumbent Republican senators David Perdue and Kelly Loeffler.

Meanwhile other American romance novelists, many of whom have active social media platforms, began organizing to auction off romance-novel related items to support the Democratic candidates through donations to the New Georgia Project, Black Voters Matter, and Fair Fight, the voting rights group Abrams founded.

“Democracy only thrives when every vote can be cast and counted, and we are fighting to help dismantle the legacy of voter suppression in Georgia,” the four bestselling authors who organized the auction said in a statement.

Political activism is not a new development in the American romance writing community, which has been fighting fierce battles over entrenched racism in the publishing industry, as well as within their own industry trade group, the Romance Writers of America, for years.

But the Georgia fundraising effort is also a testament to romance novelists’ pride in Abrams, who has continued to tout her work as an author of romantic suspense, even as she has become a star in national Democratic politics and a bestselling author of political nonfiction, including her memoir, Lead from the Outside.

When writers who got their start publishing romance novels move on to more prestigious genres, “they sometimes back away from romance, like it’s this dirty secret in their past: ‘Oh, I don’t write those kinds of books any more,’” the author Courtney Milan, one of the auction’s organizers, said. “Stacey Abrams has never once done that to us.”

“She’s not playing the game of trying to advance where she is by denigrating where she’s been,” Milan said. “She’s very clear that she doesn’t think any apologies are needed, which they aren’t.

“I revel in having been able to be a part of a genre that is read by millions and millions of women, in part because it respects who they are,” Abrams told Entertainment Weekly in an interview in 2018, when she was campaigning to be governor of Georgia.

Asked by the Washington Post how she would respond to people who made fun of the romance genre, Abrams wrote: “Telling a well-crafted story is hard. Full stop. Regardless of genre, good writing is good writing”. She added that she was “honored to be in the company of extraordinary writers.”

The “Romancing the Runoff” auction had grown past its initial goal of raising $20,000, Milan said, as a wide range of authors and romance fans donated thousands of items, including first editions of romance novels, including the first Harlequin novel published by a black author, Sandra Kitt’s Rites of Spring; one-on-one sessions for writing advice, a chicken recipe from Dame Barbara Cartland, and handmade crafts, such as a “blue wave” crocheted scarf to a hand-embroidered sampler reading “F*ck the GOP”.

The fantasy and science fiction novelist Neil Gaiman also joined the effort, donating a signed collector’s edition of one of his novels that sold for $4,590.

A spokesperson for Fair Fight did not immediately respond to a request for additional comment about the Romancing the Runoff fundraiser beyond Abrams’ tweet.

Milan said she had “no clue” how much money the copy of Abrams’ own signed romance novel might raise for the Georgia election, but she expected it would “easily be four figures”.

Hundreds of millions of dollars will be spent on political advertising in Georgia in the weeks before the runoff election on 5 January, NBC News reported this week, with at least $46m already spent since election day.