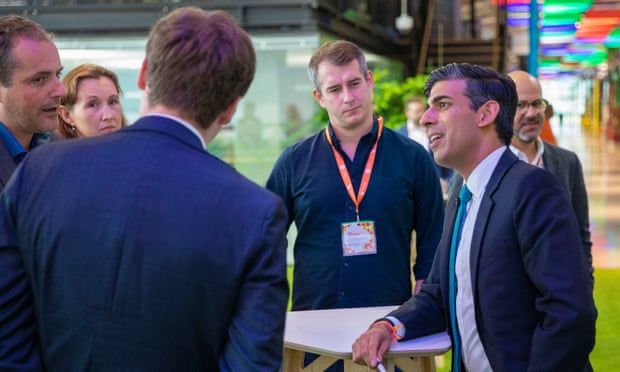 Rishi Sunak has given his blessing to a multibillion-pound trend that has seen foreign private equity firms snap up British businesses, describing the buying spree as “good news” for the economy.

The chancellor was speaking at the launch of Treasury Connect, an event intended to bring together fast-growing tech businesses with investors and politicians to spur innovation in areas such as fintech and life sciences.

Addressing a trend in which overseas buyers target UK firms, with supermarket Morrisons set to be the latest to fall, Sunak said: “We’ve always been an economy that benefits from investment in it.

“I would view it as a sign of confidence in the UK. It’s good news for our economy.”

Private equity investors from abroad spent nearly £25bn on British firms between the start of 2021 and mid-August, according to figures from Dealogic, compared with £28bn for the whole of 2020 and £30bn in 2019. The figure was more than £42bn factoring in minority stakes, a record since Dealogic began tracking the data in 2005.

Morrisons, the UK’s fourth-largest supermarket chain, is edging closer to a £7bn takeover by the US private equity group Clayton, Dubilier & Rice, while private equity-owned Cobham has agreed to buy defence company Ultra Electronics for £2.6bn.

Household names that have already been snapped up by private equity since the start of the pandemic include the supermarket group Asda, the roadside assistance company AA, the infrastructure firm John Laing and the insurer LV, among many others.

The chancellor welcomed the trend as he launched a drive to stoke greater investment in cutting-edge technology firms at the event in the Olympic Village in Stratford, east London.

Sunak has focused heavily on technology during his tenure, via policies that the Treasury says are intended to make the UK a “science superpower”.

These include the launch of a Future Fund that involves the government taking stakes in more than 150 businesses, according to new data released on Tuesday.

As well as tech champions, they include a kombucha drinks maker, a bespoke shipbuilder plus a knitting and crochet supplier.

Sunak said the government was creating the conditions for the UK to host tech businesses capable of rivalling Silicon Valley giants.

He said this was happening via the Future Fund, as well as through initiatives such as Treasury Connect to help them access finance and political encouragement for pension funds to invest in riskier, fast-growing businesses.

But he declined to comment on the £29bn takeover of Cambridge-based Arm by US firm Nvidia, which has raised concerns about the UK’s inability to retain domestic control of world-leading businesses.

Arm is already owned by Japan’s SoftBank but the proposed Nvidia deal has fuelled fears about whether investment and jobs will stay in the UK.

Asked if he would welcome SoftBank listing Arm in the UK if the Nvidia deal collapses, Sunak said he could not comment on an ongoing process but said that “in general” he wanted to make the UK an attractive place for companies to go public.

Sunak has already moved to ease stock market listing rules in the hope that London can compete for lucrative and prestigious floats of tech champions.

Takeaway app Deliveroo’s listing helped Sunak launch the policy, while life sciences group Oxford Nanopore, whose DNA sequencing technology was snapped up by the UK government and used to track virus variants, has since announced its own £2.4bn London float.
Add Comment