Richard Osman: Trying to make the world a better place

This time last year Richard Osman was at a metaphorical base camp staring up at the summit of success as he unleashed his debut novel into the world.

Even with the weight of celebrity behind the Pointless and House of Games TV star, nothing was guaranteed.

Making it as an author is a precarious business, one where even the most talented flounder, never more so than when a pandemic sees bookshops close and puts paid to promotional tours.

But what happened next for Osman's The Thursday Murder Club has now become the stuff of publishing folklore.

The story about four elderly amateur sleuths broke sales records and soared to the pinnacle of the best-sellers' list in the UK. It has also proved a hit in the other countries where it's been released.

And then there's the not insignificant matter of Steven Spielberg snapping up the movie rights.

Osman is not complacent about his achievement. "I've been through my creative life with great TV shows that fail and not-so-great that succeed so I'm rarely surprised by anything. But I'm humbled and amazed.

"I'm thinking, 'What a lovely thing to have happened and I get such lovely comments in the street, but I'm with Kipling on success and failure, you have to treat them in just the same way."

Not resting on his laurels, Osman ploughed on with his game shows as soon as filming restrictions were eased.

He moved house, bought a long coveted American pool table, and even had a spell in hospital with a poorly knee. More pertinently, he also squeezed in a second instalment in the lives of his elderly heroes entitled The Man Who Died Twice, due for release this week.

The new book, Osman says, stays true to the non-patronising spirit of his debut, in which the Coopers Chase retirement village protagonists were one step ahead of the police in solving the murder mystery unfolding on their doorstep.

"No one is patting them on the back and saying, 'Aren't you good for 80?' They are genuinely smart, funny, kind, strong human beings," he says.

"There are sections of our society that are overlooked, and perhaps people in their late 70s onwards are one them and it's very nice to see them have their day."

But as a TV man for more than 20 years (many spent at the production and distribution company Endemol), Osman knows how easily an audience can be lost, through any number of subtle reasons. If monotony is just one, then The Man Who Died Twice pushes hard to dodge that curveball.

A hefty dose of adrenaline has been injected into this new story. At its core is a high body count cat-and-mouse chase beyond the boundaries of Coopers Chase to recover £20m of stolen diamonds. 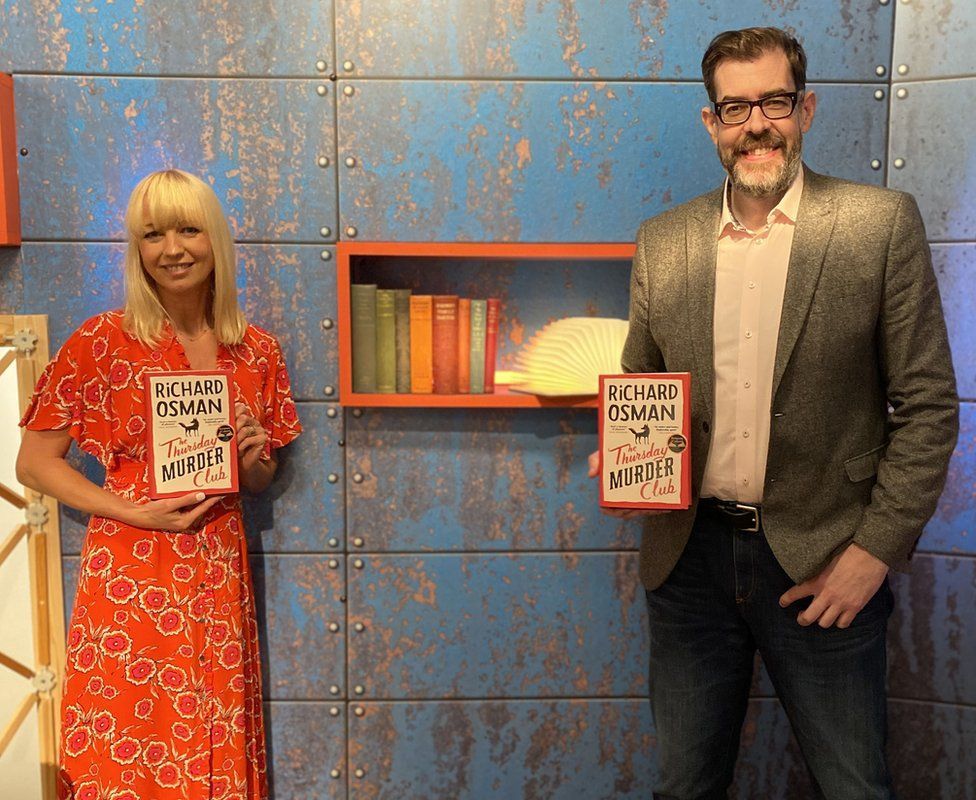 And this time we're not dealing with greedy property developers but top-shelf criminals, including the Mafia, corrupt MI5 agents, drug dealers and money launderers.

"Someone the other day said it was almost like Miss Marple meets James Bond," says Osman. "I wanted what happens to come from truth, they are all things that could happen or have happened."

Not descending into farce is a "fine line", says Osman but adds: "The truth is a gifted amateur is better than a professional criminal - their fatal flaw is that they are criminals. They are constantly looking over their shoulders.

"We think of the Moriarty figures and the truth is most criminals are fairly mundane, and if they are not mundane they're violent and thuggish and easier to catch. I think my mum could catch pretty much any criminal in Britain."

Thankfully, he confirms he has no working knowledge of the Mafia. "And with MI5, if I had had to talk to people for inside info, I couldn't possibly comment but I will say there are accuracies in what's represented." The stakes might be higher in this new story, but so too is the emphasis on the frailty of older age, the risk of dementia and the inevitability of death. Pretty much everyone who crosses the scene has at some point an internal monologue on the meaning of life and its fleeting nature.

"I go to see my mum a lot in her retirement community everyone is very open about it," says Osman.

"There is before a certain age, an idea that it's taboo to talk about death in our culture and then you get to that certain age and you think, 'We better start talking about it now because it is going to happen.' They tend to take a nuanced, sanguine view of the whole thing. I wanted to get that across in a way that is refreshing and possibly even calming."

Yet when one of the elderly crew is mugged and badly beaten up, he sinks into a state of depression and vows never to leave his house again.

Caroline Abrahams, Charity Director at Age UK, says: "We know that many older people worry about becoming a victim of violent crime, at home or on the street, even though statistically the chances of this happening to them are minute.

"However, if an older person is unlucky enough to be victimised in this way the emotional consequences can be devastating, leaving them chronically lacking in self-confidence, especially if they live alone.

"In this situation it's a good idea to take advantage of the follow up help offered by Victim Support. The love and support of friends and family can really help too. In the end it's up to the older person to choose the kind of help they need." Happily the victim's friends rally round and demonstrate Ms Abrahams' point. And Osman believes literature can play a powerful role in opening people's eyes and improving attitudes, not only towards the elderly, but all sectors of society.

Many of the characters Osman presents berate themselves for missed opportunities, and actions they shouldn't have taken. But Osman's philosophy is that we "shouldn't have regrets, live life forwards, you've got to let most things go".

"We hold ourselves prisoners to our pasts sometimes and it's not necessary. The most amazing thing that can happen to you could start today, we never know."

Looking to Osman's future, he says shooting on the adaptation of his first book is scheduled to begin next year - but he won't be involved.

"I'm letting them get on with it," he says "I get nice emails every now and then to let me know what's going on. But I never count my chickens where films are concerned. TV is bad enough but with film, anything could happen at any time."

However, he does aim to pursue new ventures on the small screen. "I'm having fun with ideas at the moment. I'm talking to Netflix about a show, and elsewhere about doing a bit more presenting. But I can't give anything away."

And on the decidedly offbeat side - a characteristic which endears him to his TV fans - he has a master plan to make waves in the world of chocolate. "There's room for another player in that market of big boxes of chocolates at Christmas. So Cadbury's, get in touch."