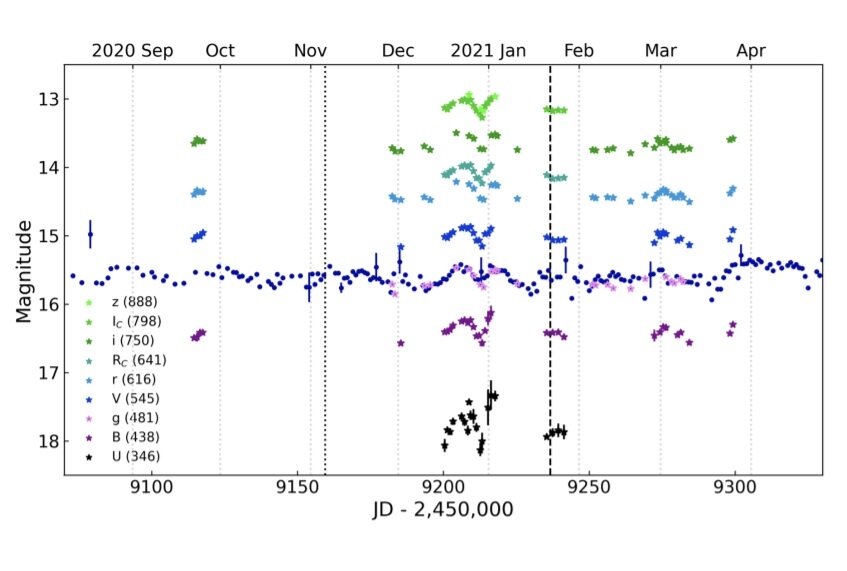 An international team of astronomers has performed photometric and spectroscopic observations of a peculiar eruptive young star known as V899 Mon. Results of the observational campaign shed more light on the nature of this star. The research was detailed in a paper published September 23 on arXiv.org.

Located some 2,600 light years away near the Monoceros R2 molecular cloud, V899 Mon (also known as IRAS 06068-0641) is an eruptive young stellar object (YSO). The star is estimated to be about two times more massive than the sun and its radius is most likely between four and six solar radii.

Previous observations have shown that V899 Mon has experienced a very bright outburst that started in November 2009 and reached its peak brightness in 2010. Afterward, it went back to quiescence for a relatively short period in 2011 and brightened again in 2012. However, the observations conducted during the bursting period of V899 Mon have not provided enough data to get further insights into the nature of this object.

In general, YSOs are classified as FU Orionis-type objects (FUors) or EX Lupi-type objects (EXors). FUors brighten by more than magnitude 4 in the optical domain and remain in their brightened state for several decades. EXors also brighten by a few magnitude, but unlike FUors, they remain in the high brightness stage for a few months to a few years. In the case of V899 Mon, its classification is still uncertain.

Therefore, a group of astronomers led by Sunkyung Park of Konkoly Observatory in Budapest, Hungary, multifilter optical photometric monitoring, as well as optical and near-infrared spectroscopic observations of V899 Mon in order to find out whether this YSO is a FUor or an EXor, and to learn more about its properties.

The observations found that the second peak of the outburst of V899 Mon occurred in 2018. Since then, the brightness of the star has gradually decreased with an approximate rate of 0.30 mag per year. The most dramatically strong burst occurred in the 2017–2018 season, and it lasted for about 200 days. Then, again, a shorter and weaker accretion burst was observed in the 2020/2021 season.

The study found that in the case of V899 Mon, the small amplitude of photometric variations, rich emission lines, measured mass accretion rate, and mass loss rate show similar properties to those of classical T Tauri-type stars (CTTS). Furthermore, the gradual decreasing of V899 Mon suggests that it is almost finishing its second outburst, and is now on the way back to the quiescent phase.

Taking into account all the results, the researchers assume that V899 Mon is most likely of the EXor type.

"Our recent photometric and spectroscopic observations of V899 Mon in the current evolutionary stage show more features typical for EXors," the authors of the paper concluded.
Add Comment