People across the UK fell silent on Remembrance Sunday as King Charles led the nation in honouring servicemen and women who died in past conflicts.

A national two-minute silence was held at 11:00 GMT, with similar ceremonies at war memorials across the country.

Big Ben chimed 11 times as the silence began, with war veterans watching on.

King Charles then laid a wreath at London's Cenotaph - the first time he has done so as monarch, following the death of his mother Queen Elizabeth II.

Other royals, including the Prince of Wales, the Earl of Wessex and the Princess Royal also laid wreaths, along with the prime minister and other senior politicians.

Under grey skies earlier in the morning, people had streamed into Westminster to take part in or to observe the Remembrance Sunday ceremony.

Far outnumbering those in military uniform were the veterans; shoes gleaming, medals on their chests, a fair sprinkling of berets, backs straighter than you normally see in these parts.

The talk among these veterans, a quiet rumble of reflection, jokes, regimental rivalry - everywhere that unique bond of service to country and comrade.

Much was the same here today as in decades past; the music, the flags, the prayers, wreath upon wreath of poppies blazing red against grey stone.

But one thing was different and that difference was on the minds of many; the King led this ceremony, a ceremony so close to the heart of the late Queen and one which she attended into her nineties.

And after the wreaths of politicians and the ambassadors and military leaders had been laid alongside those of the Royal Family, the march past of veterans began.

The ring of wreaths encircling the base of the Cenotaph became a blanket for the road beneath.

And the crowds that lined Whitehall ten-deep in places applauded as those who served were given due remembrance and respect. 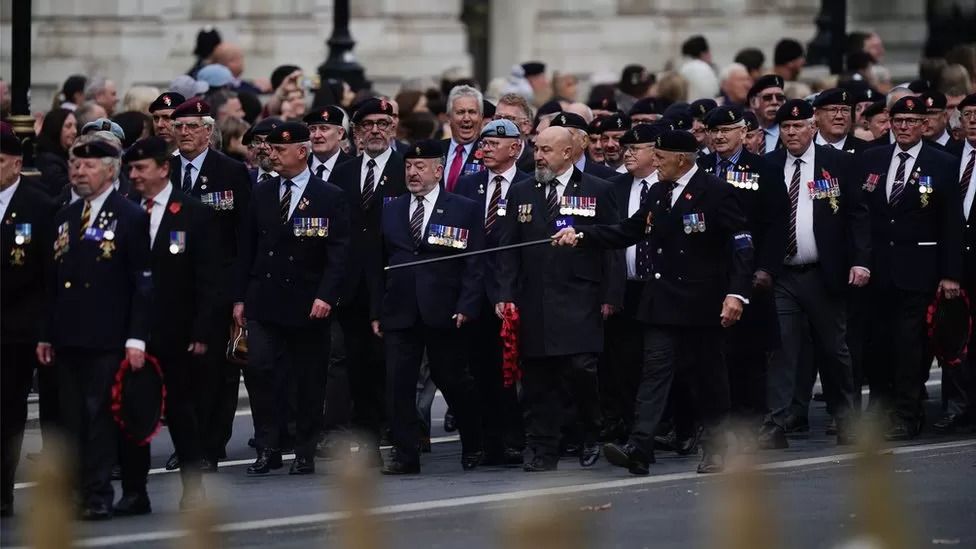 Sunday's service featured a march past by some 10,000 Royal British Legion veterans, representing 300 different armed forces and organisations between them 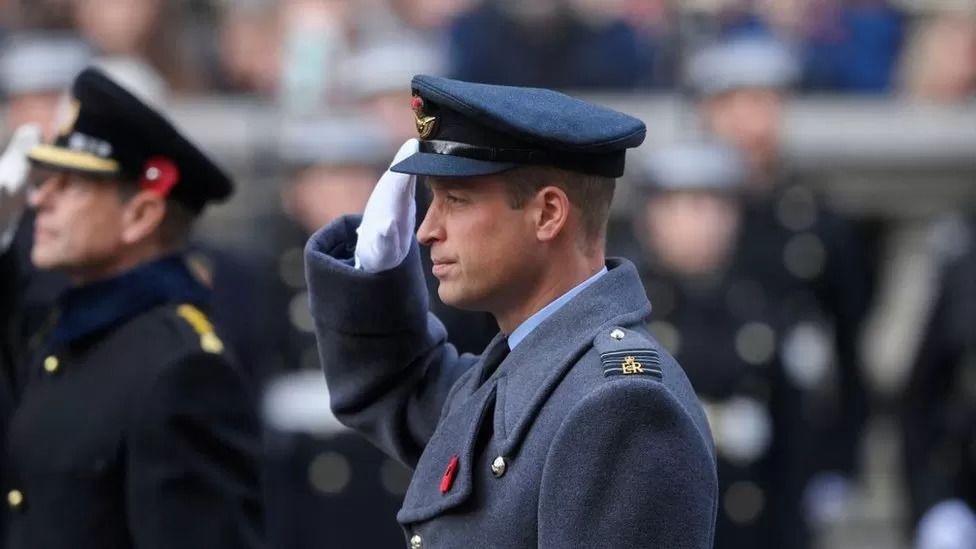 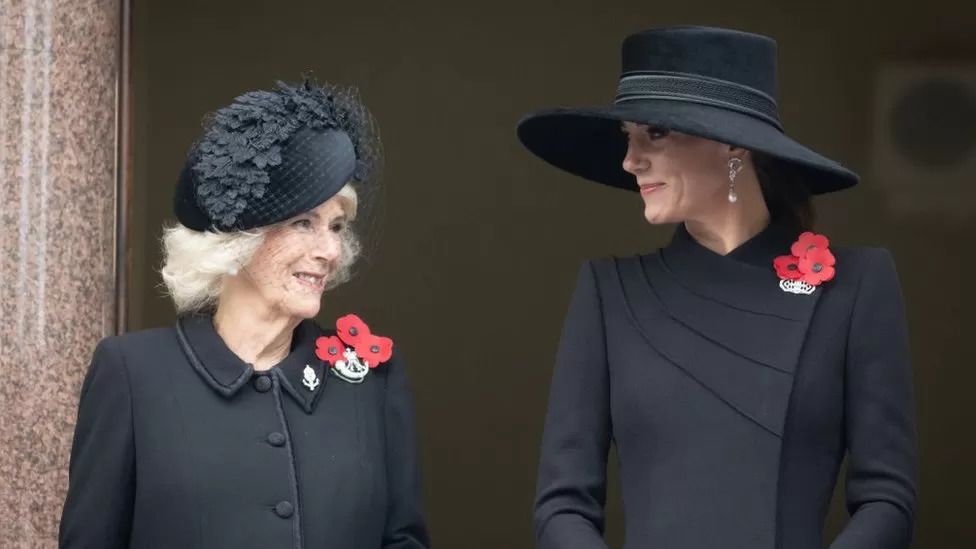 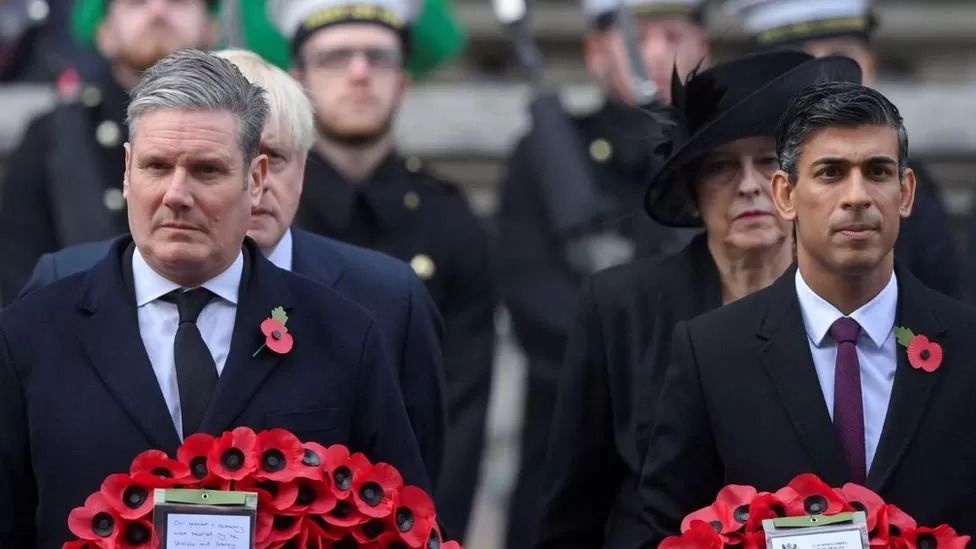 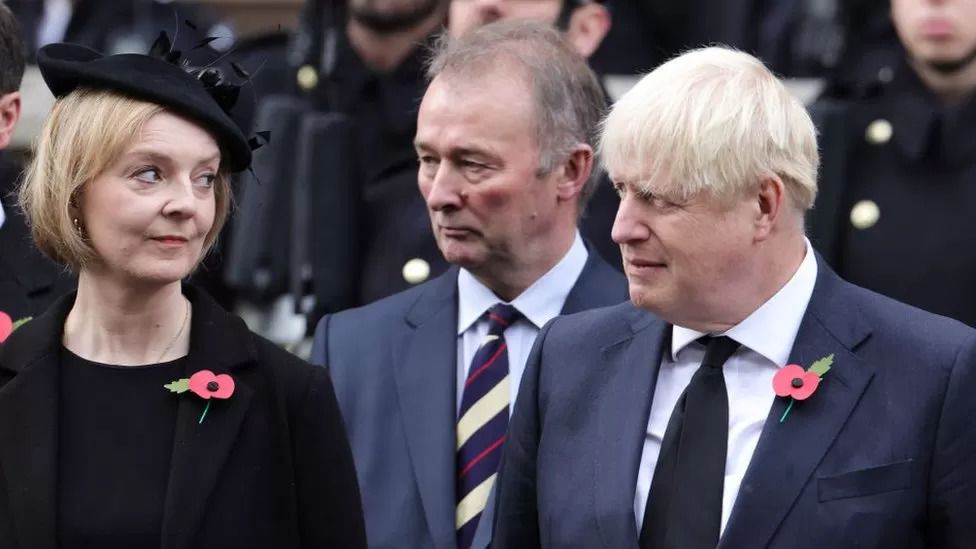 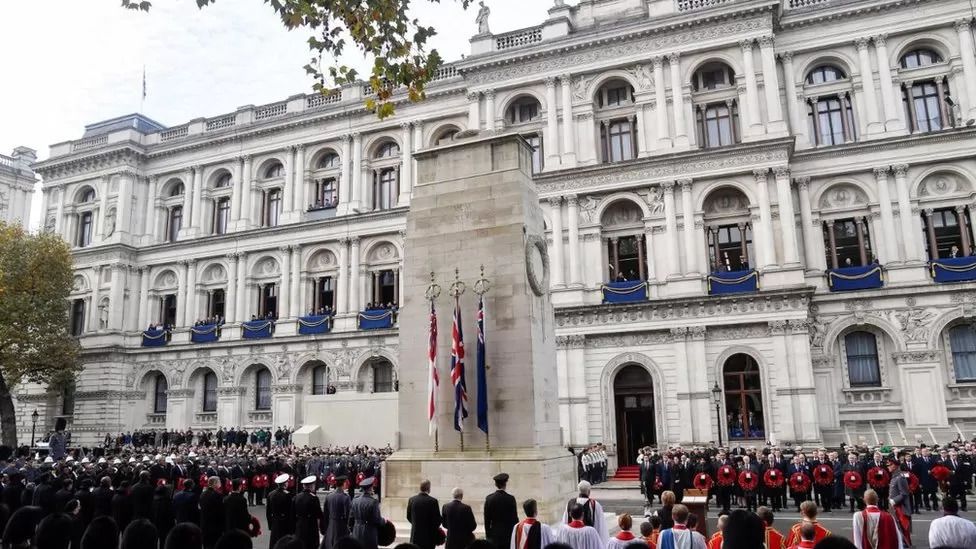 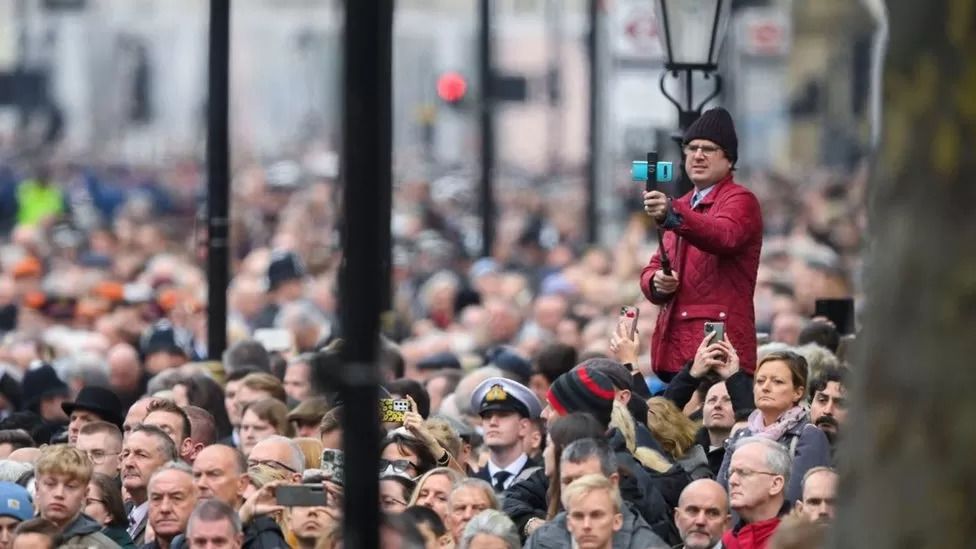 Some 10,000 people were estimated to be watching the service in central London 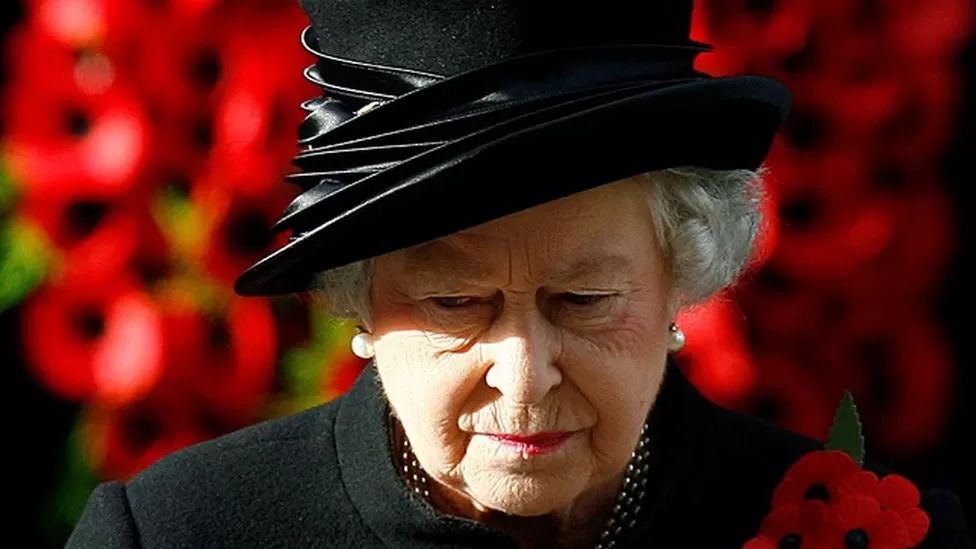 Queen Elizabeth II saw Remembrance Sunday as one of her most important engagements of the year
Chief of the Defence Staff Admiral Sir Tony Radakin, the professional head of the armed forces, said Remembrance Sunday held further poignancy following the death of the late Queen.

He said: "She represented duty and service, but also that dignity of that wartime generation and all they sacrificed for our freedom.

"And I think there's the additional poignancy that once again we have war in Europe."

Falklands War veteran Simon Weston, who suffered severe burns after his ship was bombed, told the BBC the public recognition that Remembrance Sunday gave to fallen servicemen and women and their families was very important.

He said: "Because all these people need to know that the angst and suffering that they went through when people went away is relevant and what they did was worthwhile, because even if we don't conquer, what we do is stop people from being able to perpetrate evil in the way that they were doing it."

Some of the youngest people taking part in the service included Beaver Scouts from Wimbledon and Wandle Scout District who presented a wreath to be laid at the Cenotaph.

Erin, seven, told the BBC it was a huge honour to be representing the Scout Association this year. "I was happy that I was here," she said. 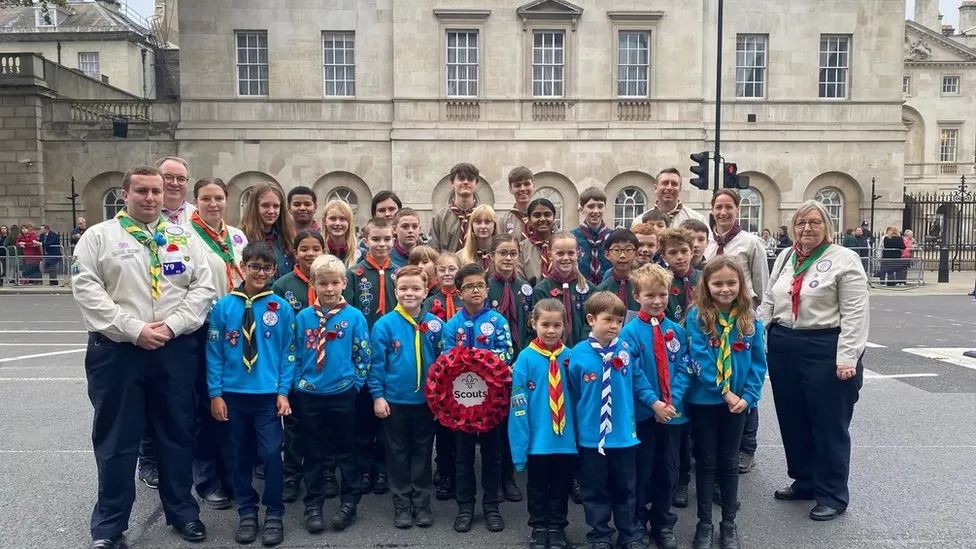 Scouts were among the youngest people taking part in the service 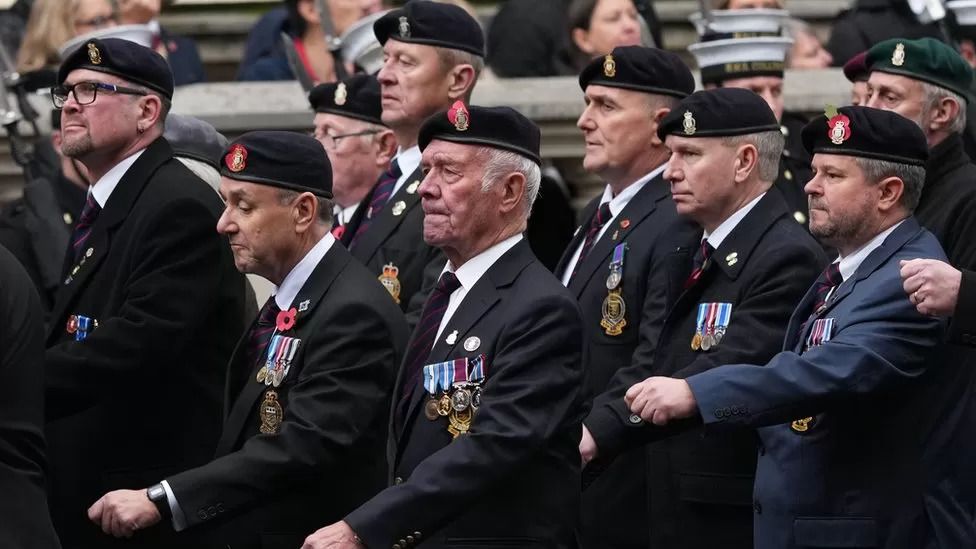 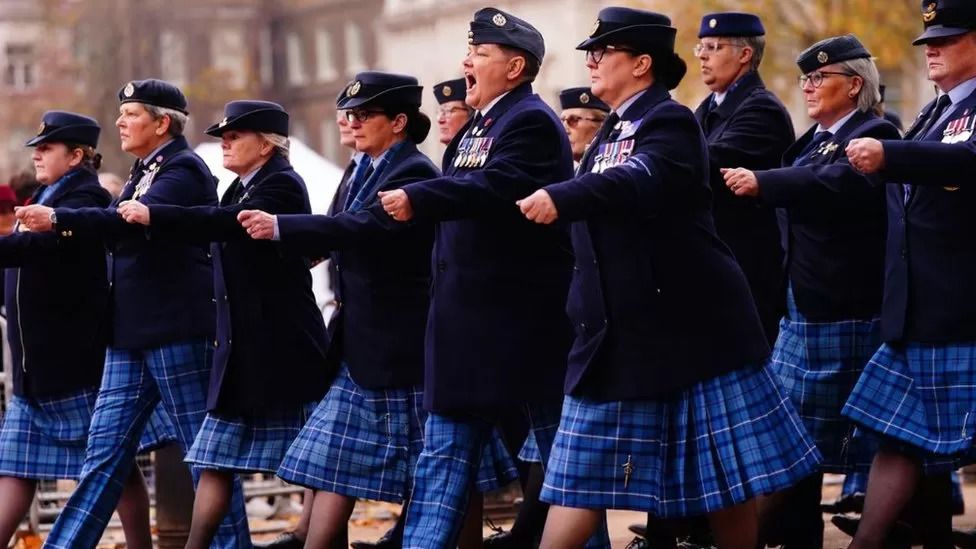 Veterans marched at Horse Guards following the parade at the Cenotaph

More than 100 Falklands War veterans and family members of those who died in the war were also to take part in a remembrance service and parade in the capital Stanley on Sunday.

They made the 8,000 mile (12,900km) journey via a special flight arranged by the Ministry of Defence, with many of the veterans making an emotional return to the Falklands for the first time since the war with Argentina broke out in 1982.

Over the past few days the veterans, along with mothers, wives and children of those who died, have visited the battlefields where British forces fought, with some shedding tears and placing crosses at cemeteries for fallen comrades and family members.

On Saturday, members of the Royal Family attended the annual Royal British Legion Festival of Remembrance at the Royal Albert Hall.

On Friday, the UK held another silence on Armistice Day to commemorate the end of World War One in 1918.

Watch: The King leads the ceremony at the Cenotaph