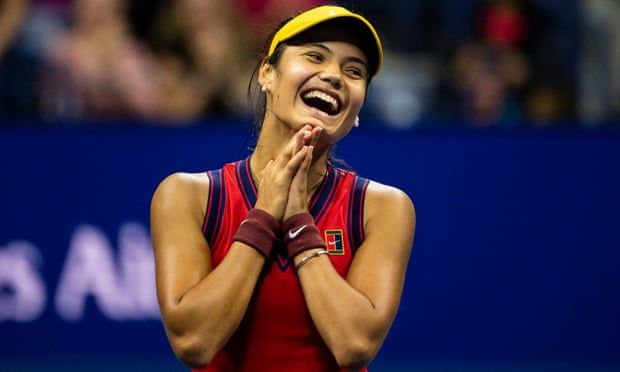 Emma Raducanu’s fairytale run to the US Open final has put her on track to become the hottest property in British sport, according to brand and sponsorship experts.

The 18-year-old, who swept aside her semi-final opponent, Maria Sakkari, in straight sets, will be the first British woman to reach a grand slam final for 44 years when she competes for the US Open title on Saturday night. For that victory she has made $1.2m (£864,000), four times her career earnings to date, and if she can triumph in the final her pay day will hit $2.5m. But that will just be the beginning.

Making it to the last 16 at Wimbledon on her grand slam debut confirmed her as the next British tennis talent but a win at the US Open would make her a global media star and a magnet for multimillion-pound sponsorship and advertising deals.

Tim Crow, a sports marketing consultant who advised Coca-Cola on football sponsorship for two decades, said: “I haven’t had this many calls from clients, major brands, who are interested in her since Lewis Hamilton broke through in Formula One. If she wins she will become one of the hottest properties in British sport, if not the hottest.”

Crow said Raducanu’s combination of youth, sporting prowess, charismatic personality and international appeal – she was born in Canada to parents from Romania and China and is a product of the British tennis system – makes her commercial gold for brands. She has a shoe and clothing contract with Nike and racquet sponsorship with Wilson.

“As far as brand appeal is concerned I think you can draw parallels with Naomi Osaka [born in Japan to a Haitian father and Japanese mother and raised in the US],” said Crow. “Because of the multicultural aspect of her heritage she is able to resonate in so many markets. She is a world citizen: she appeals so far beyond a typical white, British, middle-class female tennis player.”

Osaka is the world’s highest-paid female athlete and has total earnings of $37.4m (£27.2m), according to Forbes, and has a total of 15 corporate sponsors.

Raducanu’s earnings potential is also enhanced by the fact that she is excelling at tennis, one of the few truly global sports with the biggest endorsement deals and prize money for women, which Crow says “makes it the best sport for a woman for marketability and market potential”. The nine highest paid female athletes in the world are tennis players, according to Forbes.

Experts agree, however, that for her to become a long-term earner at top level she needs continued success.

“In order for her to really achieve the potential she has, she needs to be successful on a consistent basis,” said Neil Hopkins, global head of strategy at M&C Saatchi Sports and Entertainment.

He said the sheer brilliance she had displayed so far would interest sponsors, particularly in the UK. Tf she wins the US Open, she will be thrust into the top echelon of female players, he said.

“[Raducanu] has gone straight in at the top of tennis. You’re going to have sponsors looking at her for the potential she has. And there’s no limit to the type of organisation that could be looking at her,” said Hopkins.

“If she wins [the US Open], her earning potential will get a real boost. When we look at potential athletes for our clients to sponsor, she wouldn’t have been in the conversation a year ago, but she will feature now in lots of conversations.”

Matt Gentry, long-term agent and co-founder of Andy Murray’s agency 77 Sports Management, said she had broad global appeal and if she had continued success there was huge potential. But, he said, “given her age, it’s about being careful and considered, rather than burdening her with lots of brand partners over the next 12 months”.

Gentry said: “It’s about working with companies that, maybe she likes, or in areas she feels passionately about. Not necessarily taking the most money, the marketing investment from big brands is also important. So there are lots of considerations as to who she partners with.

“It should be tennis development first and foremost, and a slow longer-term focus on brand building.”

Financial services, consumer goods and fashion would all be interested, Gentry said. “It’s sky high in terms of potential for her, and not just in the UK. There will be many global companies keen to be part of her journey.”
Add Comment