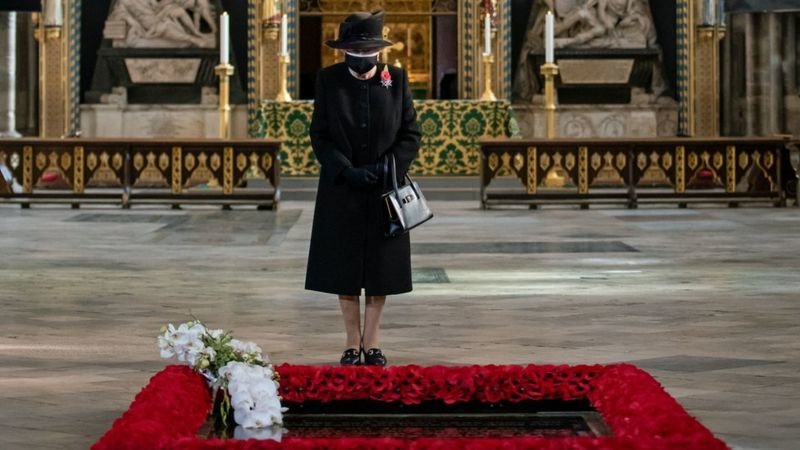 The Queen has worn a face mask in public for the first time.

On Wednesday, the monarch, 94, made a private pilgrimage to the grave of the Unknown Warrior in Westminster Abbey to mark the centenary of his burial.

It comes ahead of Remembrance Day commemorations on Sunday. She requested the service after some events were scaled back due to the pandemic.

Face coverings are required by law in England in certain indoor settings, including places of worship.

The Queen was last seen in public when she visited Porton Down, near Salisbury, to meet scientists at the Defence Science and Technology Laboratory (DSTL), in October, alongside her grandson, Prince William. She did not wear a mask on that occasion, and neither did the prince. 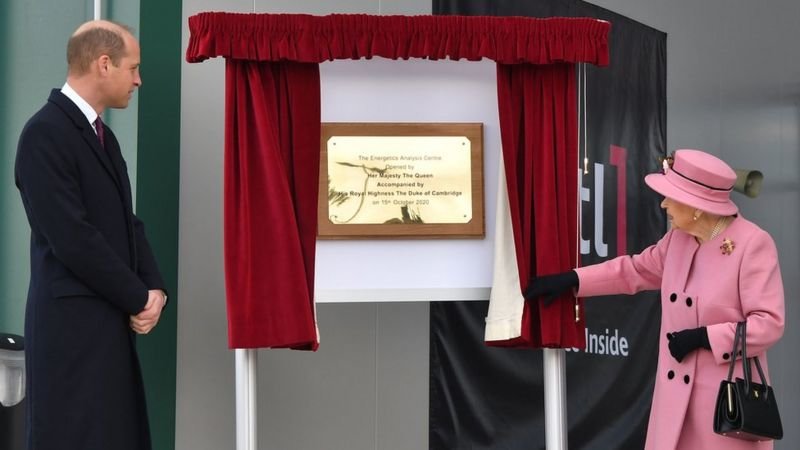 That decision attracted criticism from the pressure group Republic, but a Buckingham Palace spokeswoman said at the time that "specific advice had been sought... and all necessary precautions taken".

The Queen's attendance at the private ceremony in London at Westminster Abbey earlier this week was described as a "simple but deeply personal act".

"The grave of the Unknown Warrior is as relevant and poignant today as it was when Her Majesty's grandfather and father stood in the Abbey at its side 100 years ago," said a royal aide.

"It holds enormous significance for the country and the Royal Family. The Queen was keen that the centenary was marked appropriately." 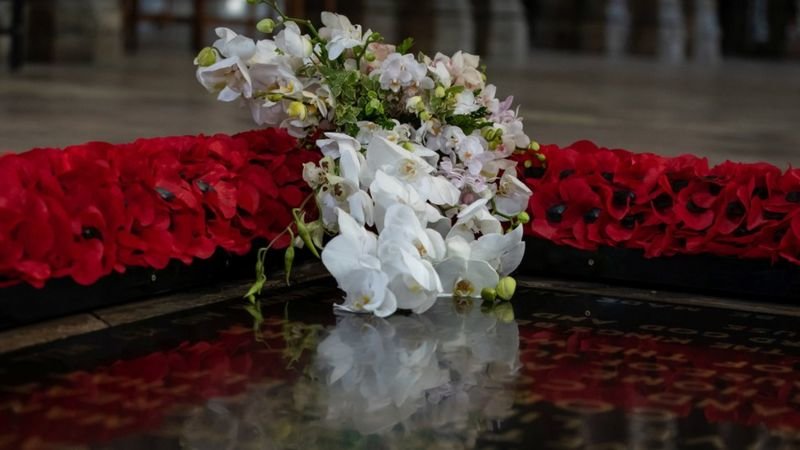 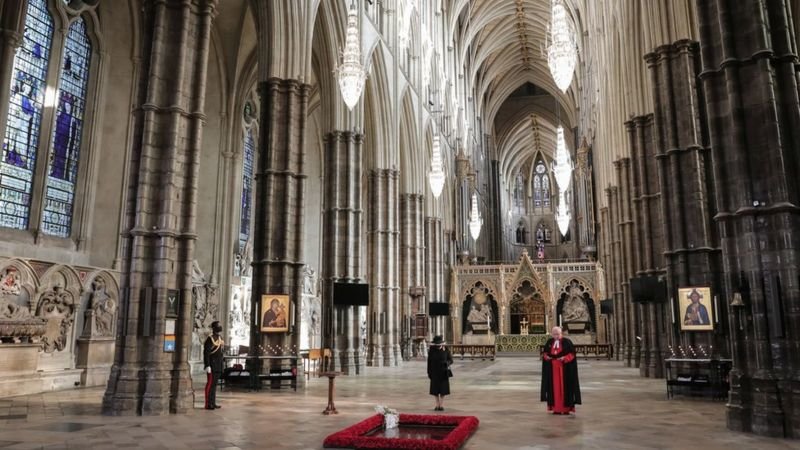 The grave of the Unknown Warrior represents those who died in World War One whose place of death is not known, or whose remains are unidentified.

The brief service was attended only by the Dean of Westminster, Dr David Hoyle, and the Queen's Equerry, Lieutenant Colonel Nana Kofi Twumasi-Ankrah, after royal doctors advised limiting the numbers.

In keeping with a tradition established by her mother in 1923, the Queen - who was married at the Abbey in November 1947 - left a bouquet based on her own wedding flowes at the grave, close to Westminster Abbey's Great West Door.

That was followed by a prayer, recited by the Dean, and the lament Flowers of the Forest played by the Queen's piper, Pipe Major Richard Grisdale, who stood in the organ loft.

Speaking after the service, the Dean said: "It was wonderful to see Her Majesty in such good spirits and good health.

"This is a moment where the Abbey does its job as the national place of worship. The story of the Unknown Warrior touches us all.

"It's very hard for all churches to shut their doors, it goes against everything we are ordained to do, which is to gather people together. Like so many communities, we're divided and that's difficult.

"It is very special for Her Majesty to do this, given the current restrictions. I know, because people tell me, that these moments when Her Majesty is in the Abbey gives us a sense of renewed purpose and encouragement. It makes us feel very privileged."

The Queen, who spent the first lockdown shielding at Windsor Castle, was advised against attending a service at the Abbey to mark the warrior's centenary

on Armistice Day, next Wednesday, when the Prince of Wales and Duchess of Cornwall will join the congregation.